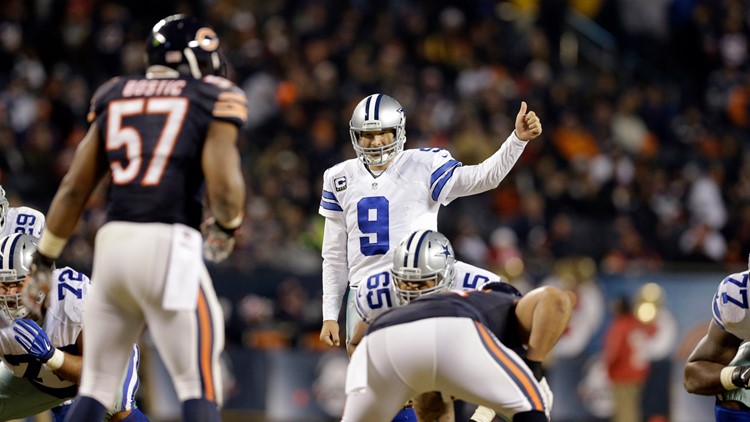 Photo by: AP
Dallas Cowboys quarterback Tony Romo (9) calls a play during the second half of an NFL football game against the Chicago Bears Thursday, Dec. 4, 2014, in Chicago. (AP Photo/Nam Y. Huh)

Memory Lane: Cowboys open December with win at Chicago in 2014

In 2014, the Dallas Cowboys suffered an embarrassing Thanksgiving Day loss, the season was over, they weren't going to make the playoffs, and it was emblematic of Jason Garrett's final season on his current contract.

The Cowboys were a paper tiger with an 8-4 record that was "in the hunt." A combination of tiebreakers gave the Seattle Seahawks and Detroit Lions, also 8-4, the last two wild-card spots. The Philadelphia Eagles, who thumped Dallas at AT&T Stadium 33-10 on Turkey Day, were in the driver's seat in the NFC East with a 9-3 record and halfway towards sweeping the Cowboys.

Dallas was falling apart, and they had chinks in their armor that showed maybe they weren't good enough for the postseason, even if they qualified.

The first game of the daunting December slate was at the Chicago Bears on Dec. 4, a Thursday night game at Soldier Field. The year before when Dallas played Chicago the week after Thanksgiving, the Bears blew out the Cowboys 45-28, and that was with backup quarterback Josh McCown. What would they do with Jay Cutler under center throwing to receivers Alshon Jeffery and Brandon Marshall along with tight end Martellus Bennett? Records didn't matter; the Bears were 5-7, but they were 6-6 and on a two-game losing streak the previous year.

Could the Cowboys expect to get a key December win against a team that had beaten them the last three times?

It helped that the temperature was 35 degrees as opposed to eight as in 2013. Dallas won the toss, took the ball, and marched down to the Bears' 34-yard line where quarterback Tony Romo took a sack on third-and-2. Dallas elected to punt rather than send kicker Dan Bailey on for a 54-yard field goal.

The Cowboys defense allowed two third-down conversions on the Bears' first drive, but dropped running back Matt Forte for a 6-yard loss on first-and-10 from the 50 that culminated in a failed third-and-16 attempt.

Dallas similarly was unable to get anything substantive going with just one first down on their second drive. However, the Dallas defense was finding its ability to stuff the Bears, unlike in 2013, as they turned Chicago three-and-out on the ensuing possession.

In the second quarter, the Cowboys finally played to their identity and capped off a 12-play, 51-yard drive with a DeMarco Murray 1-yard touchdown run on fourth-and-goal. Dallas featured the eventual NFL rushing champion on nine of their plays with the fourth-year running back, who was also in a contract year, gaining 46 of those yards.

The big-play Chicago offense was also finding its stride Marshall caught a 42-yard pass to spark a seven-play, 80-yard scoring drive that Bennett finished with a 12-yard touchdown catch against his old team.

What typified the 2014 Cowboys was their ability to melt clock. Dallas got the ball back with 6:06 to go until halftime. By the time receiver Cole Beasley scored a 13-yard touchdown, Dallas left eight seconds on the clock, and took the lead 14-7 at the break.

Chicago got the ball to start the second half, but they didn't have it for long. On a third-and-8, Forte ostensibly converted with a 21-yard catch, but linebacker Anthony Spencer – who was having a comeback season after having 2013 robbed with a "bone bruise" that limited him to one game – forced a fumble that cornerback Sterling Moore recovered and returned to the Chicago 31.

Three plays later, on a third-and-3 from the Bears' 24-yard line, Romo connected with Beasley for a touchdown to push Dallas ahead 21-7.

Just as Chicago ran away from Dallas in the second half of the 2013 game with 18 unanswered points throughout the third and early fourth quarter, it seemed the Cowboys were paying back the Bears. After taking a 14-point lead, Dallas forced a Bears three-and-out. Dallas completed a four-play drive with a 6-yard Gavin Escobar touchdown catch, but the drive was largely aided by Dez Bryant's 43-yard catch on the first play.

Chicago got two first downs on their next two drives, but ultimately punted. The Cowboys continued their onslaught as second-year running back Joseph Randle rushed for a 17-yard touchdown, which was really a sign the situation was getting insurmountable for Chicago as Dallas led 35-7 with 2:02 to go in the third quarter.

As optimistic as the game seemed, it was starting to take on another customary tenor all too familiar with the Garrett era. The Bears were slowly clawing their way back into the game with Jeffery catching a 27-yard touchdown pass with 14:52 left in the fourth quarter. Dallas answered with a field goal, and it was 38-13 Dallas with 12:13 left to play.

However, Chicago answered back with Forte scoring a 1-yard touchdown, the Bears recovering an onside kick, and then Cutler running for a 10-yard touchdown.

The Cowboys, who led by as many as 28 points, now had a 10-point lead with 6:08 to go in the game and the Bears having two timeouts and the two-minute warning.

The scenario was all too reminiscent of the Green Bay Packers game on Dec. 15, 2013, when Dallas led 36-24 with 4:17 to go. The Cowboys gave up their double-digit, two-score lead to quarterback Matt Flynn and ended up losing 37-36.

Was it happening again?

It might. The Cowboys, unlike at the end of the first half when they got the ball with a little over six minutes left, weren't able to take much time off the clock and settled for a 27-yard Bailey field goal to make it 41-28. The Bears had just one timeout left and the two-minute warning with 3:31 left. But if they could get a quick score, which they already demonstrated they could do, even with Marshall knocked out of the game, and get an onside kick, which they had already recovered, they could prove to the whole world on prime time television that, despite the 6-1 start, despite Murray's historic rushing numbers, despite how phenomenal broke-back, 34-year-old Romo was playing, they were still the same old Cowboys under Garrett.

The Bears' drive took a little longer than they would have liked, but still had promise with a fourth-and-2 from the Dallas 10-yard line with 1:35 left and one timeout. Cornerback Orlando Scandrick, who missed two games that season due to a suspension for violating the NFL's substance-abuse policy, picked off Cutler's pass at the 3-yard line to end the game.

Scandrick, who was remorseful for letting his teammates down with his suspension, came through for them to secure their first win of a four-game December winning streak that would wrest control of the division from the Eagles, give Dallas a home wild-card game, get them a no-catch away from the NFC championship game, and help Coach Garrett get that contract extension.

The Cowboys are in virtually the same scenario five years later, except they are the team in control of their own destiny and first place in the NFC East. It took one win in Chicago on a Thursday night to erase the doubts and spark a winning streak that changed the franchise's fortunes.

Only six players from that Dec. 4, 2014, game-day roster are still with the team: Jason Witten, Tyron Smith, Zack Martin, Travis Frederick, L.P. Ladouceur, and Chris Jones. However, the goal for the other 43 is the same as it was for the 2014 version: start December with a win.

Will Dallas see history repeat itself in Chicago with a win on Thursday to open December? Share your thoughts and memories of Cowboys vs Bears with Mark on Twitter @therealmarklane.