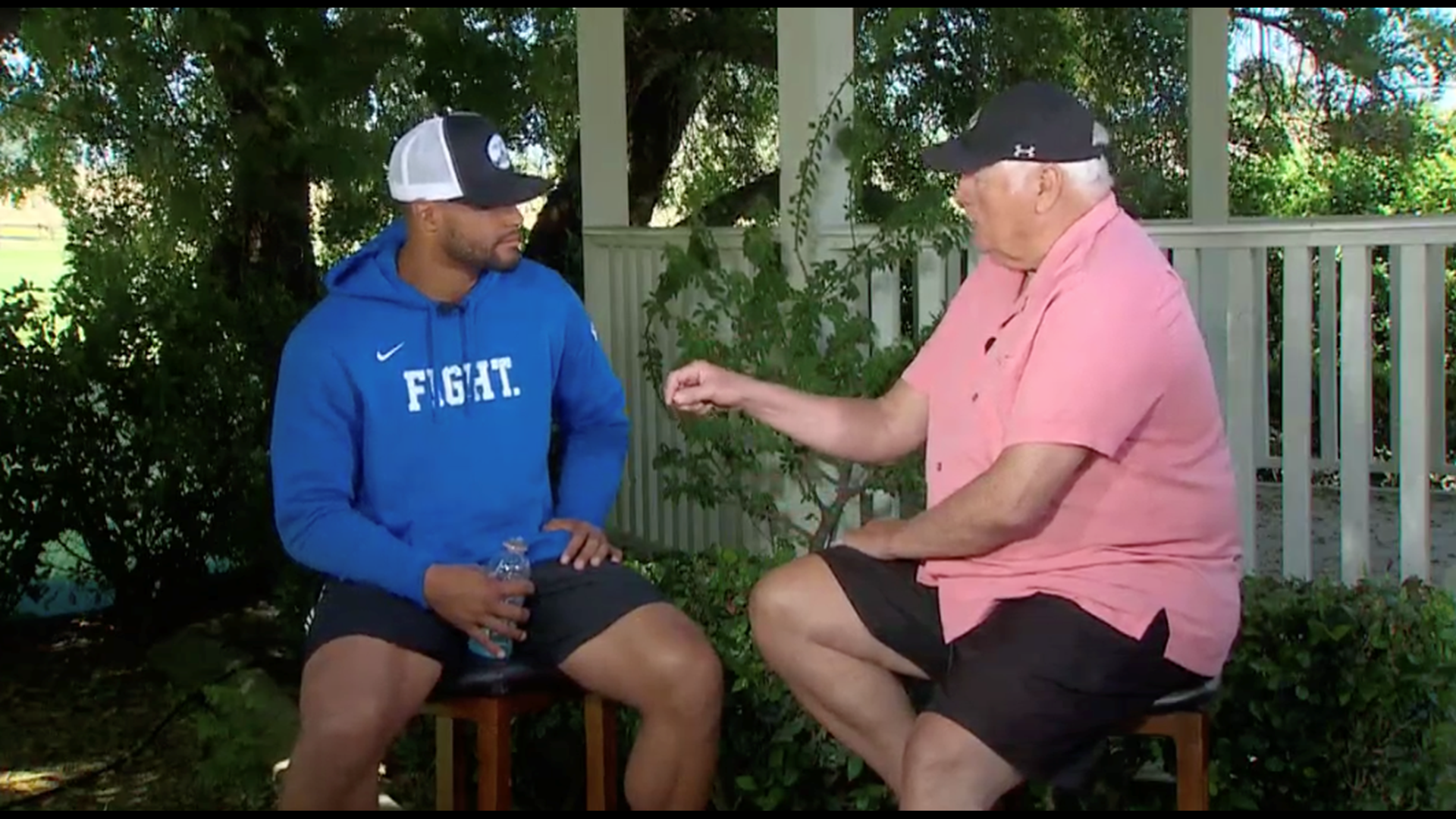 FRISCO, Texas — Tight end Jason Witten is entering his 16th season in the NFL and the Dallas Cowboys, which gives him tremendous perspective when it comes to evaluating talent he's played with and played against.

The All-Pro and franchise leader in games played says the pressure never seems to grind on quarterback Dak Prescott, who enters his fourth season with the team.

"It’s been a true joy for me at this point in my career to have a young teammate come in at that position and to see him take each step, another challenge comes and he’s never fazed by those challenges," Witten told reporters Thursday at The Star. "Coach Garrett has a saying: 'Thrive in tough situations, rise to the occasion.' That’s what I think of Dak."

The Cowboys took Prescott in the fourth round of the 2016 NFL draft. He had impressive preseason outings against the Los Angeles Rams and Miami Dolphins in the first two exhibition contests. But it was still Tony Romo's team, at least until Seattle Seahawks defensive end Cliff Avril broke the Pro Bowl field general's back on a 1-yard sack.

Dallas wasn't just facing a third-and-8 at CenturyLink Field in their dress rehearsal for the regular season; they were facing a long campaign with their franchise quarterback missing significant time, much like the season prior when the Cowboys produced a 4-12 record.

Prescott stepped in. The bullets were still relatively rubber, but may as well have been live in this environment, with the undertaking before him. The former Mississippi State Bulldog zipped a 12-yard pass to receiver Cole Beasley to move the chains and the keep the drive alive.

"I’ll never forget that third-and-nine in Seattle after Tony went down and he throws the option route to Bease," Witten said. "In every moment since then I don’t remember any moment that I have not seen him respond. He’s got high expectations for himself and this team this year.’"

Prescott led the Cowboys to a 13-3 mark, a NFC East title, and home-field advantage throughout the playoffs. Since that span, Prescott has compiled a 32-16 record with two division titles and a playoff win. The Cowboys have not had a losing record since Prescott has been under center for all 16 games, earning two Pro Bowl selections in the process.

To Witten, the things that strike him about the Haughton, La., native aren't the velocity of his throws or strategy at the line of scrimmage. Rather, it is the quarterback's character as a person.

Said Witten: "As a leader, he’s the hardest-working guy on the team, comes early and stays late. He’s got personal relationships with everybody on the team. The line of scrimmage, communication, understanding what the defense is trying to do, what our plan is. Everything is just at a higher, higher level."

Prescott is in the final year of his rookie deal. With Los Angeles Rams quarterback Jared Goff earning four-year, $134 million contract extension with $110 million guaranteed, it sets the expectations for what Dallas is going to have to pay to keep Prescott locked up, an undertaking Cowboys owner Jerry Jones declared even while the club plummeted to a 3-5 record midway through 2018 with no optimism on the horizon.

Players in the last year of their deals can say they are all about football, but Witten claims he sees it from Prescott.

"Amidst all the contract stuff, the guy comes to work ready," said Witten. "He’s ready every single day. He is the leader of this football team. Ask any guy in the locker room, they’ll run through a wall for him."

The Cowboys will have a chance to run through the New York Giants for Prescott Sept. 8 at AT&T Stadium as Dallas seeks their 10th Opening Day win over their NFC East rivals.

Do you think Jason Witten still has something left in the tank to help the Cowboys at tight end? Share your thoughts with Mark on Twitter @therealmarklane.