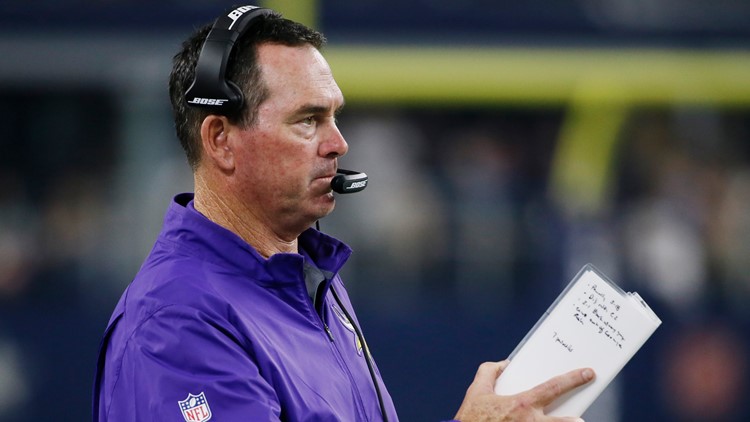 Credit Vikings' Zimmer as one of Jason Garrett's coaching influences

DALLAS — Minnesota Vikings coach Mike Zimmer was a staple on the Dallas Cowboys coaching staff from 1994 to 2006, and surely had an influence on current Cowboys coach Jason Garrett's career.

From 1994 to 1999, Zimmer was the defensive backs coach, part of Dallas' Super Bowl-winning team in 1995. Garrett was a backup with the Cowboys from 1993 to 1999 and spent those six seasons together picking the brain of the secondary coach.

"Zim and I used to talk all the time," Garrett told reporters Wednesday. "He came in here and had such a positive impact on our team. I think everybody who was around him knew right away he was a hell of a coach."

While Zimmer had the benefit of having a future Hall of Famer cornerback in Deion Sanders for five seasons as a position coach, Zimmer also furthered the development of safety Darren Woodson, who produced five Pro Bowls and three first-team All Pro selections, and helped cornerback Larry Brown become a Super Bowl MVP.

"He helped those guys individually," Garrett said. "He helped the whole back end and had a really positive impact on our defense and our team."

Garrett didn't see much time as the backup quarterback behind three-time Super Bowl winner Troy Aikman — just nine starts in his time with the Cowboys. However, to ensure that he still had a spot on the roster, Garrett would pick Zimmer's brain to determine the best ways to attack defenses.

"For me as a player, he was always so generous," Garrett said. "I was always so curious about why they’re doing things and we would spend a lot of time. I’d ask him questions about coverage philosophies and what works well against you and does this bother you, if you did this would that be something that gave you guys some problems. He was always so generous and so gracious with me, really educating me as we went."

After 1999, Garrett went to the New York Giants as their backup quarterback until 2003, after which he went to 2004 training camp with the Tampa Bay Buccaneers but ended up on the Miami Dolphins' 53-man roster.

After his playing career was over, new Dolphins coach Nick Saban hired Garrett as his quarterbacks coach, a post he kept for two seasons until the Cowboys brought Garrett back as their new offensive coordinator in 2007 before they even hired outgoing coach Bill Parcells' replacement. One of those candidates was Zimmer, who had served as the club's defensive coordinator from 2000-06.

Even though Garrett and Zimmer haven't been on the same team since the calendar turned 2000, the two have stayed in touch.

For the first time since Zimmer left Dallas, he will lead his current team against the franchise where he earned his reputation as a brilliant defensive mind. On Dec. 1, 2016, the Vikings hosted the Cowboys at U.S. Bank Stadium on a Thursday night, but special teams coordinator Mike Priefer had to fill in for Zimmer, who had undergone emergency retina surgery the day before. Dallas prevailed 17-15 over Minnesota.

Minnesota is 6-3 in NFC North and coming off of a 26-23 loss at the Kansas City Chiefs. The Cowboys remain in first place in the NFC East with a 5-3 record and seek to expand their two-game winning streak to stay atop the 5-4 Philadelphia Eagles, who are on a bye week.

Do you think Garrett and the Cowboys will be able to overcome Zimmer and the Vikings to remain atop the NFC East? Share your thoughts on the coaching in Dallas with Mark on Twitter @therealmarklane.