Cowboys TE Jason Witten has blinders to those doubting comeback 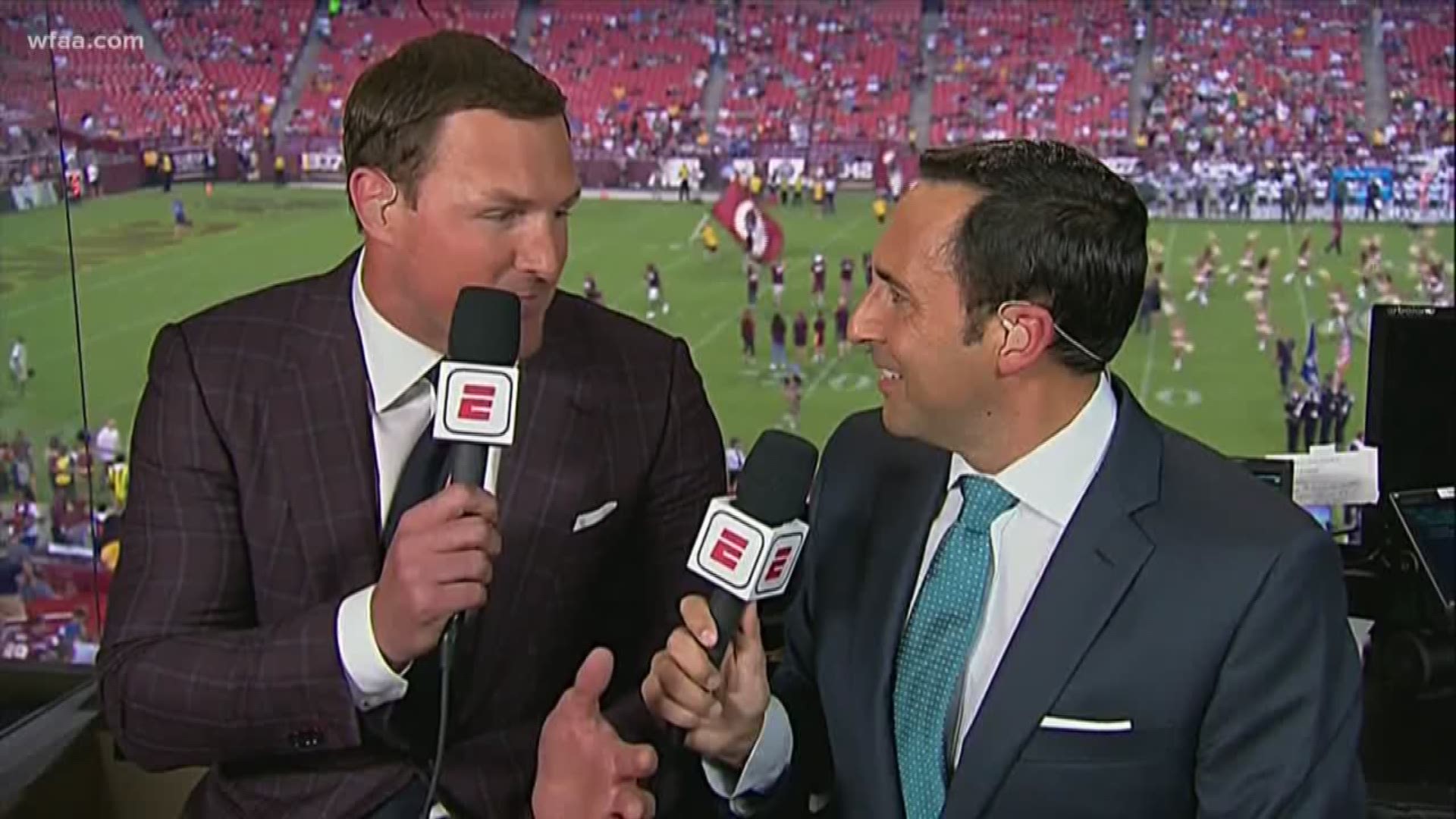 WACO, Texas — Tight end Jason Witten is making a comeback with the Dallas Cowboys after a season spent in the booth on ESPN Monday Night Football.

With the endeavor to help a young team crack into the NFL's final four while turning 37 years old on May 6, there are doubts as to how Witten can help the team having been away from the game for a full season. However, the All-Pro tight end has no doubts about his ability to contribute.

"I don't," said Witten at his induction into the Texas Sports Hall of Fame Saturday. "I understand that people are going to. I understand that and hopefully over time they'll see it. That's the great thing about this game is that it always shows. I'll be ready, and I think I know what the expectations are for me. A lot of that stuff will play out on its own."

Witten left the Cowboys last April with 1,152 catches and 12,448 yards and 68 touchdowns in 239 career games. He also left the Cowboys in a pickle as he announced his retirement from the NFL on day two of the 2018 NFL draft, forcing Dallas to scramble to fill the vacancy.

After a season of ups and downs at the position, Blake Jarwin emerged at the end with a three-touchdown catch performance in the Week 17 finale at the New York Giants.

The former Walter Payton Man of the Year insists he isn't making a decision that will jeopardize his old/new teammates.

Said Witten: "I wouldn't make a decision like that if I didn't feel like I could go in there and help them, and certainly that's something I thought through a lot before I made that decision. Fortunately, the Jones family gave me an opportunity. Look, my expectations are not only to help the team in any way that I can, but that also has to do with playing tight end. That's my focus right now as I go back."

2019 will be Witten's 16th professional season, and he claims he feels "like a little kid" when he pulls into his parking spot at The Star and sees his locker room filled with his helmet, cleats, practice jersey, and gloves.

Unfortunately for Witten, he won't have the same locker as he had starting in 2016. When Witten retired, that locker went to All-Pro right guard Zack Martin.

"It is a new locker," said Witten. "Zack Martin took my locker. So, that's his locker now."

"I'm loving it," said Witten on his return. "I'm invigorated by that process of going back in there. I really feel like I've got a lot of energy. I'm excited. I think you just get back in there."

Witten made the announcement that he would return to the Cowboys on February 28. A month prior, on January 23, it was announced that he would join the Texas Sports Hall of Fame. Witten was enshrined on Saturday evening in Waco along with Greg Swindell, Andre Johnson, Tony Franklin, Loyd Phillips, Nancy Lieberman, and Maureen Connolly Brinker. Honored nonetheless, the induction isn't the end of the road for Witten as he prepares for another season.

"I think more than anything else you see your helmet, practice jersey, cleats, and gloves and you start going to work," Witten added. "You try to make the decision that you think are best in real time. That's what I tried to do a year ago. ESPN was first class to me. I had a good time when I worked with them. Really enjoyed the booth and come back with a different perspective. But the most simple way I can put it is, that fire was strong. I'm excited to be a part of it. We've got a good young team that's ready to compete, and I'm ready to help them out in any way that I can."

Do you think that Jason Witten will be able to come back and be a Pro Bowl caliber tight end for the Cowboys after a season away from football? Share your thoughts on Witten's return with Mark on Twitter @therealmarklane.