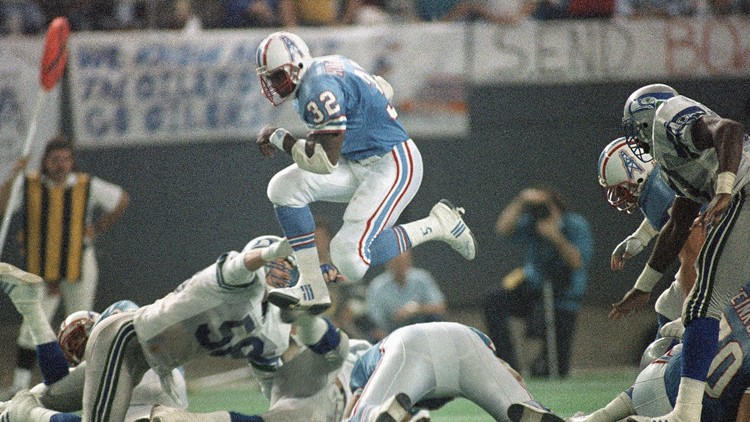 Photo by: AP
Houston Oilers fullback Alonzo Highsmith (32) goes jumping over fallen players in the third quarter of the NFL playoff game at Houston, Texas., Sunday, Jan. 3, 1988. Highsmith was hurt on the play after picking up six yards. (AP Photo/DGB)

DALLAS — The Dallas Cowboys are retooling their coaching staff under newly hired Mike McCarthy, but that doesn't mean they should keep the changes just to the sidelines. On Wednesday, Alonzo Highsmith was out as vice president of player personnel with the Cleveland Browns.

Highsmith has connections to the McCarthy era in Green Bay, as he was a senior personnel executive with the Packers from 2012-2017. The former Houston Oilers, Dallas Cowboys, and Tampa Bay Buccaneers running back left in 2018 to join Eliot Wolf in Cleveland to help fix the Browns.

The risk in bringing in Highsmith would be that there would be too many chefs in the kitchen. While Jerry Jones is the owner, president and general manager, the real decision-making since 2009 at the earliest has come from the likes of chief operating officer Stephen Jones. Vice president of player personnel Will McClay has done a masterful job adding talent to the Cowboys since he was an assistant director of said position in 2014. There doesn't seem to be a place for Highsmith in the war room.

However, it isn't uncommon for out-of-work personnel mavens, such as Highsmith, to land in old places or team up with familiar faces.

Enter Brain Gaine. When the Houston Texans fired their third ever GM in club history barely 17 months into his tenure on June 7, 2019, Gaine rejoined the Buffalo Bills as a senior personnel advisor during the advent of training camp. His old job of vice president of player personnel was taken by Dan Morgan, now the director of player personnel. Yet, Gaine worked well enough with general manager Brandon Beane that they were able to carve out a niche for Gaine in the Bills' front office.

Highsmith – the lead blocker for Emmitt Smith during his rookie season – would be helpful in bridging any divide between the Cowboys' personnel department and the new McCarthy way. There is already a key figure on the staff that McCarthy has worked with in Rob Davis, with Davis having been the director of player development in Green Bay from 2008-2017. Highsmith started out in the Packers' college scouting department under John Dorsey.

Though Hayward, Lacy, Daniels, Clinton-Dix, and Hyde left Green Bay, they earned second contracts elsewhere, which plays a part in another inconspicuous Cowboys philosophy of drafting players good enough to earn contract extensions in other NFL cities. That way, Dallas can get compensatory picks to help replenish the younger talent.

What would be a stumbling block in adding Highsmith to the Cowboys' front office could be Dorsey himself. Highsmith had a stronger loyalty towards Dorsey than he did the Packers and McCarthy, as Highsmith reunited with Dorsey in Cleveland in 2018. So far, there doesn't appear to be any interest in Dorsey across the NFL. The Washington job is open, and there is always the chance a club could pull a Jets or Texans like move and fire their GM during organized team activities in May or June.

The Cowboys and McCarthy will have enough to process as they meld their philosophies to bring a Lombardi Trophy back to Dallas. If Highsmith can be part of the glue, the Cowboys need to consider adding him.

Do you think the Cowboys could use more voices in the front office to help make better decisions? Share your thoughts with Mark on Twitter @therealmarklane.