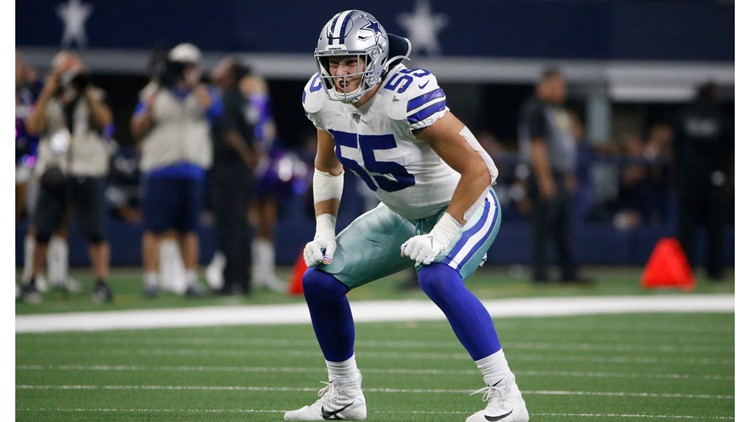 Photo by: AP
Dallas Cowboys' Leighton Vander Esch (55) lines up against the Philadelphia Eagles in the first half of an NFL football game in Arlington, Texas, Sunday, Oct. 20, 2019. (AP Photo/Ron Jenkins)

ARLINGTON, Texas (AP) — Dallas Cowboys linebacker Leighton Vander Esch is active against Minnesota on Sunday night after the second-year player missed the first game of his career with a neck injury.

Vander Esch was injured in a win over Philadelphia on Oct. 20 and sat out against the New York Giants on Monday coming off the team's open week. He is second on the team in tackles to fellow linebacker Jaylon Smith, according to the team stats.

Receiver Amari Cooper is active after being limited in practice all week by a knee injury. Cooper injured the knee in practice before facing the Giants and aggravated the injury early in the game. The club's leading receiver returned later in the game and scored a 45-yard touchdown.

Minnesota cornerback Trae Waynes is inactive for the first time this season because of an ankle injury. Mike Hughes is making his second start of the season in his place.

Receiver Adam Thielen had already been ruled out with a hamstring injury that led to the first absence of his six-year career. He was hurt Oct. 20 at Detroit and held out the next week against Washington. Thielen returned last Sunday at Kansas City before aggravating the injury in the first quarter.

The Vikings had also declared nose tackle Linval Joseph out with a knee injury.