Could Cowboys take a running back during Rounds 1-3 of NFL Draft?

The Cowboys have fewer draft resources than usual, and the league's leading rusher, but they could still be in the market for a backup for Ezekiel Elliott 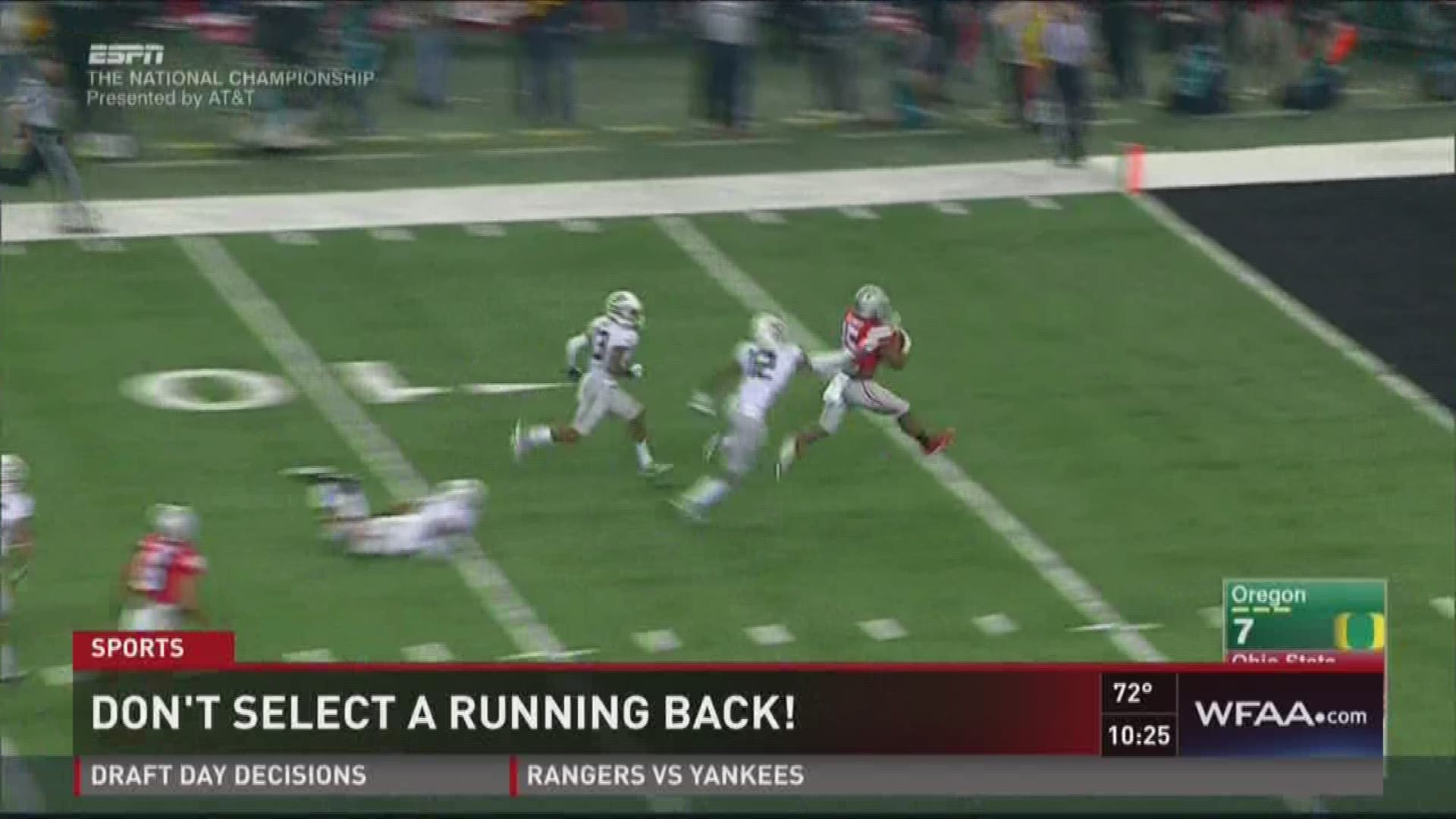 DALLAS — Running back is not often thought of as a position where the Dallas Cowboys would use premium draft resources. After all, the club has two-time NFL rushing champion Ezekiel Elliott carrying the rock. What more could they possibly want?

However, comments from Cowboys chief operating officer Stephen Jones on "G-Bag Nation" Tuesday on 105.3 "The Fan" [KRLD-FM] indicate that the club may look to add a credible backup to Elliott in the 2019 NFL draft.

"I just think any time you look at your situation and you see how much we rely on Zeke in terms of the number of touches that he gets game in and game out and what that would do to your team if you didn't have Zeke," Jones said. "I think we look back on last year and wonder if maybe we were hanging out more than we should have."

In 2018, the Cowboys had running backs Rod Smith and Darius Jackson spell Elliott. The duo amassed a total of 59 touches, 203 scrimmage yards, and a solitary touchdown.

Meanwhile, Elliott shouldered the burden with 2,001 scrimmage yards and nine total touchdowns on 381 touches. It wasn't exactly the Todd Gurley-C.J. Anderson combination that the Los Angeles Rams enjoyed during the final stretch run and throughout the playoffs.

What Dallas would seek in a young backup to Elliott is one that could provide the same type of run support that the veterans playing behind Elliott gave the Cowboys offense in years past.

RELATED: Three positions Cowboys could consider with their first pick in NFL Draft

Said Jones: "In the past with Zeke we've had guys like a [Darren] McFadden and an Alfred Morris that can come in there and really give you some good, solid carries. In hindsight looking at that with Rod [Smith] and wonder if we had as high a caliber guy as we should have. So, certainly that is a position that we'll look at and continue to look at as we move forward here."

In 2016, by himself, Morris totaled 72 touches for 254 scrimmage yards and two touchdowns. McFadden, who spent most of the 2016 season recovering from an elbow fracture, added 104 scrimmage yards on 27 touches.

The Cowboys spent a fourth overall pick on Elliott in 2016. That type of capital is not generally reserved for talent clubs expect to have just one contract's worth of production.

By finding a backup that can help Elliott out with carrying the rock or catching passes out of the backfield, it will help Dallas keep their prize pick from three years ago fresh heading into his second contract, which could be up as late as 2021 if the Cowboys exercise their fifth-year option with Elliott.

The Dallas front office believes strongly in too many touches being detrimental to the longevity of a running back. In 2014, DeMarco Murray won the NFL rushing title with 1,845 rushing yards and ran for 13 touchdowns. The problem was he carried the ball 392 times, well beyond a threshold that caused the Cowboys to evaluate how effective he could be after sustaining that many carries.

Since 1950, 7/10 running backs who carried 390-plus times in a season had dramatic drops in production over the next two years that were nowhere near their career-season levels of production. And at age 27, Dallas just decided to let Murray test free agency and see what committee they could assemble to hold down the fort at the position.

The Cowboys don't want to go back to a committee approach. Rather, they would like to have a sidekick to help out Elliott. With the organization feeling as if they have filled their roster needs in free agency, and in sticking with their best player available philosophy, Cowboys fans shouldn't be surprised if the club takes a running back within the first three rounds.

Do you think that the Cowboys should use some of their early NFL Draft capital on a running back? Share your thoughts on getting Zeke a backup with Mark on Twitter @therealmarklane.