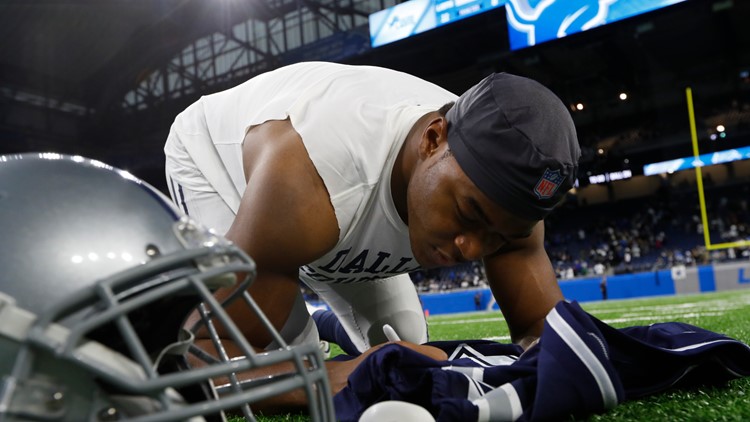 DALLAS — The Dallas Cowboys have some big-name free agents that they have to make decisions on this offseason. Signing quarterback Dak Prescott should be the top priority item on their ledger and will likely be the first domino to fall. Whether it be the franchise tag or through a long-term deal, Prescott will be staying with the Cowboys more likely than not.

Besides Prescott, Dallas has three other big-name free agents to try and sign, including wide receiver Amari Cooper. The assumption is the Cowboys will either re-sign or use one of their tags to keep their leading receiver in the fold.

All scenarios are being explored, but what happens if the Cowboys don’t re-up or use a tag on Cooper, choosing instead to spend their money on Prescott, defensive end Robert Quinn and cornerback Byron Jones? What would be the plan for the offense without Cooper for the Cowboys?

This might seem like a longshot, but the Cowboys need to be prepared if it happens. We haven’t heard much about the team not having Cooper return, yet it could happen. Cooper’s injury concerns, uneven play and the quality of wide receivers in the upcoming draft could cause a shift in the team’s philosophy and might lead to serious consideration in letting the receiver hit the open market.

RELATED: Cowboys receiver Michael Gallup's monster game Sunday was for an audience of one: His brother

The 2020 NFL Draft is considered one of the deepest in years at wide receiver. Many draftniks believe at least five, and possibly as many as seven, wide receivers will be taken in the first round. There is also an intriguing amount of depth and talent that can be had at the position come April.

If the Cowboys decide to move on from Cooper, or choose not to tag him and another team signs him away, the team would have a plethora of good options to replace him through the draft.

That’s the only reason to not make an effort to bring Cooper back because without him, the Cowboys don’t have enough quality at wide receiver. Remember what the offense looked like without Cooper in 2018? The organization certainly wouldn’t want to go down a similar road in Mike McCarthy’s first season.

Without Cooper, Dallas only has one legit receiving threat returning, Michael Gallup. It was an impressive sophomore year for Gallup, but assuming he’s ready to be a number one option is a risky proposition even if he was greatly improved.

Veteran wideout Randall Cobb could be brought back after a solid year, and his familiarity with McCarthy makes that option a decent probability, but Cobb will be a free agent come March. Cobb would be a big help to the wide receiver group. However, he is best suited as a third option and isn’t a top-end receiver the Cowboys will need if Cooper isn’t around.

The only other wide receivers on the roster who have any legitimate NFL experience are Devin Smith, Noah Brown, and Ventell Bryant. Smith showed promise in the pre-season and early in the year in 2019, but didn’t play much after September; while Brown hasn’t shown much potential as a receiver in his two seasons with the Cowboys.

The Dallas Cowboys will have their options if they move on from Amari Cooper, but the smart move would be to make sure he stays. After all, Dallas did give up a first-round selection for him less than 16 months ago.

By all accounts, the team wants to keep Cooper because they know the prospects of playing without him are grim.

Do you think the Cowboys should tag Amari Cooper to make sure he’s back in 2020 or should they part ways and rebuild at wide receiver? Share your thoughts with Ben on Twitter @BenGrimaldi

RELATED: Memory Lane: How Amari Cooper and the Cowboys turned the 2018 season around against Philly