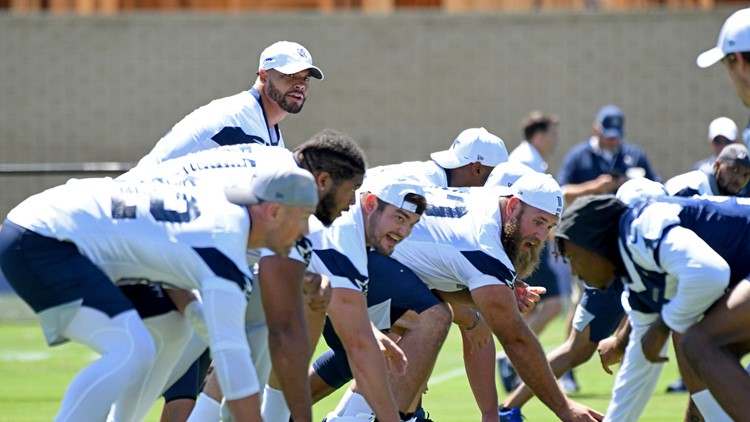 DALLAS — With the 2010-2019 decade wrapped up and the 2020 NFL Draft approaching, we’re taking a look back at some of the biggest triumphs in the draft that sculpted Dallas during the era.

You won’t find Dak Prescott on this list, even though his selection changed the complexion of the team, because the Cowboys kind of stumbled into him. Nor will you see the likes of Ezekiel Elliott, Byron Jones, or DeMarcus Lawrence, which just goes to show how well Dallas drafted in the 2010s.

The Cowboys were coming off a third consecutive 8-8 season entering the 2014 NFL Draft and came away with their third offensive lineman first-round pick in a four-year stretch. The team put a focus on the offensive line starting in 2011 in hopes of prolonging the career of their franchise quarterback Tony Romo.

Romo had perhaps his best season in Zack Martin’s 2014 rookie campaign. But Romo stepped away from the game following the 2016 season. His retirement wasn’t due to the offensive line – they were considered to be one of the best units in football. Injuries ultimately got the best of Romo, but the Cowboys still enjoyed the spoils of an elite offensive line.

Martin is arguably the Cowboy's best selection during the decade. Across the NFL you will hear praise for Martin as one of the very best interior linemen in the sport. In college, Martin played every spot on the line for the Notre Dame Fighting Irish, Dallas slotted him in at guard and he has produced every year.

The Cowboys are lucky to have Martin as owner Jerry Jones had his eyes on Heisman winning QB Johnny Manziel with the pick. Jones had to be talked out of it, while claiming he never would have bought the Dallas Cowboys if he knew he would be making a safe decision like that.

Martin has been anything but “safe” to the defensive lines in the league.

During the NFL Draft process in 2013, there was a bit of initial backlash when the Cowboys traded back to the 31st spot and then chose Travis Frederick, a center from Wisconsin. Many felt that he was a second or third round selection, and the Cowboys had reached. Even Frederick himself was surprised according to Calvin Watkins.

"A little surprised," Frederick said. "I thought that I was going to probably fit somewhere in the second round, but Dallas had showed a lot of interest in me throughout the process. I knew that they definitely needed a little bit of help inside and were looking to upgrade that. I think that I'm going to fit in pretty well down there."

While being named to multiple All-Pro teams, Frederick has more than proved his worth since his controversial selection.

The Cowboys found just how valuable he was when he sat out the entire 2018 season while he fought a battle with Guillain-Barré syndrome. The team surrendered 56 sacks in the year without Travis; upon his return in 2019, that number dropped to 23. That number was the lowest number of sacks in Prescott’s four-year career.

When the Dallas Cowboys made Dez Bryant their very first selection of the decade, they were coming off a first place finish in the NFC East and their first playoff win since 1996.

The Cowboys top receivers in 2009 were Miles Austin, Patrick Crayton and Kevin Ogletree. They were in need of a playmaker on the outside. So when Oklahoma State standout Bryant slid down in the draft, Dallas jumped up to the 24th pick to grab him.

The master of the “X” became one of the most entertaining and must see players of the early part of the decade. He quickly built a rapport with Romo and the two put on a show. From 2011-2014, Bryant amassed 4,863 yards and 50 touchdowns. No one scored more receiving touchdowns than Bryant during that stretch. Jimmy Graham was second with 46 TDs.

After a disappointing 2010 season, Tyron Smith of USC became the highest first-round selection by the Cowboys since they took Terence Newman with the fifth overall pick in the 2003 NFL Draft.

Smith was the first of three first-round selections on the offensive line over the decade as the Cowboys began their project to protect quarterback Tony Romo. Smith spent his first season at right tackle before swapping with Doug Free to become the starting left tackle. From then on, Smith became Romo and Prescott’s blindside bully, and one of the best offensive linemen in team history.

Smith was just 20 years old when he came to Dallas, the Los Angeles native has played and started 131 games in his eight-year career. He has been named to seven Pro Bowls, two first-team All-Pro selections and two second-team All Pro selections.

Sean Lee was the second pick by Dallas in the 2010 NFL Draft that yielded Dez Bryant and Lee on back-to-back selections. Not a bad way to start a decade. With those two kicking off the 2010s, it was probably the best one-two punch in a draft over the decade. Those picks were rivaled by the likes of Zack Martin and DeMarcus Lawrence in 2014 and Ezekiel Elliott and Jaylon Smith in 2016.

Nevertheless, while injuries became a part of Lee’s story, excellent football was his mark when he was healthy enough to be on the field. Lee was named to the All-Pro team in 2016, the first year that he was able to play the entire season.

Lee has had four seasons with 100 or more tackles, with a career high of 145 in 2016. Lee has also been selected to the Pro Bowl twice in his career and he is currently fourth in team history for most interceptions by a linebacker behind greats Lee Roy Jordan, Chuck Howley and Jerry Tubbs.