Injuries, turnovers and questionable play-calling continue to plague the 2020 Cowboys.

ARLINGTON, Texas — The turkey is dry. The potatoes are undercooked. And the dog ate the green bean casserole.

As far as metaphors go, that's the best I got when it comes to the Dallas Cowboys performance on Thanksgiving Day.

It was a series of disappointments against the Washington Football Team and I honestly don't know where to begin, so let's take it from the top.

The Cowboys' first possession of the game was lowlighted by two injuries to the offensive line.

Zack Martin -- starting at right tackle instead of right guard for the second straight week -- went down with a calf injury. He had to be helped off the field and did not return to the game. 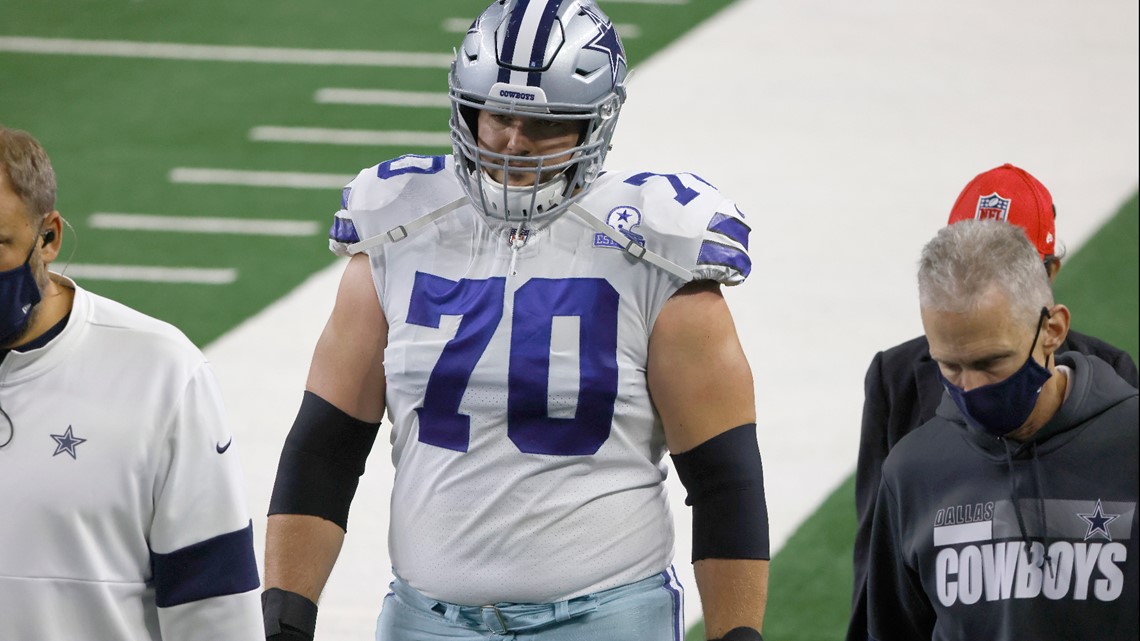 Martin's absence was another devastating blow to an offensive line that finally found some success and stability last week against the Minnesota Vikings.

Martin was not the only starter to leave the game, however.

So, the Cowboys were forced to play third stringer Brandon Knight at left tackle vs. Washington defensive end and rookie sensation Chase Young.

Yeah... 'Twas not the greatest night for the Cowboys offense.

Dalton was sacked three times and threw an interception in the fourth quarter, although it was more of a "Bill Russell block" than an "interception."

Montez Sweat GOT UP 😳 @_sweat9 @WashingtonNFL

Cowboys running back Ezekiel Elliott -- who held out last summer for a 6-year, $90 million contract -- ran the ball 10 times for 32 yards and fumbled once. His fifth lost fumble of the season.

The lone bright spot on the Cowboys offense was receiver Amari Cooper -- 6 catches, 112 yards, 1 TD -- who continued to destroy Washington on Thanksgiving Day.

Cooper had eight catches for 180 yards and two touchdowns against Washington on Thanksgiving 2018.

Despite a comedy of errors, the Cowboys had a shot in the second half thanks to an admirable performance by the defense.

Linebacker Jaylon Smith picked off Washington quarterback Alex Smith and should have returned it for a game-tying touchdown, but receiver Terry McLaurin made a touchdown-saving tackle and Dallas settled for a field goal.

The Cowboys were still in it in the fourth quarter until they inexplicably decided to run a fake punt deep in their own territory.

Like, what are you doing? WHAT. ARE. YOU. DOING?

"You won’t get anywhere if you’re thinking about negatives all the time," Cowboys head coach Mike McCarthy said after the game.

OK. It'd be easier if the Cowboys gave us more positive things to think about.

All these words and not one about the player of the game: Washington rookie running back Antonio Gibson.

He was fantastic. He's been fantastic. And Dallas will have to reckon with him twice a year for many years to come. (And Washington isn't paying him $90 million.)

Gibson finished with 20 carries for 115 yards and three touchdowns. He also caught five passes for 21 yards.

Washington is now atop the NFC East with a 4-7 record, while the Cowboys drop to 3-8.

And at this point, with this current Cowboys team, what good would winning the division do?

"Congrats on making the playoffs! As a reward, here's a first-round loss AND a worse draft pick."