Texas Longhorns band will not attend Baylor game, play 'The Eyes of Texas' due to lack of 'necessary instrumentation'

The Longhorn Band will not attend the UT-BU game after a survey asking if band members would play the song revealed a lack of “necessary instrumentation.” 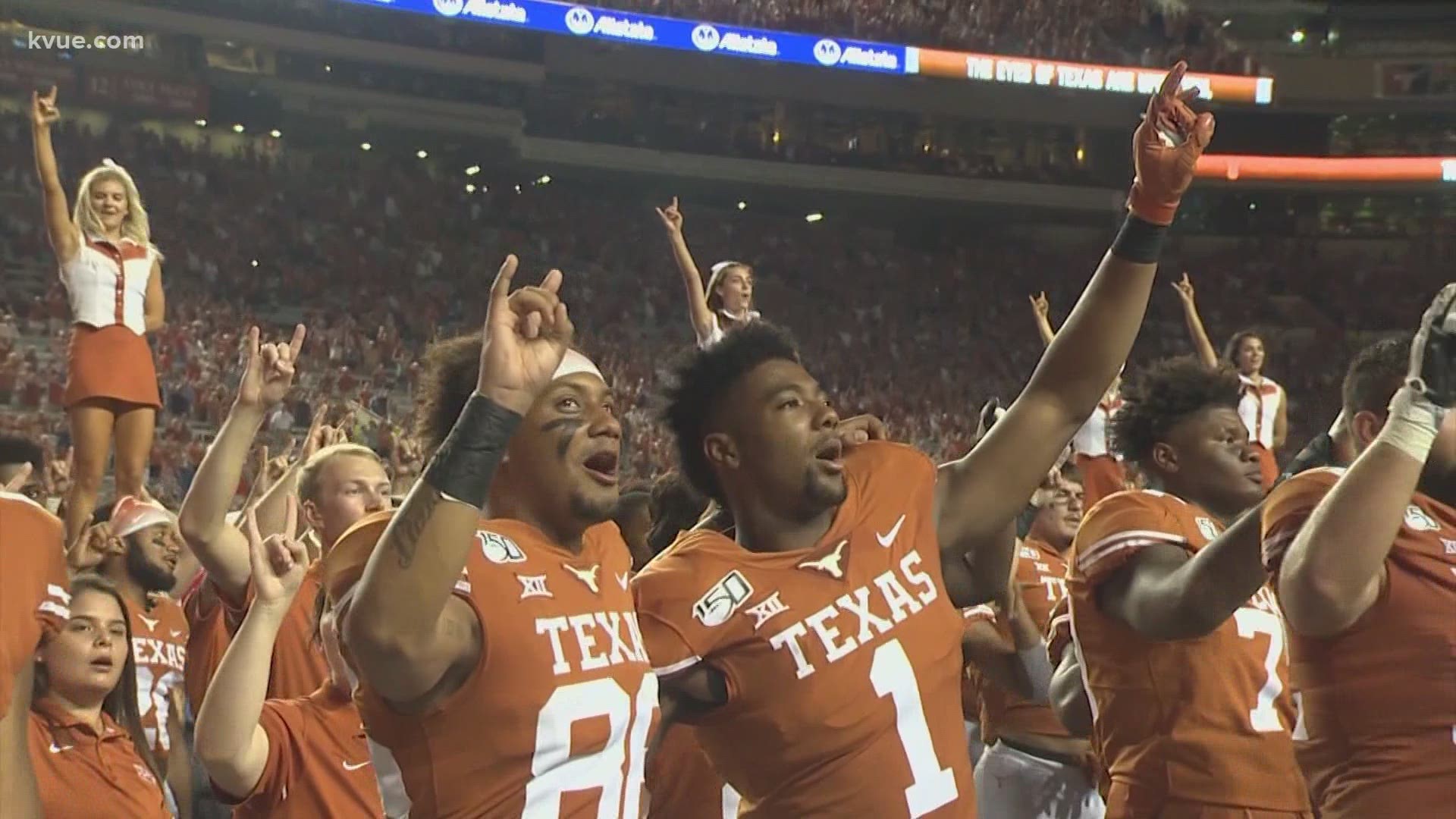 AUSTIN, Texas — According to a message to band members obtained by the University of Texas student publication "The Daily Texan," the Longhorn Band will reportedly not attend the football game versus Baylor.

The message sent to band members reportedly stated that after an internal survey was given asking whether members would play “The Eyes of Texas,” it was revealed that there was a lack of “necessary instrumentation.”

“Based on (survey responses), we do not have the necessary instrumentation, so we will not participate in Saturday’s game,” Longhorn Band Director Scott Hanna said in the message, according to the report.

KVUE reached out to UT for comment and was told the following:

"We are continuing to work with students in the Longhorn Band to maintain the musical traditions of The University of Texas, including 'The Eyes of Texas.'”

As Doug Dempster, dean of the College of Fine Arts, said on Oct. 6, "A range of well-informed convictions on this issue need to be considered respectfully as conscientious and honorable. But given the long-standing traditions and mission of a university spirit band, this disagreement needs to be resolved before the Longhorn Band can return to public performance."

A look at Dempster's full statement is found on the university's "key issues" page.

On Wednesday night, UT President Jay Hartzell released the following statement, saying the song will be played at the game regardless:

"The Eyes of Texas will be played this weekend as it has been throughout this season – and it will continue to be played at future games and events. While we would love the band to be with our fans at all our games, we never planned for them to perform live this Saturday. We knew this summer that, as we make our campus a more welcoming place, we would face many hard conversations. I remain truly optimistic that we will find ways to join together around our song, which has been so positive for so many Longhorns over the past 120 years."

This news comes as the controversy surrounding the university's alma mater has circulated headlines since the ending of the Red River Showdown.

Texas head coach Tom Herman opened up his weekly Monday press conference following the loss to Oklahoma about "The Eyes of Texas," where he told the media he encouraged the team to take part in the post-game tradition, but added anyone who did not feel comfortable doing so did not have to participate. In his opening statement, Herman eluded to a handful of members of the Texas coaching staff and a few others – notably Sam Ehlinger – singing "The Eyes of Texas" after the OU game, while others elected to go straight to the locker room.

Nearly one week later on Oct. 20, Sam Ehlinger was asked about "The Eyes of Texas," as well. Ehlinger called the situation "a little bit of a misunderstanding."

"I know it's been blown up all over the place, but I stayed on the field longer than my teammates [because] I was talking to coaches and players [from Oklahoma] ... It just took a really long time and there were a lot of things going on," Ehlinger said. "I know that there were a few other guys out there on the field. I know when I turned around to walk back to the locker room, Ta'Quon Graham was there waiting for me. I don't know if he sang the song or not, but he didn't leave. I wasn't the only one on the field. I think there was a bit of confusion there."

Sam Ehlinger calls this picture of him standing alone for The Eyes of Texas “a little bit of a misunderstanding.”

Says he stayed on the field much longer than normal talking to Oklahoma coaches and players, and added that Ta’Quon Graham was there waiting for him in the tunnel. pic.twitter.com/B61mhEQLSA

Ehlinger also explained that part of why he continues to sing the song is a devotion to his late father.

"I grew up a Longhorn," he said. "I grew up singing 'The Eyes of Texas' win, lose or draw ... I feel a connection with my family and with my dad singing that song."

Ehlinger's father passed away in 2013 competing in a triathlon in San Francisco.

According to The Daily Texan report, the message sent to band members said the survey results would not impact whether the band plays and performs at future games.

During Herman's press conference on Oct. 12, the UT football coach explained the university's approach to the alma mater, citing the plan laid out by Hartzell.

Back in July, Hartzell said the song would remain the school's alma mater but said the origin had "created a rift in how the song is understood and celebrated, and that must be fixed."

Reddick and the committee – made up of diverse alumni, staff members, faculty members and students, including current and former athletes and Longhorn band members – have until January 2021 to complete their work, so there may be a plan put in place to "own, acknowledge and teach about all aspects of the origins of 'The Eyes of Texas,'" as stated on the website dedicated to tracking UT's progress on its plan to promote diversity, inclusion and equity.

Read more about the university's process of renaming buildings and funding programs for underrepresented communities here.

WATCH: Sam Ehlinger explains what 'The Eyes of Texas' means to him

H-E-B employees across Texas getting a $500 bonus