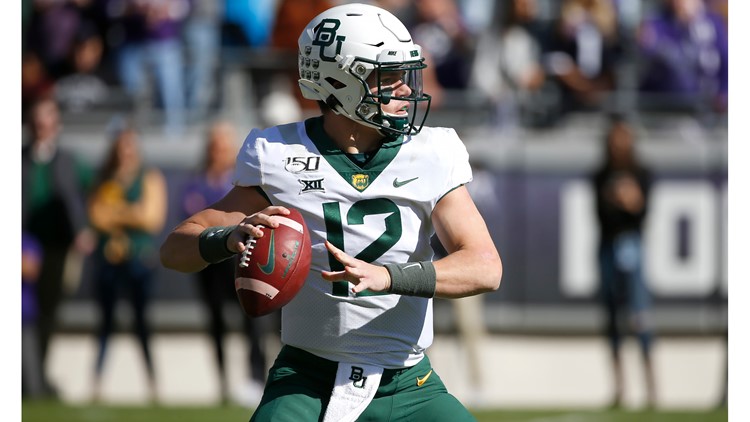 Photo by: AP
Baylor quarterback Charlie Brewer (12) looks to throw against TCU during the first half of an NCAA college football game, Saturday, Nov. 9, 2019, in Fort Worth, Texas. (AP Photo/Ron Jenkins)

No. 11 Baylor needed 3 OTs against TCU to stay undefeated

FORT WORTH, Texas (AP) — Denzel Mims made a leaping 4-yard touchdown catch in the third overtime for Baylor, capping another comeback win for the No. 11 Bears and keeping them undefeated with a 29-23 win over TCU on Saturday.

Charlie Brewer also threw a 20-yard TD pass to Mims on fourth down in the second overtime to extend the game. Brewer had a 3-yard TD run in the first overtime.

The Bears (9-0, 6-0 Big 12) finally had the win on Grayland Arnold's game-ending interception of Max Duggan's fourth-down pass in the end zone. That came six plays, and a facemask penalty that put the ball at the 1, after Duggan's scramble and spinning move along the sideline on what was initially ruled a 20-yard touchdown before replay review showed he stepped out at the 3.

Baylor forced overtime when John Mayers kicked a 51-yard field goal with 36 seconds left in regulation. The ball just cleared the crossbar to tie the game at 9-9.

This is the seventh time in two seasons that Baylor has won after a fourth-quarter comeback. This was the fourth this season — all in Big 12 games. The Bears have won 11 games in a row since losing to TCU last November.

All the scoring in regulation came on six field goals. The teams combined for five touchdowns in overtime.

TCU (4-5, 2-4) led 9-0 after Jonathan Song had field goals at the end of the first half. He kicked a 37-yarder with 29 seconds in the first half left before TCU squib kicked and the ball bounced off Baylor freshman linebacker Trystan Slinker. Derius Davis recovered at the Baylor 24, setting up Song's 31-yard kick on the last play.

Baylor: The offensive struggles continued for the Bears, the Big 12's last undefeated team. They managed only 294 total yards — 90 of those coming in the in overtime only 10 days after winning a game with fewer than 20 points for the first time in 13 years.

TCU: Duggan played with tip of his injured middle finger on his throwing (right) hand heavily taped up for protection. He was 14 of 32 passing for 140 yards with two interceptions — one of a floater and the other through the hands of a receiver. He also ran 14 times for 46 yards.

Baylor is home next Saturday for a huge Big 12 game against No. 9 Oklahoma, the four-time defending conference champion.

TCU is back on the road to play Saturday at Texas Tech.