SportsCenter shared the family's reaction to their Instagram page which now has more than half-a-million likes. 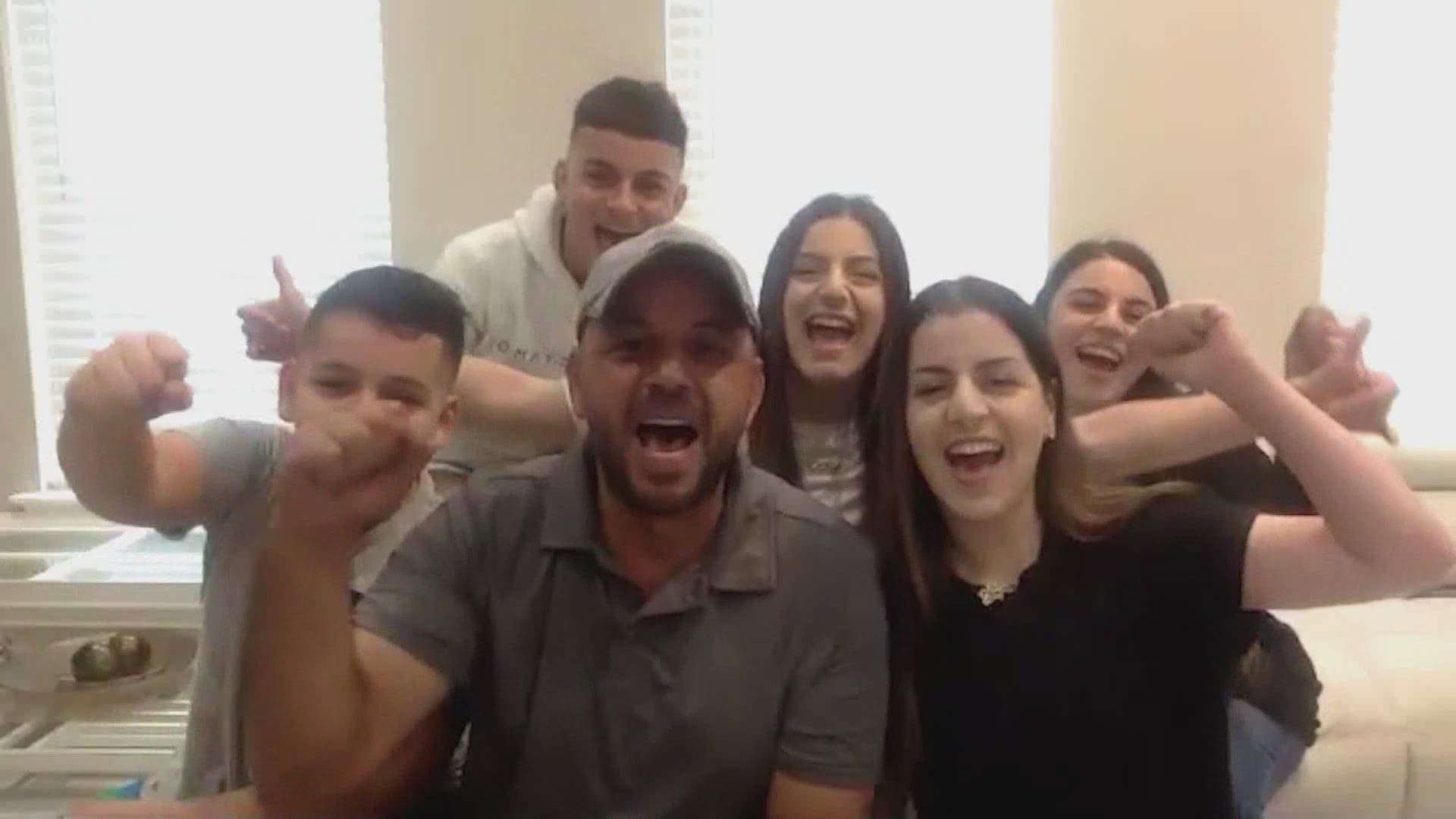 ARLINGTON, Texas — An Arlington family is getting some well-deserved laughs and praise for their hysterical reaction as they watched Dallas Mavericks star Luka Dončić nail a shot in overtime Sunday to even the team's playoff series against the Los Angeles Clippers 2-2.

The reaction, filmed by the Abdallah family in Arlington, was captured on video and shared on social media.

SportsCenter even posted the funny moment to its Instagram, where the video now has more than 500,000 likes.

In it, you see the Abdallah family losing their minds when Dončić scored in the final seconds.

The whole family erupts, hugging, screaming and shouting much like any Mavericks fan that was watching the game.

Then you see 11-year-old Ahmad Abdallah run out of his house and into his street with excitement.

His sister Hannan Abdallah can be heard laughing behind her cellphone as Ahmad rips his shirt off and flexes for the camera.

"Right when it went in, I didn't know what to do!" Hannan said laughing.

Hannan may not have been filming the final moments of the game if she hadn't documented Ahmad and her father Osama in a pretty bad mood earlier.

The pair were filmed in a very upset state as the Mavericks allowed the Clippers to come back and tie the game to go to overtime.

RELATED: Luka becomes a legend as Mavericks even series 2-2 with Clippers

That video was posted to Hannan's Instagram story, so she had to get the final result when it eventually arrived.

"I saw them stressed out in the beginning because the Mavericks weren't doing very well," Hannan said. "They were arguing. All in good fun."

The playoffs can get personal for die-hard fans.

The patriarch of the family, Osama Abdallah, is originally from Amman, Jordan. He came to the United States in 1991 where he met his wife and started a family.

Osama told WFAA that he's always loved basketball even when he was overseas, watching the Chicago Bulls as Michael Jordan took them to championships.

RELATED: Did Michael Jordan influence Jerry Jones to grow the wealth in the NFL?

One of his first jobs in America was in a grocery store, where he said that he would watch Mavericks and Cowboys games on a TV in the supermarket.

That's where his fandom was born.

"I felt like this was my hometown now, and it is!" Osama said.

Osama's love for sports was passed on to his children.

Ahmad is a huge Luka fan and never lost faith as the Mavericks entered overtime.

"I kept telling him to not give up because it's a playoff!" Osama said.

"No one can guard Luka," Ahmad replied. "Put anyone on him and you're not guarding him," he said with a laugh.

The outcome was just what every sports fan in Dallas had been missing for months.

With stay-at-home orders and a pandemic staring most of us in the face, Doncic's buzzer-beater was a fleeting moment of happiness that made us all forget we were in a pandemic.

"It was a natural reaction," Mona Abdallah said. "We have been looking forward to this season for months and time together as a family to watch games.

"Anyone who loves sports would appreciate what happened, it was unbelievable."

Indeed it was, and hopefully more Luka magic graces the team's tough series with the Clippers.