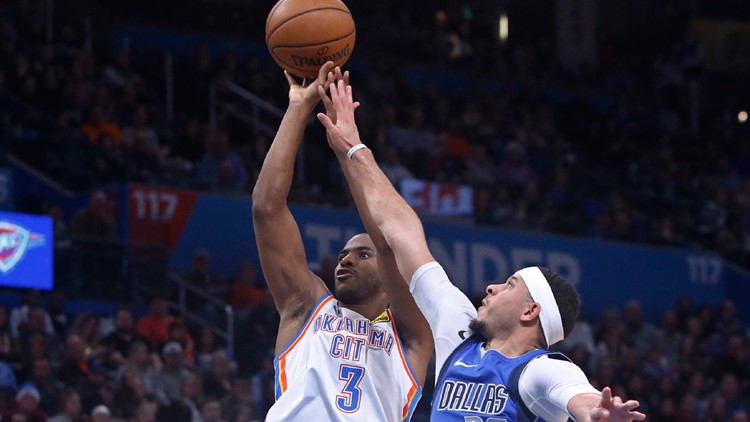 DALLAS — Luka Doncic and company head into Chesapeake Energy Arena in Oklahoma City to face a surging Thunder, winners of their last five games and owners of the longest active winning streak in the Western Conference.

The evening match-up is scheduled to start at 7:00 p.m. CT with the Mavericks looking to close out their road trip with a victory.

The match-up between rivals feels like an absolute afterthought in the wake of Sunday's tragedy.

Reports out of California late Sunday morning had the world in disbelief. Kobe Bryant and his daughter Gianna Bryant were among the passengers in a helicopter crash in Calabasas, where all aboard tragically died.

Sunday’s scheduled afternoon games saw a myriad of shock among fans and players alike. The Toronto Raptors first possession against San Antonio was an intentional shot clock violation, letting the first 24 seconds of the game expire with no more than a dribble attempted. Upon taking the ball, the Spurs followed suit as fans rose to pay tribute.

During the Houston Rockets’ match-up against the Denver Nuggets, former Maverick Tyson Chandler summed up the somber mood across the league:

It is impossible to contain how transcendent Kobe Bryant was and the legacy he leaves behind into a few paragraphs. There are plenty of Kobe tributes pouring in, some analytical, some nostalgic, but all heartfelt. For the Mavericks, no player will ever wear 24 again, the ultimate sign of respect for a competitor who shaped an entire generation of basketball fans across the world. Let’s hope that the rest of the league follows suit.

The Mavs didn’t trail for long against the Utah Jazz on Saturday. In fact, they didn’t trail for much longer than a minute for the whole game. We can debate whether that matters but a loss is a loss, and the Mavs took the loss, 112-107.

Rudy Gobert showed why he’s deserving of his first all star berth. The French big man scored 22 points on Dallas. Gobert added 17 rebounds and 5 blocks, one of which clinched the game for the Jazz.

While Dallas showed that they can keep up with one of the West’s elite teams, their ongoing free throw struggles continued the trend of being unable to close out a big-time opponent in a winnable game.

Mental note for MFFL’s: Rudy Gobert is a free agent in 2021 and would look pretty swell in Mavs blue.

The Friday trade of Isaiah Roby to Oklahoma City was finalized over the weekend, letting the complicated series of transactions needed to make Willie Trill a real-deal Mav to be completed.

In our Utah preview, I mentioned Carlisle has a proclivity to bury players at the end of the bench who are deemed to be lacking in effort, a tag that has been added to Cauley-Stein in his young career, warranted or not.

Cauley-Stein will more than likely make his debut when the Mavericks return home to face Phoenix on Tuesday, but a good showing in practice could lead to his Dallas debut Monday against the Thunder.

Dallas could have used his services against Gobert, who will likely win defensive player of the year for the third straight year. They could really use that presence against literal wild man Steven Adams. The Kiwi bruiser is exactly what Kristaps Porzingis needs to stay away from as he gets his confidence back.

Unleashing the Bobi on Adams might match his power, but Adams’ speed won’t allow Marjanovic to stay in the game for long. It is those kinds of issues that had the Mavericks looking for front court help even before Dwight Powell was lost for the season.

With their recent win streak, the Thunder are 28-19 and seventh in the crowded Western Conference. Two losses separate them from fifth place Dallas (28-17).

When the Thunder unloaded Paul George and Russell Westbrook in the offseason for a collection of assets that would make Sam Presti blush, it was assumed that Oklahoma City would go into tank mode. Reports of the Thunder’s demise have been greatly exaggerated.

With Chris Paul (17.2), Dennis Schroder (18.8), and rising star Shai Gilgeous-Alexander (19.7), three of the Thunder’s top four scorers are guards. The other is forward Danilo Gallinari (19.1 PPG, 41.4 3P%), who was acquired in the Paul George trade and has been rumored as a trade acquisition target for the Mavericks due to perfect roster fit and an expiring contract.

While the Thunder have been surprisingly more competitive than initially perceived, look for OKC to continue their rebuilding strategy and showcase Gallinari ahead of February’s fast approaching trade deadline. Gallinari would spell relief for the Mavs free throw shooting woes, he holds a career average of 87% from the line and is at 91% for the season.

Will the Mavericks finish off their Northwest division road trip with a win in OKC? Share your predictions with Irvin on Twitter @Twittirv.