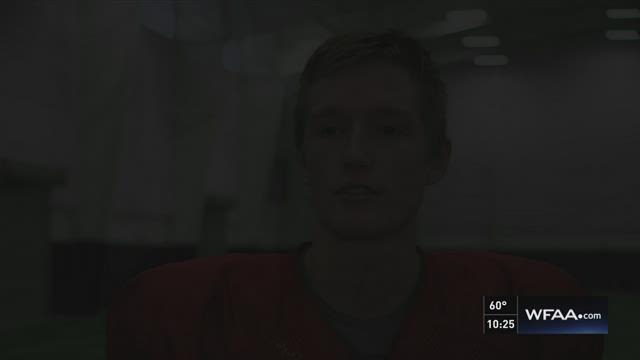 "If you were having a bad day, he'd always be making you laugh, cheering people up," said Muenster senior Clay Stevens. "He was that type of guy."

But on Saturday, May 20, they lost the high school junior.

"I got the call that morning," said senior Max Herr. "I saw the Care Flight go overhead. The car was rolled over on the ground, and there was debris everywhere on the ground."

Hours after a car crash, York succumbed to his injuries. An organ donor, York's death saved others' lives. But it's his final words to his friends that they remember most.

"You don't find it very common for a couple of high school guys to say 'I love you' to each other, but that was one of of the most important things to all of us... was the last time he said I love you to all of us," Herr said.

When York passed, his baseball team was in the midst of a run to a state title.

"Every day at practice, he would get done with basketball and then drive by the baseball field and honk or something and wave," senior Carson Trubenbach said. "So it was weird knowing he wouldn't be doing that anymore. You could just feel that he was gone."

The baseball program went on to win a state title, just a few months after Cal and his teammates won a title on the basketball court. And on Thursday, the football team plays for a title, as well.

Cal didn't play on the football team. But frankly, that doesn't matter. He was so close with so many members of this football program, that they've dedicated this season to him."

"He had such an impact on everybody, that we needed to put the 3 on our helmet to represent him," Herr said.

"I don't think it's any coincidence that we haven't lost a game in any sport since he's passed. You know, it would be unreal, and it would be a dream come true for all of us. And I know he'll be out there helping us get it done."

Now all that's left to do -- go win that third state title for their fallen #3.