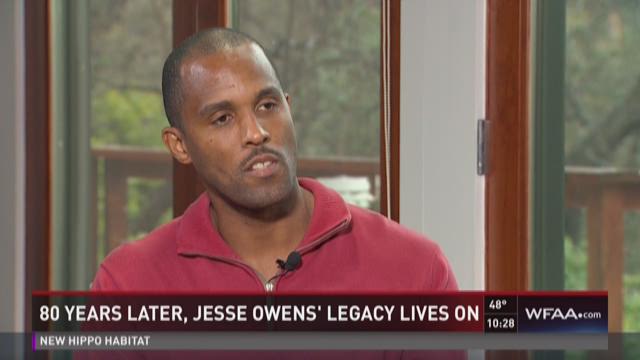 DALLAS -- Flipping through family pictures with Dallas resident Chris Owens is like taking an inside look at some of the richest sports history there is.

“This is an autographed picture he gave to my grandmother, his baby sister,” Owens said, holding up a vintage photo of legendary track star Jesse Owens.

An autographed photo of Jesse Owens.

The younger Owens attended the film’s premiere a week ago in Columbus, Ohio, applauding it for capturing his great uncle’s essence -- especially one of the Buckeye Bullet’s best traits.

“My dad would say that he had an ability to focus,” Chris Owens said, “and that's depicted in the movie; him having the ability to block everything out and focus.”

Jesse Owens introduced the game of basketball to Chris’ father, Haywood. The love of the game was passed down to Chris.

He played at the University of Texas, and then internationally, including a stop with the top club team in Berlin. It gave Chris a first-hand look at the impact of what his great uncle accomplished on the Olympic stage.

“The impact he left still to this day in Berlin -- I never would have dreamed,” Chris Owens said. “You know, he has a street named after him. His name is etched into the Olympic Stadium.”

Chris says while the film may not have covered some of the frustrations Owens felt regarding race relations upon his return to America, it paints a picture of what he calls the "most difficult road game for an athlete ever."

“He was scared for his life; not knowing what [he was] getting into,” Owens said, recounting how Jesse Owens told family members he feared the Nazis would try to kill him. “There no other athlete that's done it in history.”

A history that is being celebrated again.