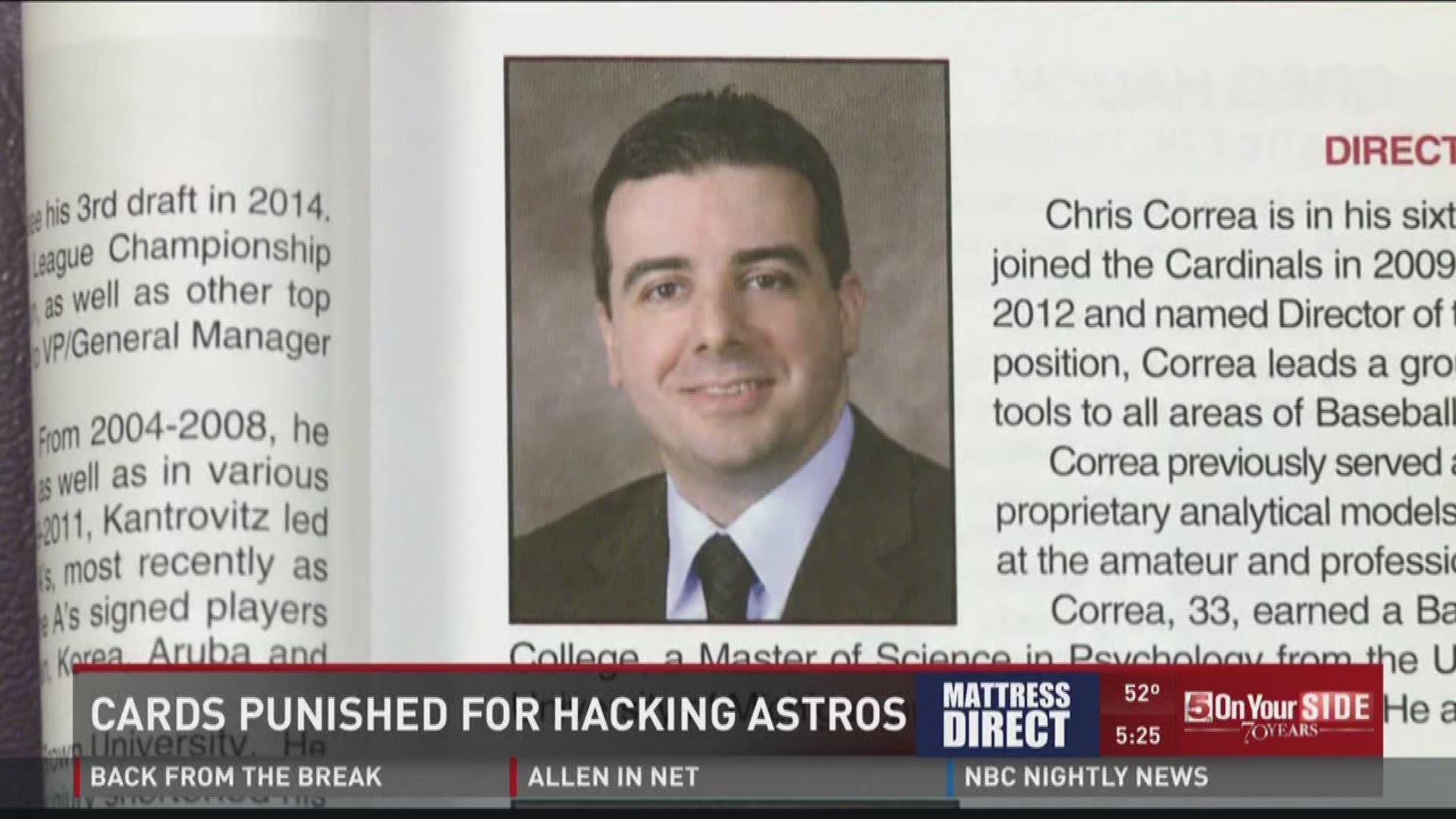 Major League Baseball dropped an unprecedented penalty on the St. Louis Cardinals for their former scouting director’s hacking of the Houston Astros’ computer system, ordering the Cardinals to send their top two draft picks to the Astros and pay them $2 million in damages, while placing perpetrator Chris Correa on the permanently ineligible list.

Commissioner Rob Manfred wrote in his ruling that no Cardinals employee other than Correa participated in the hacking and there will be no further discipline.

“Although Mr. Correa’s conduct was not authorized by the Cardinals, as a matter of MLB policy I am holding the Cardinals responsible for his conduct,” Manfred wrote. . “Mr. Correa held positions in the Cardinals’ front office that enabled him to have input into his club’s decisions and processes.

“As a result, I am holding the club vicariously liable for his misconduct.”

Monday’s actions seemingly put an end to a saga that began when Correa, a former colleague of Astros GM Jeff Luhnow, hacked into their computer systems in 2013 and 2014 after Luhnow and other Cardinals executives joined the Astros. Correa’s role came to light in 2015, when the Cardinals terminated him while he was under federal investigation. In July 2016, Correa was sentenced to 46 months in prison and ordered to pay the Astros $279,000 in restitution.

"This unprecedented award by the Commissioner's office sends a clear message of the severity of these actions,” the Astros said in a statement.

Said Cardinals Chairman and CEO William DeWitt Jr.: "We respect the Commissioner’s decision and appreciate that there is now a final resolution to this matter. Commissioner Manfred’s findings are fully consistent with our own investigation’s conclusion that this activity was isolated to a single individual." 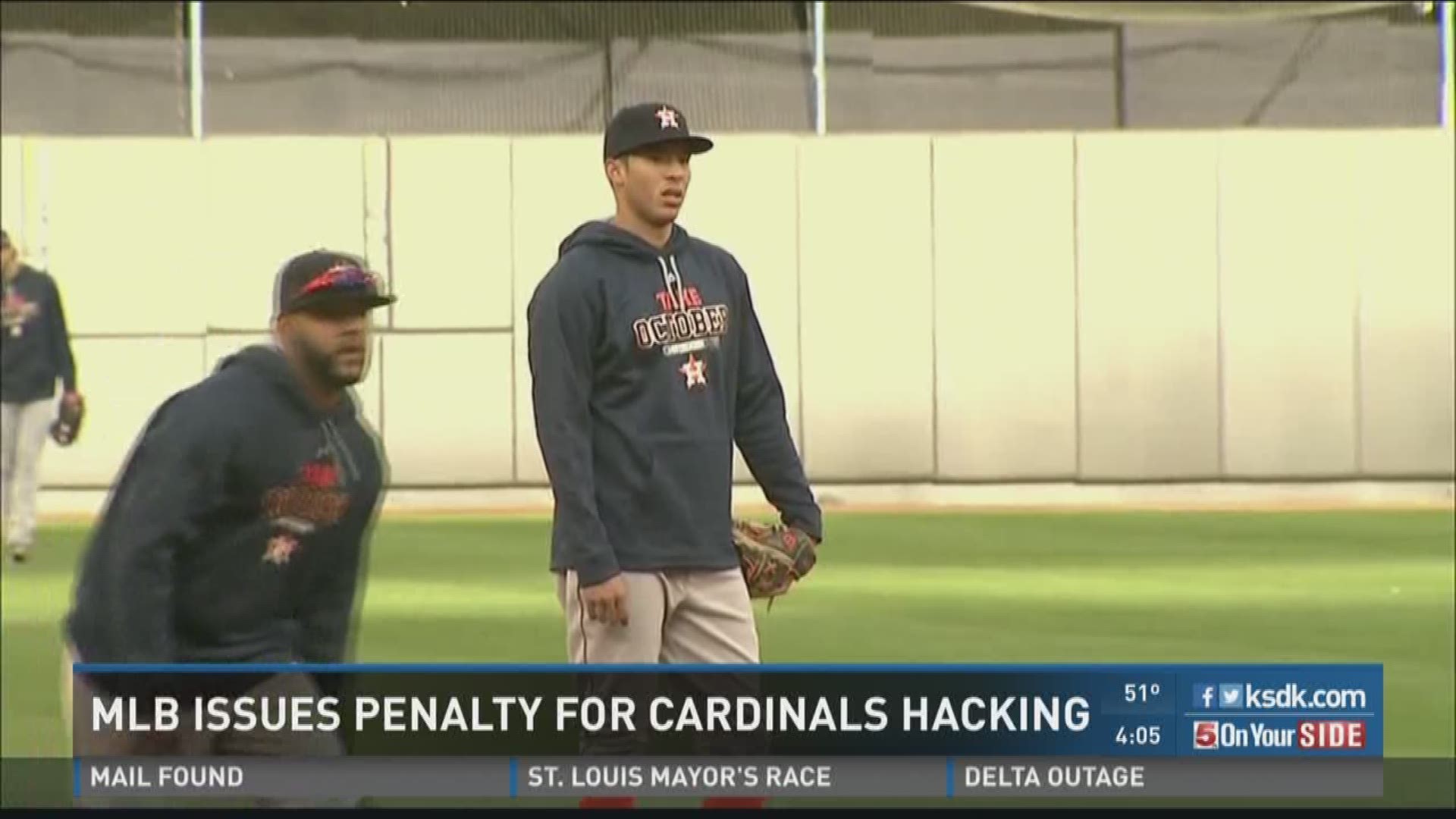 After Correa's guilty plea, the U.S. Attorney's Office stated that Correa admitted to illegally accessing the Astros' proprietary information from March 2013 through at least March 2014. The Astros' rankings for every eligible player in the draft as ranked by their scouts and regional scouting reports of prospects were among the information Correa hacked into in 2013.

Correa was able to obtain password information from a laptop that was turned into him from a Cardinals employee who had left St. Louis to take a job with the Astros. Correa used variations of the passwords on the laptop to gain entry into the Astros' servers.

The damage to the Astros was evident: Major league scouting information is highly proprietary, particularly in an age when advanced metrics and varying models to assess prospects have proliferated the industry.

Manfred indicated that the Correa case will serve as a precedent for similar actions in the future.

"The type of potential comparative harm the Astros suffered as a result of Mr. Correa's conduct is not amenable to precise quantification," Manfred wrote. "MLB clubs fiercely compete with each other in their ability to acquire and process player-related information. I am prepared to find as a matter of policy that a Club suffers material harm when an employee of another club illegally accesses its confidential and proprietary information, particularly intrusions of the nature and scope present here.

"In addition, as a result of Mr. Correa's conduct, the Astros suffered substantial negative publicity and had to endure the time, expense and distraction of both a lengthy government investigation and an MLB investigation."

Now, they will reap a significant benefit. Houston gains the Cardinals' top two picks - Nos. 56 and 75 - and retain their own picks at No. 15 and No. 53. Almost as significantly, they will add $1.8 million to their pool of money to pay draft picks, giving them enviable flexibility to sign players under or over their given "slot value," depending on how the draft unfolds.

The Cardinals, meanwhile, will not have a draft pick until the 94th overall selection.

"This has been a long and challenging process for all of us, especially those within our baseball operations department,” said Cardinals GM John Mozeliak. “We have learned a great deal along the way and we have taken additional steps to ensure that something like this doesn’t ever happen again."

Correa joins a permanently ineligible list that includes all-time hits king Pete Rose and former New York Mets reliever Jenrry Mejia. Rose is serving a lifetime ban for gambling, while Mejia was banned in February 2016 for testing positive for steroids three times in less than a year. Mejia is eligible to apply for reinstatement.

Commissioner's opinion and order of breach of Astros systems