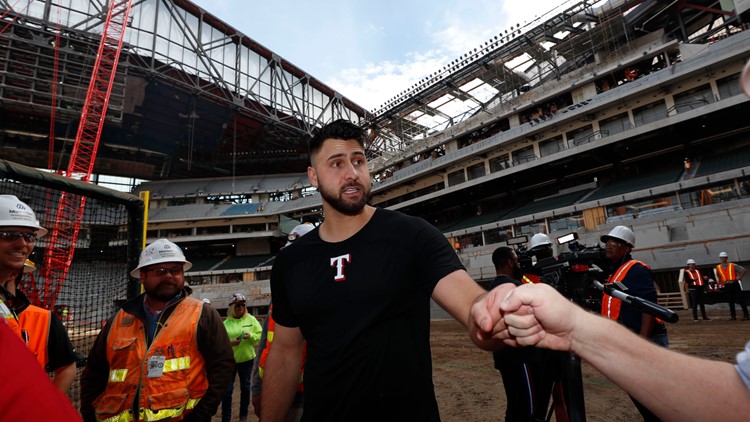 Photo by: AP Photo/LM Otero
Texas Rangers Joey Gallo is greeted after a batting practice at the under construction baseball field at the new Rangers stadium in Arlington, Texas, Wednesday, Dec. 4, 2019.

With Gallo entrenched, Rangers have hope for retooled outfield

DALLAS — As the Texas Rangers take the field for the first time at Globe Life Field in a couple of months, they’ll be doing so after making what amounts to wholesale changes in their once excess-staffed outfield.

There are names representative of the present and future involved in the 2020 version, and one name that many thought would have been long gone by now but remains as integral a part as any.

2019 was a weird season for those roaming the outfield at Globe Life Park for the final time.

Veteran Hunter Pence made the team over perennial minor-league top hitting prospect holdover Willie Calhoun. Pence was fresh off of a stint in the Dominican Winter League to humble himself following the worst season of his career and had apparently revamped and rediscovered his swing. The limited results in Spring Training seemed to show the improvement, thus the Arlington native minor-league signee secured the Opening Day roster spot.

Even though he passed a player considered a part of the future, Pence produced. Though primarily used as a designated hitter, he would go on to play 23 games in the outfield, split between left and right field. That could have been Calhoun’s spot in a retooling year, but Pence ended up making the All-Star team in his rebound season for a feel-good story over the summer.

Even though an injury limited him to only 83 games, the All-Star nomination and the .297/.358/.552 slash with 18 HR and 59 RBI netted him the Comeback Player of the Year award. His leadership and presence were the main reason new manager Chris Woodward wanted him on the team to start the year, but the performance was icing on the cake. After the 2019 rebound, Pence has yet to sign with a club for 2020.

To some surprise, Delino DeShields was still on the team entering 2019. Having shown a marked improvement defensively in center field by the end of 2018, DeShields’ name was perpetually in the rumor mill to be traded.

The bat, however, was still a hindrance. While he finished 2018 with an OBP of .310, a lead-off style offensive player with the speed of DeShields would be expected to do more. That’s what probably kept him in Texas last year.

DeShields took the majority of the workload at center field with 112 games. His offense improved to a .249/.325/.347 slash and his defense was consistent. That production finally did earn him a trip out of Texas as he was included in the deal with Cleveland that brought Corey Kluber to the Rangers this winter.

One of the bright spots of the 2019 season was the emergence of Joey Gallo, not just as a more refined hitter, but also an MVP-caliber bat who could play center fielder while also staking a permanent spot in the outfield after years of flirting with the infield. Many initial projections had Gallo as a first baseman/corner outfielder even as he came up playing third base. No one saw a 6-foot-5, 235-pound slugger covering much ground in center field. Gallo was athletic enough to pull it off without ever looking out of place.

Gallo, of course, is more naturally suited to right field, where he will play the majority of his innings in 2020 following the trade of Nomar Mazara. Gallo’s eight outfield assists in his 63 starts in the outfield displayed the appropriate arm strength for right field which will be a feature in 2020. But not only did he hold his own in his time in the outfield – he excelled.

His season was shortened by injury – which is why he might not see as much time in the more demanding center field in 2020 – but his prowess in the outfield gave Texas a lot of flexibility and will continue to do so.

Gallo made the All-Star team in 2019 and, in the only pitch he’s seen as an All-Star, he homered in what was essentially the game winner for the American League. The Rangers and the baseball world are hoping he makes it back to the game (and the HR Derby) in the upcoming season.

Shin-Soo Choo was as consistent as ever, playing in 151 games between DH, right and left field and putting up numbers just a little better than his career line with Texas. The 2018 All-Star was another name rumored to be on the trading block, simply because of the enormity of his $20 million contract and the team still rebuilding.

Many would contemplate Texas taking on a lot of money to offload the veteran outfielder to make room for younger blood like Mazara and Calhoun. General Manager Jon Daniels, however, held fast to the unwavering Choo and was rewarded with another positive season.

Surprisingly, it was Mazara that failed to impress. While his overall numbers improved ever-so-slightly, The Big Chill was in his first arbitration year, earning enough money to be considered an investment in the future. The expectations on Mazara were perhaps unfair, but the 24-year-old didn’t show the improvements the team was looking for in 2019 and something had to give in a crowded outfield.

With a breakout star in Calhoun ready to take the ball and run, Mazara needed to become the young core household name player to keep his once unquestioned spot. Couple that with his continually declining defense in right field, to the point of becoming a liability, and fans were already viewing Mazara as the odd man out before he was sent to Chicago in December.

Calhoun, as mentioned, stepped up his game. The central piece in the Yu Darvish trade to the Dodgers in 2017 flourished in his 83 games at the big league level, showing more promise and potential with higher upside with the bat than Mazara. Willie slashed .269/.323/.524 over those 83 games and displayed much improved defense for a converted infielder.

Calhoun’s breakthrough 2019 season began with a commitment to getting into better shape and his hard work not only paid off, it was rewarded too.

Perhaps the biggest surprise of all in 2019 was the versatility and value that Danny Santana brought seemingly out of nowhere. Probably one of the bigger bargains of the 2018 winter, Santana was originally brought on as a utility infielder, but was eventually given a few tries in center field in the later stages of the season.

That proved to be an eye opener that likely played into some of the decisions made this off-season. Santana ended up with 51 games in the outfield, sporting a Rangers MVP-level line of .283/.324/.534, a 20/20 season (28 HR, 21 SB), and 81 RBI under his belt. The 28-year old proved to be indispensable as the season wore on and as Texas continued to try to defy the odds and play spoiler in September.

The era of Delino DeShields as a Texas Rangers center fielder is over. With two years of control remaining, Jon Daniels included DeShields with high-velocity reliever Emmanuel Clase in a deal to Cleveland for two-time Cy Young winner Corey Kluber. DeShields was somewhat taken aback, but bats like Joey Gallo and Danny Santana ended up usurping the younger DeShields.

There is the potential that center field prospect Leody Taveras could impress in spring training and start the season on the bench as a backup outfielder. But Santana and Gallo are able to roam every position in the outfield. Shin-Soo Choo continues to be productive and will still suit up in the outfield when called upon while prospect Scott Heineman provides a level of depth across the outfield. Taveras might be best suited to continue his journey in the minor leagues until a full time spot opens up.

Nomar Mazara, as noted, is gone from the fold as well. The White Sox and Rangers exchanged young outfielders, as Mazara went to the South Side and Texas acquired Chicago’s 2018 second-round draft pick Steele Walker, who spent 2019 playing in single-A. Walker, although older than Mazara was when he made his debut, gives the Rangers more controllable years of a future outfielder and supplements their farm.

Currently, it would appear that Texas dealt one outfielder too many, as their depth options aren’t exactly on the experienced level. Rumors have circulated that Texas is a front runner to land free agent outfielder Nicholas Castellanos, the former Detroit Tiger and Chicago Cub, who came up playing third base but has been in right field in recent years. Should he sign, the Rangers would almost certainly be asking Castellanos to bring a first base mitt with him to spring training but he could spell Gallo or Calhoun in the outfield at a moment’s notice.

The current lineup in Texas isn’t completely devoid of offense, with the likes of Gallo, Santana, Choo, Calhoun, Elvis Andrus, and Robinson Chirinos providing average and power, but lengthening the lineup with a right-handed bat like Castellanos would be an aggressive, winning move from Jon Daniels. Castellanos put up a strong offensive line in his time with Detroit, but finished the year incredibly strong as a member of the Cubs, slashing .321/.356/.646 in 51 games with Chicago.

Sporting an outfield left to right of Willie Calhoun, Joey Gallo and Nicholas Castellanos with Danny Santana as a roaming 4th outfielder and Shin-Soo Choo available in a pinch would give Texas a potent string of bats and a serviceable outfield in their new home.

Should the Rangers look to continue adding to the outfield or are they set? Share your thoughts on the outfield in Texas with Matt on Twitter @FisherWritesMLB.