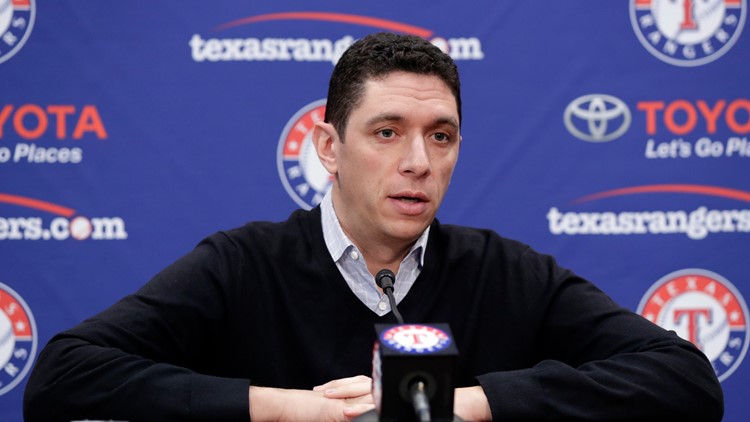 DALLAS — This week, in San Diego, the annual Major League Baseball Winter Meetings are being held. While it’s not a given like it used to be, a whole bunch of the juicy action regarding blockbuster trades and top-name free agents finding new homes happens this week as all the decision-makers from around MLB descend upon one location looking to get their winter shopping done before the holiday season.

After a hot stove season that froze over in 2018, some of the action has already happened in 2019. Catcher Yasmani Grandal, who banked on himself last season with a pillow one-year contract, found a home with the White Sox for four years. Texas target Zack Wheeler landed in Philadelphia on a deal north of $115 million. Cole Hamels, the former Rangers lefty, is headed to Atlanta for a year. The Padres made a move to acquire Jurickson Profar from the Athletics.

The Texas Rangers haven’t been quiet in the first few weeks of the offseason, either. They’ve signed two middle-to-back end rotation members with Kyle Gibson and Jordan Lyles inking multi-year deals. The money committed to those two won’t bust the budget by any stretch and they provide a good foundation for a five-man rotation when paired with Mike Minor and Lance Lynn and prospects banging at the door in Nashville.

What then should we look for Jon Daniels and company to get up to in San Diego while other teams are on the pursuit of Gerrit Cole?

It’s not a secret that the top free agent position player on the market is third baseman Anthony Rendon, who was most recently seen winning the World Series with the Washington Nationals. It has also been quite widely known that the Texas Rangers are making him their top priority.

With the glory days of Adrian Beltre manning the hot corner now too far to spy even if you squint at the rearview mirror, and with Isiah Kiner-Falefa and Danny Santana on the roster as virtually the only Major League-ready third basemen, Texas desperately needs an upgrade at third base and they want a marquee name like Rendon as they go into Globe Life Field. The fit is there.

Yes, Texas has worked hard to fill the minors with interesting prospects at the position, but players such as 2019 first-round draft pick Josh Jung remain far away from being meaningful contributors. The Rangers can get closer to their goal of contending in their new ballpark with an elite player like Rendon firmly in the lineup for the next half-decade or longer.

Rendon, about to go into his age-30 season, posted a career year in 2019. He slashed .319/.412/.598 over 146 games for Washington and played solid defense. That kind of production and consistency is something that the Rangers’ lineup sorely lacked last season, especially from a right-handed bat. The idea is that the Houston native would infuse a Beltre-like spark in the lineup and clubhouse and become the focal point on the next team that makes some noise in October for Texas.

One of the biggest problems Texas will run into is this: Anthony Rendon isn’t going to settle for 5-years and $80 million like Beltre did. On top of Rendon putting up a career year, as opposed to Beltre, who had come off of a successful pillow contract, the World Series hero is at the top of the free agency class.

Beltre was not even the Rangers’ top target in the offseason they signed him, Cliff Lee was, and Daniels was criticized at the time for the contract he gave to the future Hall of Fame third baseman. Now, Daniels would be criticized for not using every bit of the available budget to try and secure his services.

Rendon isn’t Beltre, but he’s close and he’s available on the free agent market at just the right moment. All it would take is a willingness to spend some of the money that Texas has been sitting on as they awaited the right opportunity. Rendon seems to check all those boxes.

Laying down a workable foundation for a rotation with the Gibson and Lyles signings was step one. Step two was gauging interest from Rendon himself, which Texas attempted to do with a meeting in Houston after Thanksgiving. Now, with some work out of the way, the Rangers can concentrate all of their recruiting power towards convincing Rendon that Texas is the right fit for him, as long as the contract that agent Scott Boras wrings out of the process also makes sense.

A deal may not be done this week, but Texas’ best sales pitch might be made in San Diego.

What if the effort fails? Or what if Boras decides to wait past when the Rangers would like to have a cemented option at third base? Texas could focus its efforts on Josh Donaldson, who had a great year with the Braves on a one-year deal, or they could work to trade a couple of their higher-rated prospects (potentially including Jung) to the Cubs. In return, they could get the 28-year old Las Vegas native – and friend of Joey Gallo – Kris Bryant. Bryant, though, could be a free agent in two years. Any chance of acquisition of Bryant would have to be paired with extension talks. That, however, might not be the worst thing.

The Rangers are starting with Rendon, though, with a wide-open wallet, and seeing where things go from there.

Adding two pitchers early in free agency gives the Rangers a workable five to start the season. Mike Minor, Lance Lynn, Kyle Gibson, Jordan Lyles and one up-and-coming prospect, likely to be Kolby Allard, give the Rangers a solid five.

It should be obvious by this point, but five starting pitchers aren’t going to get you through a season. Even though Texas can feel good about the five they already have making their starts, it never hurts to have more pitching.

While the major recruiting efforts look to be aimed at Rendon, another eye must be kept on the starting pitching market. These moves may not be secured until well after the Winter Meetings, but touching base with the likes of Gio Gonzalez, Clay Buchholz, Andrew Cashner and even Felix Hernandez for depth and minor league pitching options would be prudent.

The Rangers could also look to fill that fifth spot with someone more proven than Allard or the other hopefuls in Triple-A looking to win the spot. Julio Teheran was non-tendered by the Braves and would bring upside to the bottom of the rotation. Tanner Roark, Wade Miley and Brett Anderson could provide some interesting options as well.

There’s always the possibility that – should the Rangers land their third base target or whiff on the bats they’re interested in – Texas could also look to improve further by dipping their toe into the top of the middle-tier of starters and see what the market for pitchers like Dallas Keuchel and Hyun-jin Ryu are looking like. Add one of those guys or a Madison Bumgarner type to the rotation and then you could start to see about trading for bats from a position of surplus.

But it’s likely that the Rangers will only be circling back to the pitching market later this winter to bolster their depth. An intriguing option on that front could be Martin Perez. Perez, a former flameout with the Rangers, seems to have reinvented himself in Minnesota by adding a cutter to his repertoire.

With Texas signing former Twins starter Gibson, Perez has a link there as well. The lefty put up a pedestrian 5.12 ERA, but also drastically increased his K/9 to 7.3 and kept his ground ball rate high. A return to a potentially more pitcher-friendly park in Arlington might help to benefit his numbers. Perez, though, might be seeking to be paid more like a middle of the rotation pitcher, instead of a back of the rotation pitcher and it’s always possible that a reunion isn’t in the best interest for either party.

Jeff Mathis and Jose Trevino might be an alright tandem to start the season, especially if Trevino realizes his potential. Both are extreme defense-first catchers, however, as the Rangers continue to transition to favoring pitching staff handling backstops over catchers who provide much offensive production. Obviously, both would be preferred, but this is a shift in how the Rangers operate at the position and they seem likely to see it through even if they continue to have growing pains and an easy out in the lineup.

Even so, I’m not sure if Texas sees both of them as the backstop duo to lead them into the playoffs. Mathis is entering the final year of his two-year contract. The potential of acquisition of another backstop at the trade deadline and unloading Mathis to a team with a need for veteran catching leadership remains a possibility.

On the free agent side, former Astros and Rangers backstop Robinson Chirinos and Martin Maldonado represent the top of what’s left at a position that was plundered early on – and those two might not be of enough interest to distract the Rangers from their priorities right now.

Texas may choose to play more for the depth side of things, looking for non-roster, spring training invitees to pick up over the winter. It’s a position, on paper, that Texas could upgrade, but it might not be a priority in San Diego. Classify catcher as one of those items on the shopping list that Texas can look for if they have room in the cart or later on when they get home and try to finish things up with some online shopping later.

After several winters of staying out of the fray while keeping their powder dry as they retooled, look for Jon Daniels and the Rangers to be in the Winter Meetings headlines a little more often this week than in recent years, especially if the Rendon pursuit gets hot and heavy.

After years of not playing at the top of the free agent market, the Rangers are needing to be far more active in this class, not just because they are heading into a new park, but because the time for reshaping the roster without the expectation of competing is nearing an end. There was never supposed to be a rebuilding era. If Texas can land its targets, it might be time to start dreaming of October baseball in earnest again.

Do you think the Rangers will be able to land a top free agent in San Diego this week? Share your Winter Meeting predictions with Matt on Twitter @FisherWritesMLB.