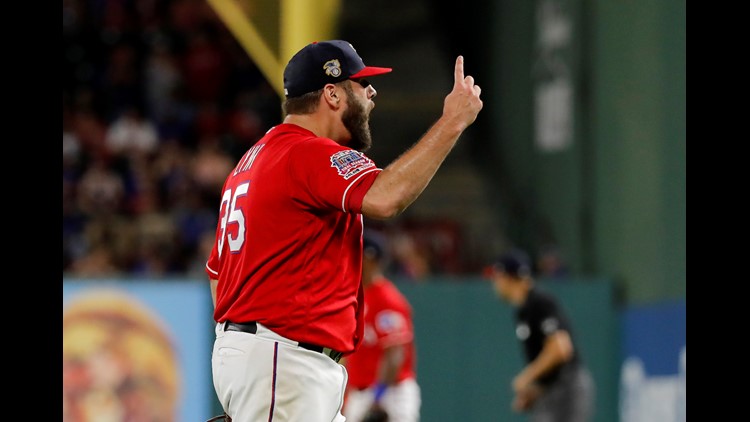 Photo by: AP
Texas Rangers' Lance Lynn celebrates after getting Los Angeles Angels' Shohei Ohtani to fly out to end the top of the seventh inning of a baseball game in Arlington, Texas, Thursday, July 4, 2019. (AP Photo/Tony Gutierrez)

Should the Rangers shake up the market by including Lance Lynn at the trade deadline?

DALLAS — When free agency hits, there’s usually one big domino that has to fall before the other big name free agents start signing. The same can be said for trade season, but this season, it seems to hold true more than most. With the trade deadline just over a day away, and rumors of a weak buyer’s market and teams asking for an overpay, the status of the Texas Rangers is even more in flux.

Despite falling to .500 after their series with Oakland, Texas could still conceivably buy. The new, all-encompassing trade deadline of July 31st means that there’s still two full months of baseball to be played. For two months, the Texas Rangers were one of the better teams in the game.

RELATED: Should Texas Rangers be buyers at trade deadline?

Could a little infusion of energy with a new player reignite that fire? Or do they stick with a conservative game plan and stay the course of staying competitive, just not contentious? How they handle Mike Minor and Lynn will speak volumes.

Would You or Wouldn’t You: Trade Lance Lynn

Why You Would: Despite Mike Minor being the Opening Day starter, despite the fact that Minor was the All-Star and was, for a time, one of the best pitchers in the American League, Lance Lynn has been the Rangers’ most consistent and steadfast pitcher.

Well on his way to another 30+ start season, Lynn sports a 13-6 record, 3.83 ERA, a career low 2.1 BB/9 and a career high K/BB ratio of 4.85. By Baseball Reference WAR, Lynn is second in the AL behind Minor and third in baseball behind Max Scherzer. Starting pitching is always an area of need for contending teams and the way Lynn is rebounding after his subpar 2018 would be a boon for any of them.

Let’s talk about that contract, too. Lynn was just signed before this season. His contract runs through 2021 at an average annual value of $10 million a year. If the stats weren’t attractive enough, then the contract should seal the deal as it's an incredibly team friendly deal.

All of the above might be positives in favor of the Rangers hanging onto the hurler, but they can also be used as value to get a very good haul from teams. A top prospect package or even a controllable MLB-ready player might not be too much of an overpay for one of the better, more consistent pitchers in the game who is signed at an easy to digest rate.

The Yankees, Red Sox, Rays, Indians, Twins, Astros, Cardinals and Brewers could all use someone of Lynn’s caliber as they start the chase to October. While Minor might seem the more readily attainable of the two Rangers’ arms, adding Lynn could change the face of a couple of races in MLB.

Why You Wouldn’t: All of that stuff mentioned above? It’s not so bad if the Rangers decide to keep it! Texas doesn't have to trade Lance Lynn and they might be ill advised to do so if they think he will continue to be as good for as cheap over the next couple of seasons.

All obvious observations aside, the domino that fell on Sunday was the Blue Jays’ trade of Marcus Stroman to the New York Mets for a couple of lower level pitching prospects. The Mets did well to gain Stroman, who even if they don’t make a serious push for 2019, have the New York native for another year.

The Blue Jays, on the other hand, seemed to just acquire a couple of far off arms, pitchers who won’t be ready until well into the next window of continue in the great white north.

RELATED: Should the Rangers make Mike Minor available ahead of the trade deadline?

Industry perception is that it was a pretty light return for a top arm. If that’s the case, then teams aren’t going to pay a premium for Lynn, no matter how attractive the stats and contract look. And if that's how the market is playing out, then the Rangers shouldn’t pull a Toronto and just settle for the best of a handful of low-ball offers.

Lance Lynn is a premium pitcher in 2019 – Jon Daniels shouldn’t accept anything less than a premium return for him. With the opening of Globe Life Field just around the corner, having Lynn at or near the top of a rotation that leads next year's squad wouldn't be the worst thing in the world.

The Rangers may very well decide to be sellers over the next 24 hours. But that doesn’t mean they have to go full fire sale. They’d have to be blown away to trade Lynn which is probably why there hasn't been much smoke on the rumor mill for the right-hander.

Should the Rangers look to sell high on Lynn or keep him with two more years on his contract? Share your thoughts on the impending trade deadline with Matt on Twitter @FisherWritesMLB.