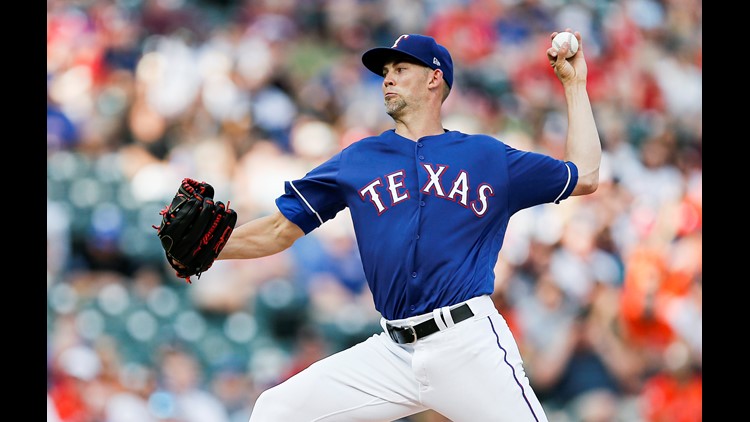 Should the Rangers make Mike Minor available ahead of the trade deadline?

DALLAS — With the Rangers’ skid hitting a season-high seven games in a row – following a sweep at the hands of the Astros in Houston – the conversations have started to turn from whether Texas will be a seller or a buyer to how much the club is willing to part with.

RELATED: Is it time for the Rangers to sell at the trade deadline?

While the expectation every year is to win baseball games, the overall expectation for this year was to put an entertaining product on the field and keep developing the core for the future. Playoffs certainly didn’t factor into the winter decision making of this club, much less making it to the World Series.

It’s interesting how in this past week, with one to go until the trading deadline, the buyers and sellers have started to very clearly separate themselves from the pack.

Whether it’s the Giants, who are making Bruce Bochy the figurehead of their sentimental hot streak, turning from seller into buyer, or fringe teams like the Angels and Padres, who were on the edge, much the same way Texas has been, starting to turn their focus towards selling, lines are being drawn.

Sadly, but not 100% unexpectedly, Texas needs to start thinking about their potential returns on some of their short-term assets, and it starts with the marquee name who could be traded from their rotation.

Would You or Wouldn’t You: Trade Mike Minor

Why You Would: Minor has been a workhorse this year. In his first, unrestricted season back in a big league rotation, Mike Minor has proved that he can stay at the top of a rotation and thrive. On the season, Minor is 8-5 with a 2.86 ERA over 20 games and 129 innings pitched. He sports around a 3-to-1 strikeout to walk ratio and a manageable 1.160 WHIP. He’s shown that he can come back from spending significant time in the bullpen, working as a starter with an innings limit, and then coming back full-force to succeed as a first time All-Star in 2019.

That’s a level of leadership in a rotation that a team with a few young arms on it with October hopes (Minnesota? Tampa? Milwaukee? St. Louis?) could severely benefit from.

With another year of control on his contract, even with his past three starts (the most recent of which wasn’t awful if you take out the homers), his trade value might never be higher for the Rangers. There should be just enough time for two more starts before the deadline, and since you CAN’T get rid of those past three starts, you can bet scouts will be looking to see exactly what his price should be.

Can Minor be moved for a good return? Absolutely. Even if he performs poorly in the next two starts, a team is going to come for a lefty arm with an extra year of control. If he pitches how he did the first half of the season, then that gives Jon Daniels some bonus leverage in asking price.

Why You Wouldn’t: Besides the obvious question of thinning out the 2019 rotation depth even further, you don’t really have to trade Minor. Conventional wisdom says that Minor should be the first to go if the Rangers are going to label themselves as sellers, but they could also just stand pat with the arms they have.

Getting rid of Minor could mean that another young arm has to come up from the system a little ahead of his time. That has a domino effect on the rest of the pitching corps, as the bullpen gets pressed into heavier duty without an innings eater like Minor to go along with Lance Lynn.

Supposing the Rangers do trade Minor, one possible option would be to bring back Derek Holland to absorb some innings as the former Ranger was just cut loose by the Giants on Sunday.

Nevertheless, keeping an eye on the future doesn’t necessarily mean selling off the present; it could also mean to keep strengthening what you have in the farm system by allowing them more time to mature.

Additionally, having Mike Minor be one of the top guys in the rotation going into 2020 and Globe Life Field wouldn't be the worst thing in the world for the Rangers. At his age, Minor, who will be 32 when the new field opens, could still have several years of winning baseball left in his arm.

Additionally, with his experience in the bullpen, he could extend his usefulness beyond his starter years should the Rangers consider extending his team-friendly deal. It’s a longshot, but Texas could just turn around and choose to keep Minor for longer than just 2020. That would still be a move designed for the future of the club without losing the actual arm.

If you can get two-three more years of top-to-middle of the rotation innings from the lefty and then shift him to the bullpen for a couple of years, wouldn’t that be optimizing a quality arm? With how Minor has been talking lately, if you move him, it sounds like any possibility of a reunion might be completely burned, even if the Rangers end up making 2021 their target year of contention.

With less than ten days to go until a decision on Minor has to come, the Rangers have a big choice to make. Do they want to trade him for assets that are valuable more in line with their next reasonable window of contention, or do they roll the dice on him continuing to be a valuable arm going forward and bank on him topping the rotation for their next playoff run?

Would you trade Mike Minor to help fuel the rebuild or hang onto him and hope he is a big part of a winning team in 2020? Share your thoughts with Matt on Twitter @FisherWritesMLB.