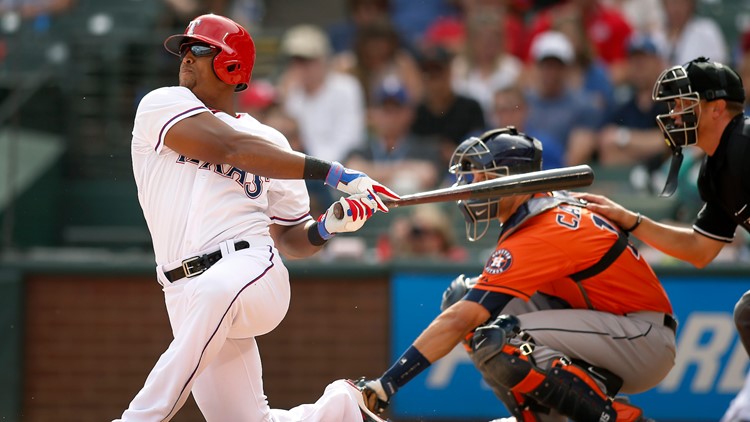 Photo by: AP
Texas Rangers third baseman Adrian Beltre (29) goes to his knees on a follow through swing against the Houston Astros in the sixth inning in Arlington, Texas on Friday, April 10, 2015. (AP Photo/Brad Loper)

Adrian Beltre to be inducted in Texas Sports Hall of Fame

DALLAS — Adrian Beltre will be inducted into the Texas Sports Hall of Fame in Waco on March 28. The former Los Angeles Dodger, Seattle Mariner and Boston Red Sox third baseman carved out a great career before he joined the Rangers, where he would finish out his run in Texas as a legend of the sport.

Now he will be honored for those years as a Ranger by joining the greats who have played in Texas.

Beltre provided a near-limitless number of memories with the Rangers after coming to Texas in 2011. Beltre was already a known quality when he arrived, but he found camaraderie with the team as the former ascended to the top of the mountain as an all-time great third baseman, and the latter adopted the man as one of its own.

Beltre’s career stretched over three decades as a 21-year veteran but his best, most memorable years were in Texas. Indeed, Beltre spent more seasons in Texas than any other stop before retiring in 2018.

In the midst of the most successful run in team history, Beltre quickly became a fan favorite of Ranger fans with his brotherly antics alongside teammate Elvis Andrus. He was known for his elite defense, MVP-caliber hitting, and his joy on the field. Beltre’s quirks included the fact that teammates weren’t allowed to touch his head and his patented home run swing from one knee.

Fans were enamored with how easy he made it look at the hot corner, and his prowess with the leather earned him three of his five Gold Gloves after joining Texas.

In 2011, he helped lead Texas to their second-straight World Series appearance. Overall, Beltre played in 24 postseason games as a member of three division winners with the Rangers.

After playing the majority of his young days in pitchers’ parks, his time in Texas is where Beltre really thrived as a hitter, with 1,277 of his 3,166 career hits coming in his final eight seasons.

Beltre also seemed to only get better with age. After the age of 32, Beltre would belt 199 baseballs out of the yard while batting .304 and accounting for 2,133 total bases. Of course, while those feats will someday land him in Cooperstown, the endless entertainment he provided on the diamond was better than anything he did on the field in terms of fielding and hitting.

What made him such a beloved figure, not just in Texas but across the globe, is how he played the game. Beltre took his craft seriously but he never took himself too seriously on the field. Along with Andrus, it was one highlight moment after another.

Beltre played the game every night the way every athlete starts their journey, with boundless joy and a love for the game. We may never see a player who had as much fun playing the game as most of us had watching him play as we did with Adrian Beltre in his time in Texas.

Adrian Beltre is more than worthy of being in the Texas Sports Hall of Fame and hopefully one day soon we can witness him go into the National Baseball Hall of Fame.

Do you think we’ll ever see a player who is as talented, entertaining, and loves playing the game as much as Adrian Beltre did? Share your favorite Beltre memories with Patrick on Twitter @PatSportsGuy.