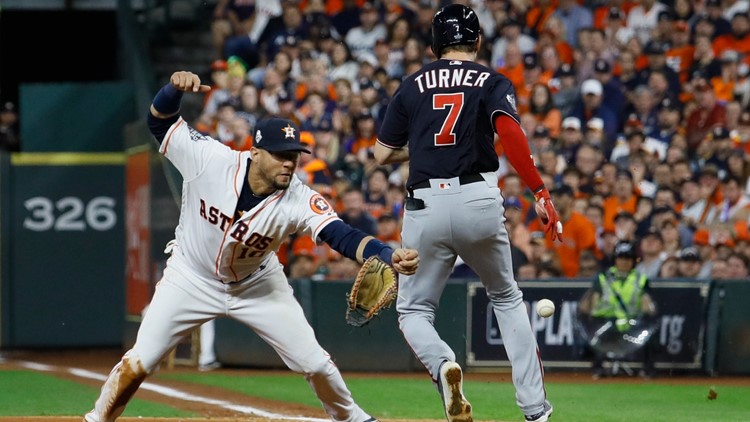 Washington Nationals shortstop Trea Turner was called out on a controversial interference call in Game 6 of the 2019 World Series vs. the Houston Astros on Tuesday.
Author: Ben Axelrod
Published: 10:03 PM CDT October 29, 2019
Updated: 9:14 AM CDT October 30, 2019

HOUSTON — The umpires are at it again.

In a World Series in which their inconsistent strike zone has come under the criticism, the officials waited until the sixth inning of Game 6 to make arguably their most controversial call, ruling Washington Nationals shortstop Trea Turner out due to interference.

The play in question came in the top of the seventh inning with Washington leading 3-2 and catcher Yan Gomes on first base. After Turner hit a dribbler to pitcher Brad Peacock, he ran toward first and turned toward second as Houston Astros first baseman Yuli Gurriel failed to come up with the ball.

Turner, however, was ruled out due to interference as the umpires ruled that his contact with Gurriel's glove was impermissible. After review, the call was confirmed.

So what should the ruling have been? According to code 5.09 (a) in the MLB rule book, the runner is only allowed to stray from the lane to touch first base. Since Turner wasn't in the lane when he stepped toward the base and made contact with Guriel, he was not granted the protection provided by the lane:

Despite Turner being ruled out, Anthony Rendon later hit a 2-run home run to give the Nationals a 5-2 lead. After arguing the call, Washington manager Dave Martinez was ejected, becoming the first manager to be ejected from a World Series game since Bobby Cox in 1996.

RELATED: Max Scherzer to start Game 7 of the World Series for Nationals if necessary