George Springer homered in his fifth straight World Series game, but it wasn't enough as Houston lost, 5-4, to Washington. 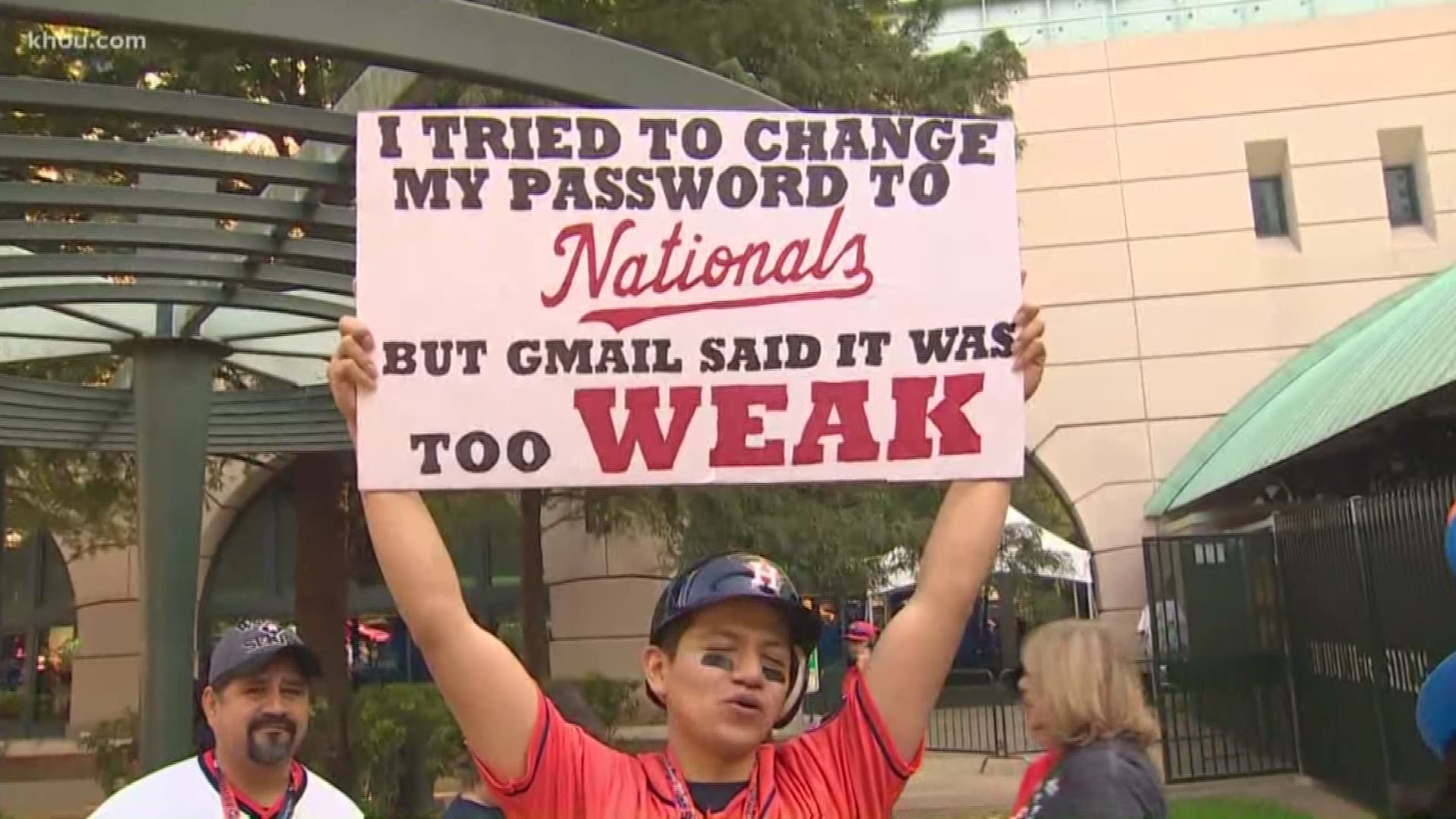 HOUSTON — The Astros had their chances.

But it wasn’t enough to overcome a 5-4 loss in Game 1 of the World Series to the visiting Washington Nationals.

“Any time you’re up against a good starting pitcher, you want to take advantage of every opportunity,” Astros manager AJ Hinch said.

Houston left 11 runners on base and was 3-for-12 with runners in scoring position.

Down 5-3 in the bottom of the seventh, the Astros had the bases loaded with rookie Yordan Alvarez, who was 5-for-8 with the bases loaded this season, including a grand slam. Nationals pitcher Tanner Rainey got Alvarez to chase a fastball out of the zone to end the inning.

Despite their lack of clutch hits, the Astros put quality at-bats together throughout the game but could never capitalize.

They jumped on starting pitcher Max Scherzer early when first baseman Yuli Gurriel hit a two-run, two-out double in the bottom of the first to give Houston a 2-0 lead.

The Astros took Scherzer, a reining three-time Cy Young Award winner, deep into counts and chased him out of the game in the sixth inning. Scherzer had thrown 112 pitches and allowed two runs on five hits. He struck out seven.

Springer jumped on Washington’s bullpen with a solo homer to lead off the bottom of the seventh. Springer set an MLB record with a home run in five consecutive World Series games. It was also Springer’s 14th consecutive postseason home run.

“I told him in the dugout we need to play in the World Series more often because he hits home runs every single time,” Hinch said. “He’s picking up right where he left off.”

Springer nearly homered again in the bottom of the eighth when he sent a 2-1 slider to deep center field. The ball missed clearing the outfield wall by mere feet before bouncing off the wall, away from an outstretched Victor Robles. That allowed Kyle Tucker to score and make it a 5-4 game.

In a battle of aces, Scherzer picked up the win against Gerrit Cole.

Cole had been dominate this postseason, but didn’t have his best stuff in his first World Series appearance.

Entering the game, Cole was 3-0 with a 0.40 ERA, and had only allowed one run in 22 2-3 innings. But it was a different tale against the Nationals.

Despite being spotted a two-run lead, Cole gave up a solo home run to Ryan Zimmerman in the second inning.

Juan Soto, the Nationals’ rookie outfielder, crushed a belt-high fastball to the Crawford Boxes in the top of the fourth to tie the game.

And he wasn’t finished.

In the fifth, with the Nationals ahead 3-2, Soto connected with a backdoor slider to left fielder. Astros outfielder Michael Brantley made a break for the ball, which ricocheted off the wall and allowed Adam Eaton and Anthony Rendon to score. Just like that, the Nationals had a 5-2 lead.

Cole admitted he didn’t have his A-game Tuesday night but said, “Outside of a couple pitches that tacked on a couple runs, we worked pretty well with what we had. These are the two best teams in the world right now so you try not to beat yourself up too much.”\

The loss snapped Cole’s winning streak at 19 games, which was a single-season MLB record. He hadn’t lost a game since May 22 when the Chicago White Sox handed the Astros a 9-4 loss at home.

“(Cole) lost a couple of key two-strike battles,” Hinch said. “I thought the Zimmerman pitch was a mistake and he made him pay with a homer. And Soto—he never really controlled Soto the whole night. He punched him the first at-bat and then after that Soto took some really good swings.”

Soto finished the night 3-for-4 with a home run, double and 3 RBI.

This is the Astros second World Series appearance in three years while the Nationals are making their first showing in franchise history. The Astros beat the Los Angeles Dodgers in seven games in 2017 to claim the franchise’s first title.

Springer paced the Astros with a 2-for-3 performance with 2 RBI and a walk. Gurriel went 2-for-5 with 2 RBI.

Justin Verlander gets the nod in Game 2 for the Astros who will face Stephen Strasburg of the Nationals. First pitch is set for 7:08 p.m.

Hinch stayed somewhat optimistic after the Game 1 loss, pointing out the Astros “put a lot of pressure” Washington’s bullpen. The Nationals used four relievers after Scherzer’s exit after the fifth.

“We’re a results-oriented game,” Hinch said. “At the end of the day, you have to win the game.”

The Nats go down in order in the top of the inning. And so did the Astros. Nats take Game 1, 5-4.

Soto continued his amazing World Series debut with a single in the top of the inning, but was left there.  In the bottom of the inning, Tucker singled and came home on Springer's double.  5-4 Nats.

The Nationals went down in order in the top half of the inning.  George Springer led off the bottom of the inning with a Springer Dinger!  Astros now trail 5-3.

Cole set the Nationals down in order in the top of the sixth.  Alvarez singled in the bottom of the inning but was left there.  Nats up 5-2.

The Nationals took a 3-2 lead on Eaton's single to bring in Suzuki, who had walked to open the inning.  Then Soto, who had homered earlier in the game, doubled to deep left, scoring two to make it a 5-2 Washington lead.

The Astros went down in order in the bottom of the inning.  Still 5-2 Nats.

In the bottom half of the inning, Alvarez singled and Springer walked, but they were left.  Still 2-2.

Both teams put one man on in the third...and both left them there.  2-1 Astros.

In the bottom of the inning, Yordan Alvarez walked, but was left there.  Still 2-1 Astros.

Trea Turner opened the game with a single and stole second base, but was left there when Gerrit Cole got the next three batters out.

In the bottom of the inning, George Springer walked and Jose Altuve singled.  After a couple outs, Yuli Gurriel doubled to left to drive in Springer and Altuve.  Astros lead the Nationals 2-0!

Here’s what you need to know about tonight’s game.

You Can Watch the Game

How We Got Here

The Astros won the American League West with the best record in baseball, 107-55, while the Washington Nationals clinched a wild card berth with a  93-69 record.

In the postseason, the Astros beat the Tampa Bay Rays in five games in the ALDS, then the New York Yankees in six games in the ALCS on an epic Jose Altuve home run in the bottom of the ninth inning to clinch the series. It’s worth watching again.

For a guy who's 5-foot-6 and was told as a teenager by Astros' scouts he was too small, just look at this determination and power.

The Washington Nationals beat the Milwaukee Brewers in a wild card game, before stunning the heavily favored Los Angeles Dodgers in five games in the ALDS. Then, they made quick work of the St. Louis Cardinals—an old National League division rival of the Astros—in the NLCS and swept them in four games.

“They’re both really good teams. We both have gotten to the World Series: one’s got a ring, one doesn’t.” — Astros manager AJ Hinch on the differences between this year’s team and 2017.

Fast Facts About Your Favorite Astros

If you're an Astros fan, you might want to part ways with your Alexa this series. The virtual assistant deployed by Amazon admits that while the Astros are statisically favored to win the World Series, she's picking the Nationals.