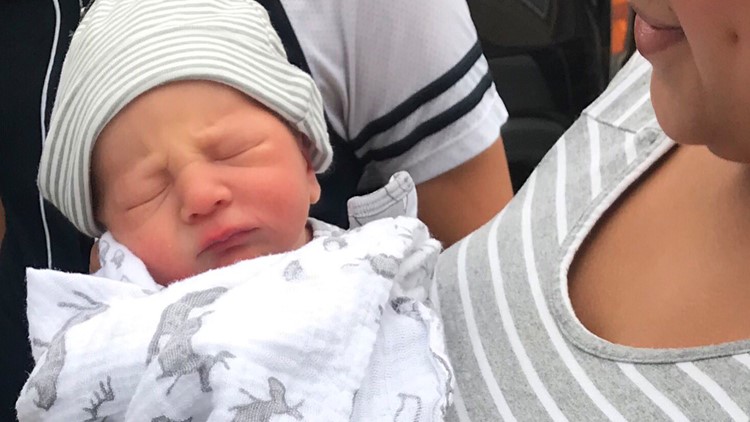 Photo by: KHOU
A baby was born the exact same time Alex Bregman hit a grand slam in Game 4

“The doctor got the final push, and then Bregman hit the grand slam,” Hank’s father Blake Bristow said.

The Bristow family had been at the hospital the entire day.

“We were camped out in the labor and delivery room for about 12 hours,” Bristow said.

She was induced later in the day, and the family waited, but the baby still wasn’t ready.

It was OK, though. The Bristows were happy they would be able to watch the Astros game.

“[Veronika] was like, ‘We’re not missing the game,’” Blake Bristow said. “All the doctors and the nurses they all had their Astros gear on. [Veronika] obviously had to be in a gown, but they let her keep her socks on.”

At approximately 9:30 p.m., things started to pick up at National’s Stadium and in the delivery room.

Bregman walked up to the plate. The bases were loaded.

“So she’s pushing, and between contractions, she’s got her oxygen and we’re watching the game, and the doctor is joking about it,” Blake Bristow said. “[The doctor was] like, ‘Are you actually watching the game right now?’ And she’s like ‘absolutely.’”

Little Hank was born at exactly 9:35 p.m. and the hospital erupted with cheers.

“And the grand slam,” Veronika Bristow said. “Perfect timing all around.”

Doctors and nurses at the hospital nicknamed Hank the “Grand Slam Baby.”

“Definitely a birthing story that will last for ages,” Blake Bristow said. “Maybe we’ve got a super star on our hands. It was perfect. We’ll definitely have a new fan on our hands, that’s for sure.”