Mistakes were made: Catcher Chirinos’ return rights a wrong for Rangers

The Texas Rangers erringly changed directions at catcher in 2019 by letting Robinson Chirinos walk but, with Chirinos back in 2020, they’re aiming to fix the mistake

Credit: AP
This is a 2020 photo of Robinson Chirinos of the Texas Rangers baseball team. This image reflects the Texas Rangers active roster as of Wednesday, Feb. 19, 2020, when this image was taken. (AP Photo/Charlie Riedel)
Author: Matt Fisher
Published: 3:50 PM CST March 5, 2020

It speaks volumes when the general manager of a team is able to admit a mistake in letting a player go to free agency, as Jon Daniels did this winter when he announced the return signing of Robinson Chirinos.

While Chirinos might not be a marquee name or a bona fide superstar player, his presence was notably missed in the stat line, and within the clubhouse, so being able to bring him back this winter with an admission of a miscalculation is huge.

In the case of backstop, the Rangers’ direction at the start of last season seemed to be the right way to go, but the results dictated that the team go old hat for this season.

It was a shock to many that the Texas Rangers would decline the extraordinarily cheap option on Robinson Chirinos and let their catcher of six years hit the free agent market. While 2018 was a step back from his outstanding 2017, he also caught more games than he had in any one year in his entire career. His numbers, for a catcher, weren’t terrible either: .222/.338/.419 with a career high 18 homers and career high 65 RBI.

Still, the Texas mentality for catcher in 2019 was to go defense-first. With a minor league Gold Glove winner in Jose Trevino in the system, and Isiah Kiner-Falefa getting good reviews for game calling, the Rangers brought aboard extremely light-hitting veteran Jeff Mathis to bring his intangibles and defensive prowess to Texas.

The idea was that Mathis – one of the most well-regarded defensive catchers in the game – would be able to guide Trevino and Kiner-Falefa through the rigors of catching in the big leagues. The problem that the Rangers thought they could live with was that Mathis has never, ever been regarded as an offensive perk. The 36-year old was a career .198 hitter when he inked his two-year deal with Texas. The idea was, if the defense was going to be great, then a black hole in the lineup could be hidden.

The defense wasn’t great. With more errors than he’d had in nine years, more passed balls than he’d had in six years and a caught stealing percentage that tied his career low, the result was pretty close to the exact opposite that the Rangers had hoped for from Mathis. In terms of catcher framing, Mathis was ranked 42 of 64 in baseball. Couple that with the veteran hitting well below even his horrific career numbers, and the club was forced to look elsewhere.

It should be noted here that both Mike Minor and Lance Lynn enjoyed career years with Mathis primarily behind the dish so it’s possible that his value remains as hidden to the naked eye as ever. Still, even as an ace whisperer, the shortcomings in Mathis’ game were increasingly more difficult for the Rangers to absorb with their entire lineup struggling at times.

Further down the depth chart, regression behind the plate and an injury to Kiner-Falefa thwarted the sophomore and, after he returned, the Rangers decided to pull the plug on his catching days. With Kiner-Falefa back in a ultitly role, the Rangers acquired journeyman catcher Tim Federowicz, who found his way into 29 games in the last half of the season.

Trevino, who the Rangers still expect big things from, caught 40 games and was essentially a baseline player. All in all, the catcher group for the Rangers was incredibly unremarkable in 2019.

Mathis, Trevino and Federowicz return to the fold for the Rangers. Federowicz is a minor league invitee to Spring Training, but figures to fit in at the minor league level as depth for the organization. Mathis is in the last year of a two-year contract. Trevino is currently sidelined with a finger fracture. Luckily, the Rangers moved quickly in the winter to bring back a familiar face.

At Robinson Chirinos’ re-introduction press conference, General Manager Jon Daniels was asked about his thoughts around the last year without the soft-spoken backstop.

“Before or after I made the mistake and didn’t pick up his option?”

An admission of a mistake and a return to Ranger blue for Chirinos seems to align well with the organization’s goals at catcher. Not only did the 35-year-old put up better numbers in his Houston season compared to his last season with the Rangers – slashing .238/.347/.443 with 17 homers and 58 RBI, he also picked up something defensively in the Houston organization.

Chirinos’ caught stealing rate leaped to 21% and he was still durable enough to be a primary catcher. He still may not be the best pitch framer around, but Chirinos still looks like he’s an upgrade over Mathis as an overall package at catcher. Indeed, Chirinos was the primary receiver for Justin Verlander last season as Verlander added another Cy Young Award to his trophy case.

In addition, Chirinos has familiarity in catching several of the young arms in the Texas system as well as catching Minor. It looks to be a nice year to come back to Texas for Chirinos.

Mathis is better served as a backup backstop anyway, and if Trevino can get back on track, the veteran tandem can still do the young catcher of the future some good behind the scenes. Chirinos, like when he went to Houston, could end up being a steal of a deal for the Rangers in 2020.

Do you think Robinson Chirinos will elevate the catcher position out of the mire that befell the Rangers in 2019? Share your thoughts with Matt on Twitter @FisherWritesMLB. 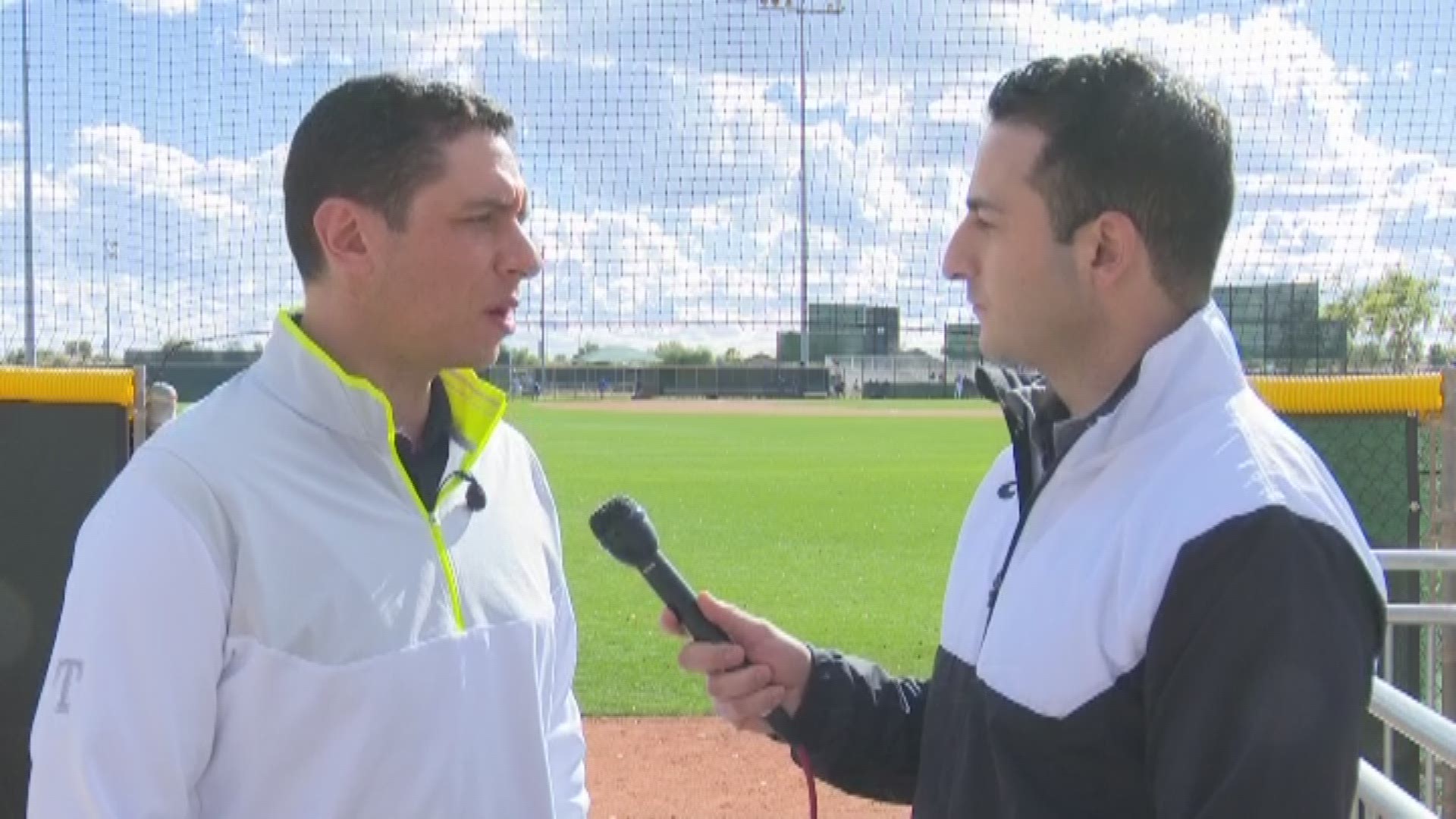