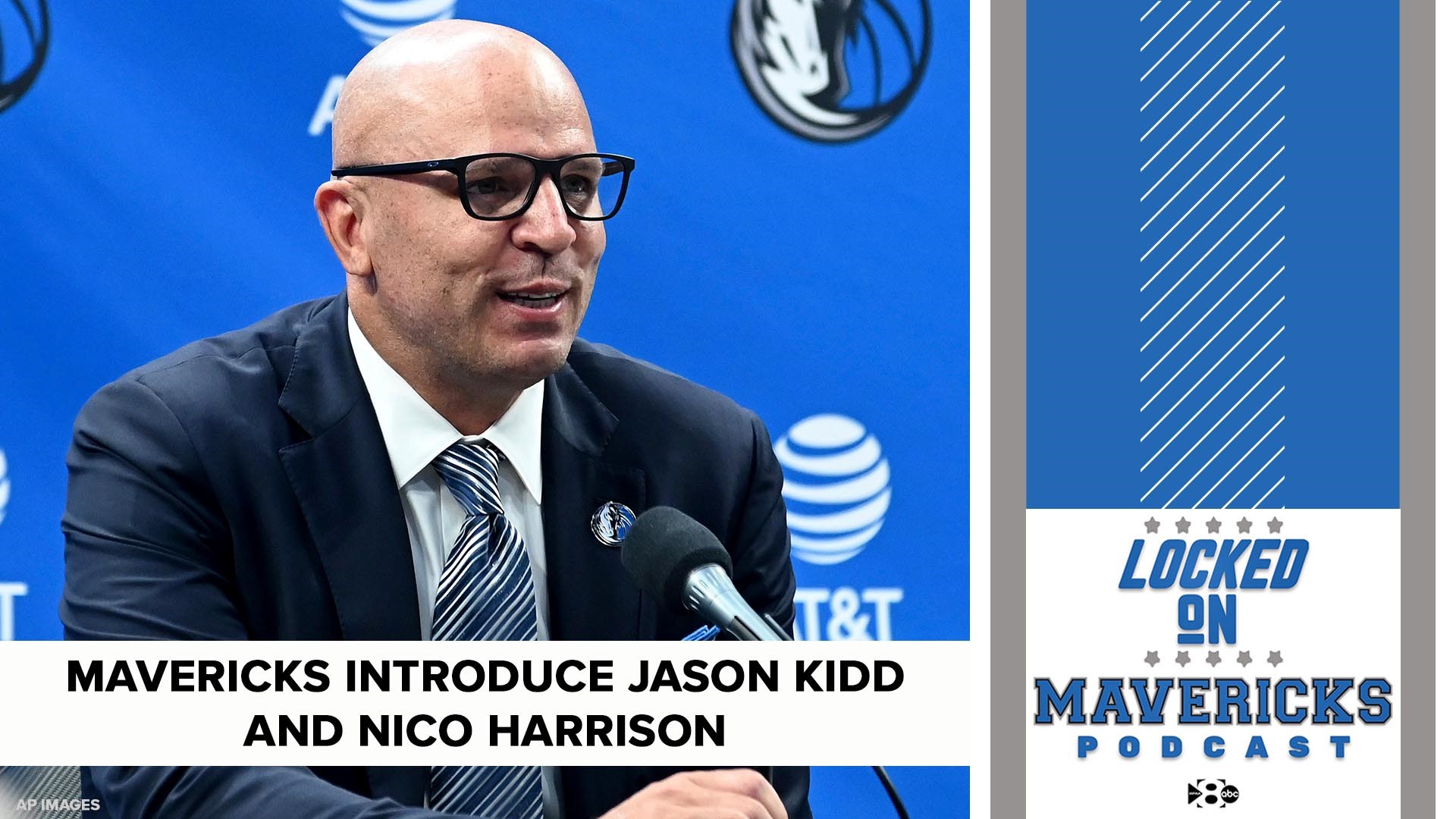 DALLAS — A new chapter for the Dallas Mavericks officially began Thursday as the team introduced Jason Kidd as its new head coach and Nico Harrison as the franchise's new general manager.

For Kidd, the press conference inside the American Airlines Center was in familiar territory.

"Well I guess this is 'hello Dallas' for the third time," Kidd said as he began his first public remarks as Mavs head coach. "What a dream come true."

Kidd had two stints playing for the Mavs, including a stretch from 2008-12, when he won a championship alongside Dirk Nowitzki.

Harrison, a longtime Nike executive, is embarking on his first front office job and called the Mavericks offer a "no-brainer."

Harrison was long sought after by many professional franchises, because of his vast array of relationships throughout the game. But Dallas, he said, was the right fit for him.

"At Nike, I was an executive. I had a dream job. So, to leave there, [a job] had to check all the boxes," Harrison said. This chance with the Mavs did. "The city, the coach, the fans, the owner. And it checked all the boxes."

Kidd's hiring, meanwhile, hasn't been without scrutiny. In 2001, he was charged with domestic violence. Mavs CEO Cynt Marshall, who was also present at the introduction, said she researched Kidd's past on her own and "had some great conversations" with him.

"I definitely felt comfortable as we talked about our values," Marshall said.

Kidd, in turn, called his conversation with Marshall "special."

"Some conversations are private, so I'm not going to tell you everything," Kidd said. "The journey that I've been on hasn't always been perfect. But we learn from our mistakes."

Now, both Kidd and Harrison will be tasked with developing a stronger roster around wonderkid Luka Dončić. The Mavs exited in the first round of the 2021 playoffs to the Los Angeles Clippers in the last two seasons, blowing a 2-0 lead this year. In 2020-21, the Lakers led the league in defensive rating. The Mavs ranked 21st.

Kidd, who had been an assistant for the Los Angeles Lakers the last two years, outlined his first priority: Playing better defense.

"Here in Dallas, we're going to play a little defense," Kidd said. "Because we know that we can score the ball, so we're going to pay attention to the small things, which will lead us down the road to that trophy."

RELATED: Mavericks not in the Finals, but the team already has the Suns and Bucks beat another way

Kidd and owner Mark Cuban in Thursday's presser also both supported Kristaps Porziņģis, who faced criticism during the playoffs. Kidd called the 7-foot-3 center "the perfect fit for Luka," and Cuban said Porziņģis has been "unfairly maligned."

Porziņģis has been at the center of myriad rumors, about trading him out of town. But the Mavs brass did their best to prop up either Porziņģis' trade value or his confidence.

Off the court, Harrison said his relationships across basketball - from across the NBA, college and international game - could benefit the Mavs. However, the new brain trust certainly tried to give the impression that they don't see many changes coming for this roster. That included Harrison, when asked what he needs to do to turn this into a championship roster, saying that simply having Kidd "get his hands on the roster" will improve it overnight.

This isn't to say that Kidd can't have an impact on the individual players, and how they develop. But they're going to need more than that.

Kidd says his coaching staff has not been finalized yet, despite several rumors swirling, including about former Mavs player JJ Barea. Cuban said Barea "has got a job, whenever he wants one," but said the exact role is up to Kidd and Harrison.

Kidd also said former Mav Tyson Chandler will join the organization for summer league play, to see if he wants to coach.

Kidd's previous stops as a head coach ended after one season with the Brooklyn Nets and a four-year run with the Milwaukee Bucks. His career coaching record is 183-190.

And what did he learn in Brooklyn and Milwaukee?

"To understand that you don't know everything," he said. "As a player, making that transition to becoming a head coach, you tend to think you know everything. And that's not true."