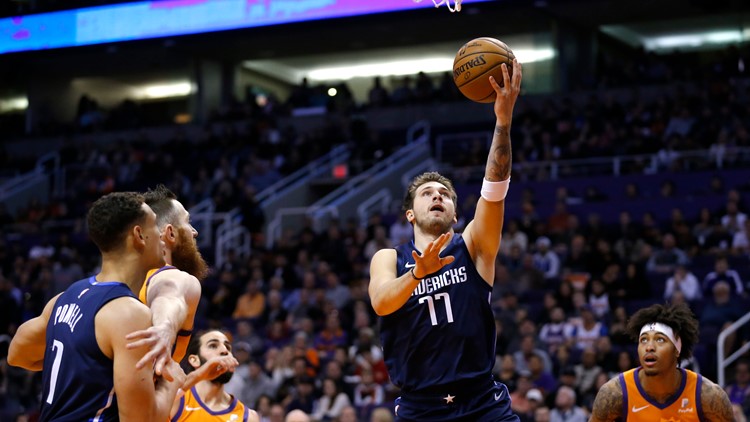 Photo by: AP
Dallas Mavericks forward Luka Doncic (77) drives against the Dallas Mavericks in the first half during an NBA basketball game, Friday, Nov. 29, 2019, in Phoenix. (AP Photo/Rick Scuteri)

Tuesday night in Dallas will be a showcase as two of the league’s exciting young stars will face off. Luka Doncic and the Mavericks return to the sweet nurturing Dallas air and the American Airlines Center to host Devin Booker and the Phoenix Suns.

Dallas finished their three-game road trip winners of two of three, rebounding from the frustrating loss in Utah with a 107-97 win over Oklahoma City Monday night.

Battle of the Backcourts

While Phoenix may not be a playoff contender this year, any team that boasts a young talent like Booker needs to be taken seriously. The former Kentucky Wildcat was drafted 13th overall in 2015, the same year that Kristaps Porzingis went 4th overall to New York, new Maverick Willie Trill Cauley-Stein went 6th to Sacramento, and that was the Justin Anderson year for the Mavs for those keeping score.

If you run a tale of the tape on both, Doncic takes the edge in every category, but that speaks more to Luka being a literal supernova than a jab at Booker. Both are nightly scoring machines, and Doncic’s stat-line is straight 2K.

Luka was selected to his first all-star appearance the previous week when the starters were announced, look for Booker to be added to the pool when the reserves are announced January 30.

Phoenix enters the game 2nd in the league in team assists, averaging 27.1 per game. Ricky Rubio has been dealing with ankle soreness and seemed likely to miss the game versus Dallas, but he was a participant in shootaround early Tuesday, a likely sign that he will suit up versus the Mavs.

The Suns usually move Devin Booker to point guard when Rubio is out of the lineup, so the drama will be good regardless of who is running the ball up the court for Phoenix. Rubio was Luka Doncic’s idol while with Real Madrid many moons ago, and Rubio has stated previously his belief that Doncic will be “the best European of all time”.

The win over Oklahoma City saw Tim Hardaway Jr. (+16) and backcourt mate Jalen Brunson (+12) led the Mavs in plus/minus for the night, showing their impact in addition to Doncic dropping 29 and 11 on the Thunder. Hardaway added 15 points on 6/12 shooting in 35 minutes, continuing to showcase himself as more than just a salary dump in the Porzingis trade.

Delon Wright, drafted one spot ahead of Anderson by Utah in that ‘15 draft, has resurrected in the last few games, ending the night against the Thunder with 14 points and 12 rebounds. The elevation of Curry one game, Delon the next, and Hardaway’s constant scoring presence continues to fuel an impressive backcourt for Dallas and should be an entertaining match-up versus Booker and Rubio, with J.J Barea around to be deployed as needed.

Trae Young and Luka Doncic will be linked with each other until their respective retirements, but neither went first overall. Atlanta selected Doncic 3rd overall with the intent of trading him to Dallas for Young, who was selected 5th. Phoenix won the draft lottery that year and the right to have first choice of whoever they wanted. Doncic, Marvin Bagley, and Young all saw that honor go to Deandre Ayton, the center out of Arizona. It made sense at the time, Phoenix was lacking a frontcourt star, and Ayton was already a local legend for the Arizona Wildcats. Flash forward just a year and a half later, and the Suns must be having buyer’s remorse.

If we see it, you know Deandre Ayton has been hearing it non-stop. Ayton is by no means a scrub, he is averaging 12.1 rebounds and 17.1 points for the season, but those numbers pale in comparison to what could have been.

The Luka envy must be real, imagine a backcourt with Booker AND Doncic. The Suns could have had that.

Ayton should be playing with a fire to prove his place, he knows the match-up versus Luka will be an NBA soap opera plot device. Kristaps Porzingis has had respectable numbers since his return from knee soreness, but bruising match-ups is why the team is so hesitant to play him major minutes at the 5 and Porzingis is already questionable Tuesday with the balky knee.

Ayton spells trouble for Porzingis should he play and the possible absence should lead to the Dallas debut of Willie Cauley-Stein. The Mavs have yet to play Willie Trill after acquiring him from Golden State over the weekend, and Tuesday’s match-up vs Ayton is the perfect time to do so.

Expect the Mavs to throw Cauley-Stein and Boban Marjanovic at him to make life as miserable as possible for Deandre inside.

Do you think the Mavericks will be able to make it back-to-back wins in their first home game in a week? Share your predictions with Irvin on Twitter @Twittirv.

Dale's Extra Point: Did you really need the death of Kobe Bryant to give you perspective?