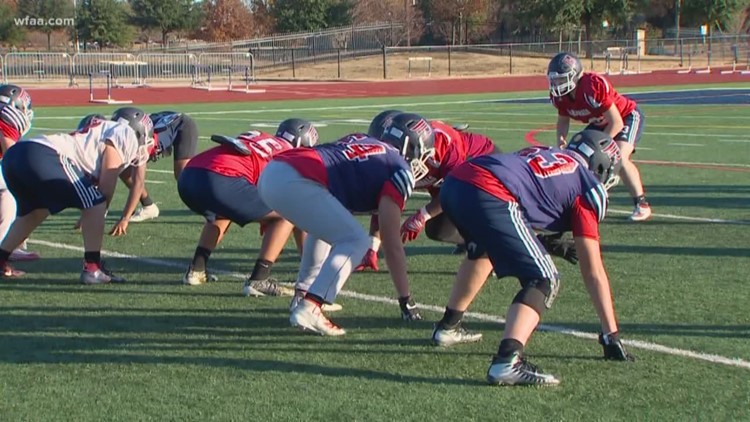 PLANO, Texas — The feeling at this football practice is unprecedented. The Cardinals of John Paul II High School in Plano are playing in December for the first time ever.

"Just everyone around the school you can feel everybody's happy, excited," said Cardinals quarterback Grayson James.

"This is different for the football team to finally be at this position, so it's pretty cool to know that we're making history," James said.

Former Cowboys defensive back George Teague (yes, the Terrell Owens-blasting safety) took over this program three-years ago, on the heels of three straight 0-and-10 seasons.

Now they're one win away from a state title. The team's motto is "outwork everyone."

The major turning point for the Cardinals was a remarkable game against Bishop Dunne earlier this season.

And when it was finally done the victorious Cardinals snapped a 58-game district losing streak that spanned nearly 10 years.

"Eleven overtimes, I think I had every emotion, from excitement to sadness, frustration," Teague said. "Man you name it, I went through it all, [even] crying."

Cardinal players said the marathon game help solidify their brotherhood and trust of one another.

"It just taught us to persevere and adversity," said defensive tackle, Dylan Harris. "Any obstacle, we're just ready to overcome it."

The final obstacle in their championship journey. The same Parish Episcopal team that beat JPII handily earlier this season.

Senior Carson Collins, who went 0-and-10 as a freshman, wouldn't have it any other way.

"We don't have a lot of people believing in us and that's how it's been our entire career here," said Collins. "Just for all that we've been through and just to do it for the school, it would be awesome."

"I think I'm going to have to wear these shades in the game because if we win I might drop a tear. And I don't want anyone (laugh, laugh) to see it," said Teague.

With the way they work, don't count them out.