Doctors did not expect Jaquon Curtis to live. Miraculously, he proved them wrong. 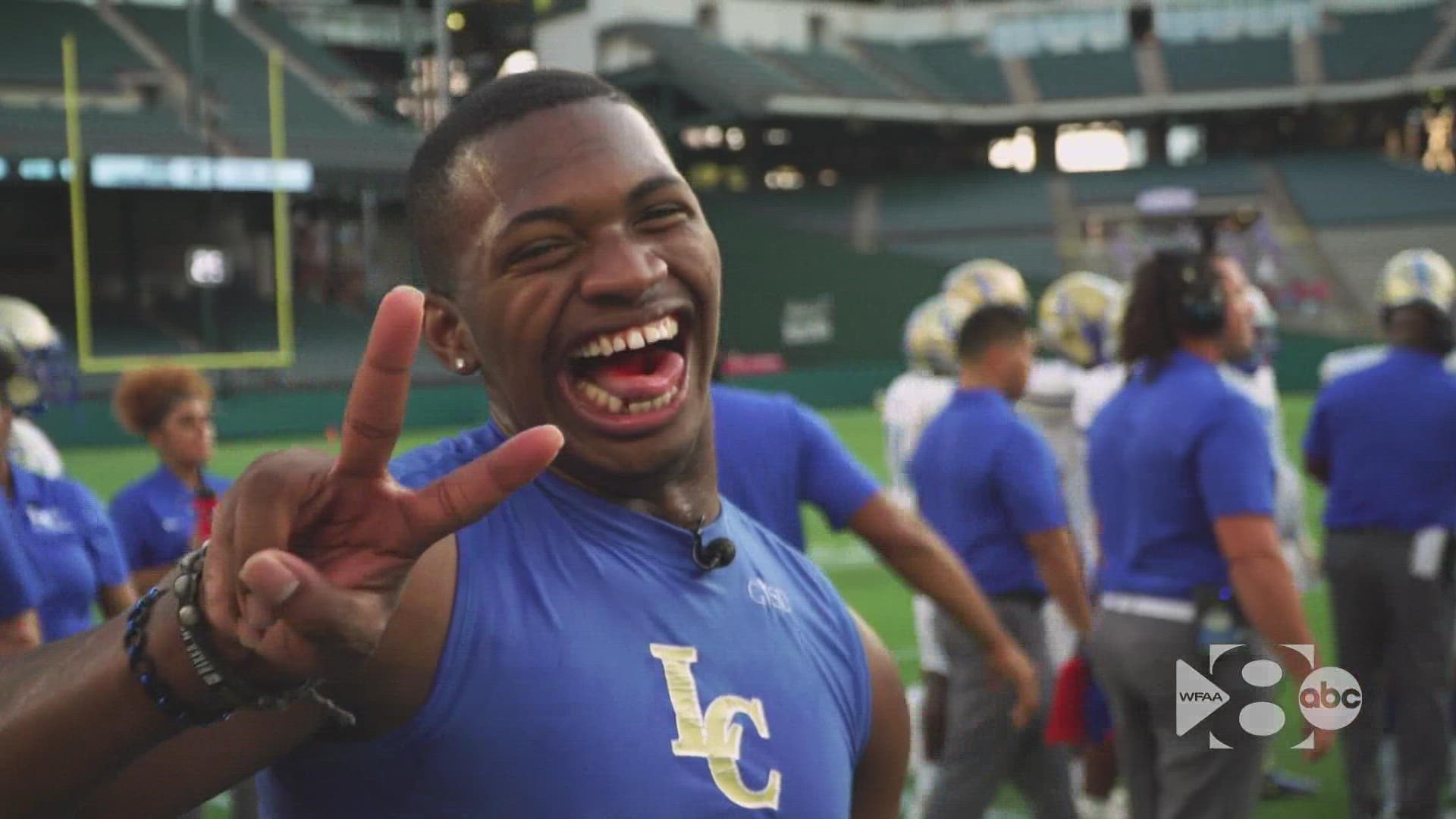 "It’s hard to find somebody that doesn’t like him, right? And that’s what makes him special," expressed Lakeview Centennial Head Football Coach Anthony Saincillaire.

It's not hyperbole to say Curtis is one of the most popular kids in school.

From football to band, he dances and smiles with anyone and everyone.

"He provides that spark no matter what," added Saincillaire.

After a breakout sophomore season in 2019, Curtis was a rising star for the Lakeview Centennial Patriots and the eventual heir to the throne of team captain.

Curtis had visions of playing college football and was talented enough to earn a scholarship. He was a young man on top of the world, and football was his crown jewel.

That was until late one night in July 2020, when a mother awoke to a real-life nightmare.

"I remember like it was today," Houston recalled, wiping tears. "I woke up to a phone call early, early in the morning.”

There was an accident off U.S. 80 in Mesquite by the Lawson Road exit.

A car with four teenage boys hit the back of an 18-wheeler, spinning them into a barrier as they were hit by another truck.

Curtis was in the backseat.

When Houston arrived at the hospital she said, "Jaquon was on life support. He had facial fractures. He had bruised lung and kidneys.”

Due to the COVID-19 protocols at the time, she had to watch through a door as her youngest son fought for his life.

"Honestly, Jonah, it messed with my mental and my emotions were all over the place," Houston said. "This is my baby. This can’t be real.”

The three other passengers suffered some minor injuries, but nothing as severe as Curtis. He sustained a traumatic brain injury.

"[The doctors] said, 'It’s not looking good. We feel like he’s not going to make it, so we recommend comfort care,' meaning just to get him off these machines and basically let him go," recounted Houston.

Comfort care is all the doctors could suggest since the brain damage was inoperable.

There, Curtis laid for days and weeks in a vegetative state, hooked up to a ventilator.

"[The doctor] came at me with all these medical terms that I didn’t understand and my exact question was, ‘Doctor, are you telling me I’m losing my son?” Houston recalled. "And he said, 'Yes, I’m sorry but he’s not going to make it."

Houston chose to wait and to keep her son on life support.

"He’s a testimony to be told," she said.

The brothers and best friends share a secret handshake and embrace each other in the living room in an apartment in Garland.

"I think it’s nothing short of a miracle," Houston asserted.

Doctors did not expect for Curtis to live, much less walk. He now strides to midfield every Friday night to serve as honorary team captain.

"Every game," one of his closet friends and teammates, Zechariah Dunston said. "Every game we play is for #19.”

"This is the part that hurts the most," Houston admitted, while watching Lakeview Centennial's season opener at Choctaw Stadium in Arlington, Tex.

"Because these are the days we looked forward to play in these big stadiums and big lights," she said.

Number 19 never got to play his junior or senior year. There will be no scholarship to play football.

"I just told him, 'You gotta [sic] stay strong. There’s more to life than football. You just gotta [sic] find what you wanna do,'” JaScha advised his younger bro.

Curtis is looking at community colleges for next year with hopes of a career in physical therapy, so he can help people the way he's been helped.

For nearly 15 months, he has been in and out of therapy sessions multiple times a week.

His progress the first few months was nothing short of miraculous. Unfortunately, the doctors don't believe his current condition will improve dramatically from where it is now.

"The toughest thing is, he’s one of those kids that can change lives," Saincillaire said. "Not just by playing football but the type of person he is.”

Curtis still has his memory and cognitive function. He can hear and understand when you speak to him, but his speaking ability is still hindered.

He mostly communicates through text messages, but he knows a great deal of sign language too, because he has a deaf cousin he grew up with.

While his verbal skills remain the biggest roadblock, they haven’t stopped him from holding court.

So, it should come as no surprise, "Prince Charming" has a new crown: Homecoming King.

Monday Night Football is coming to your home for news, weather, and sports. Join WFAA as our teams give you all the pre-and post-game coverage throughout the day: from Daybreak, right through WFAA News at 10 - all from AT&T Stadium, the home of the Cowboys.