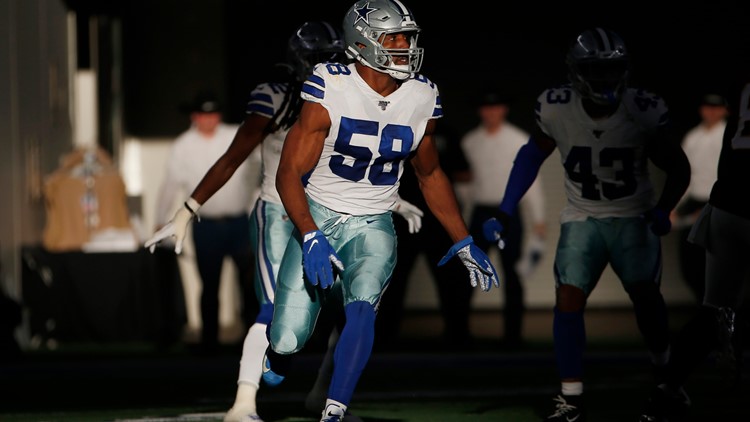 Photo by: AP
Dallas Cowboys defensive end Robert Quinn (58) during the first half of an NFL football game against the Washington Redskins in Arlington, Texas, Sunday, Dec. 15, 2019. (AP Photo/Ron Jenkins)

As the Dallas Cowboys inch ever closer to free agency, and with the NFL Draft in late April, there are a multitude of holes that the team will need to address.

The top two priorities will be locking up quarterback Dak Prescott and wide receiver Amari Cooper for at least the 2020 season. The team has the transition tag and franchise tag that they can play with to make sure those two are Dallas Cowboys for the upcoming season.

One big area of emphasis that will crop up is who will be lining up opposite of DeMarcus Lawrence to rush the passer? There will be no Taco Charlton as an up-and-coming option as he was released early in 2019. Maybe Randy Gregory will be reinstated but the Cowboys can never count on that. There is the possibility that the Cowboys could look to the draft to fill the need.

Dallas has the 17th overall selection in the upcoming draft and could take Louisiana State’s K’Lavon Chaisson to rush from the weakside of the defense. Chaisson is an outstanding athlete who can create disruption on the left of the offensive line which is exactly the kind of talent you want to put with Tank Lawrence on the opposite side.

Chaisson is viewed as one of the top edge rushers once you get past Ohio State’s Chase Young or Iowa’s A.J. Epenesa. Those two will likely be gone within the first 10 picks of the draft. Chaisson is therefore on the top of the next tier of pass rushers. Later in the draft, the Cowboys could target Bradlee Anae out of Utah. Anae is very good at playing the run and getting after the quarterback. He is an edge setter that doesn’t let much get by him.

Of course, the internal candidate elephant in the room is Robert Quinn. After being traded to the Cowboys from Miami, Quinn proceeded to be the Cowboys’ best pass rusher in 2019 as he showed a relentless ability to get to the quarterback.

Quinn’s 11.5 sacks were the most for the nine year veteran since the 2014 season where he accumulated 19 for the Rams. The 2019 season seemed to have rejuvenated his career and the Cowboys should be very motivated to bring him back in 2020.

History suggests that a mid-to-late first-round selection won’t provide you with the type of season that Quinn just accomplished, at least not in their first season, so the 14th overall pick of the 2001 draft should be the first option. The Cowboys likely still need to find edge help in the draft regardless, with an eye towards the future as Quinn will be 30 next season.

At times it felt like Quinn was a game-wrecker with his 13 tackles for loss, the second most of his career and he also contributed two forced fumbles. With new defensive line coach Jim Tomsula, Quinn should be in line to improve those numbers in 2020.

The question becomes, will that come in Dallas? The statline was mighty impressive considering Quinn missed the first two games of the season and he still led the team in many of the types of plays that win football games.

Do you think the Cowboys should keep Robert Quinn or do they have more pressing needs? Share your thoughts with Patrick on Twitter @PatSportsGuy.