COMMENTARY: Here is the Texas Longhorns' toughest job on the football team. 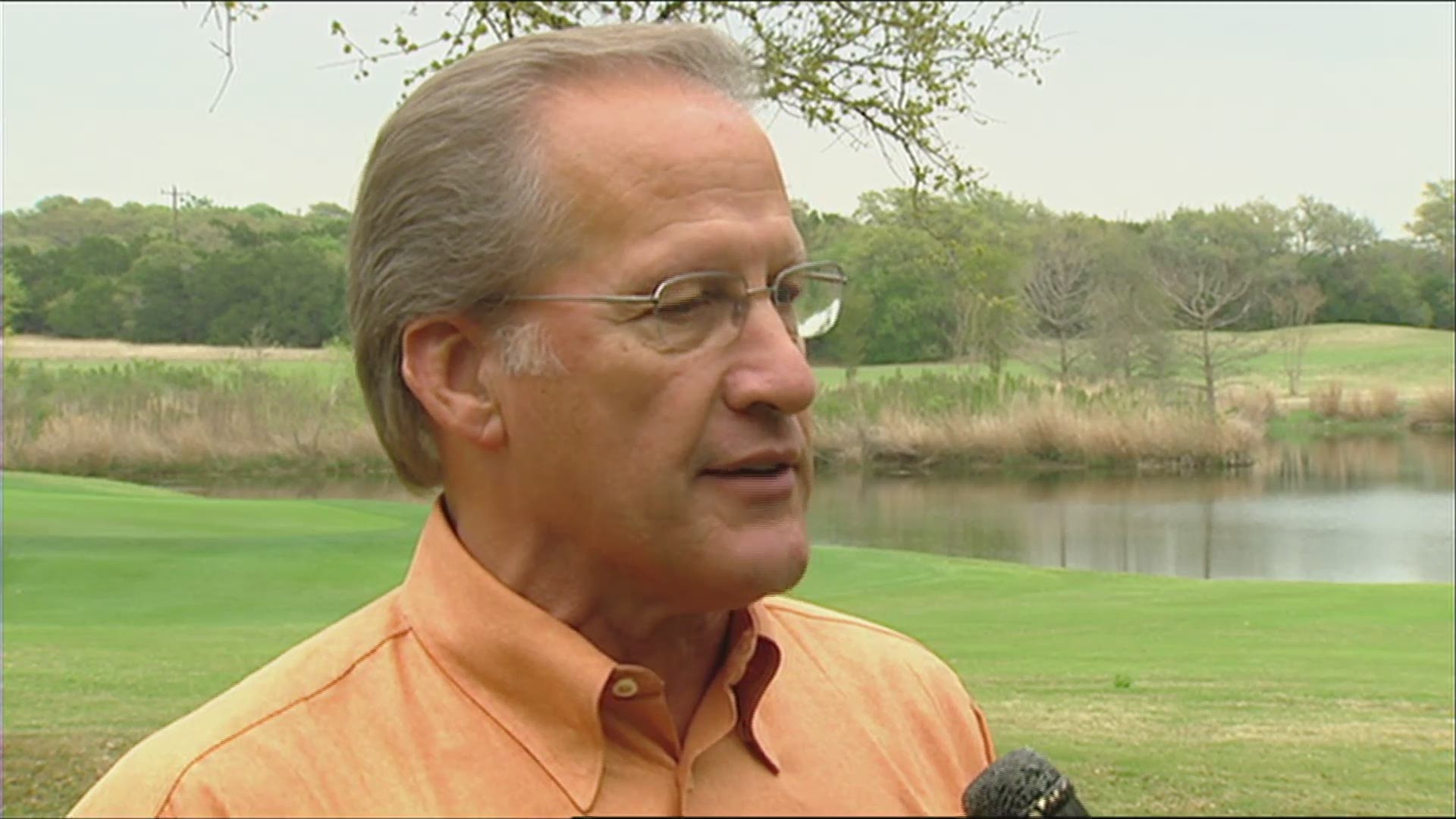 AUSTIN, Texas -- It’s the campus where the old saying is: the most popular person is the backup quarterback.

The University of Texas has a great history of quarterbacks. But in the last 50 years, the quarterback controversies often get more headlines than the great performances.

By my count, there have been 37 starting quarterbacks for Texas since the start of the 1968 season. I’ve interviewed 32 of those 37 through the years, and they’ve all been involved in some quarterback questions.

Remember 2003 when the season started with Chance Mock and then Vince Young took over in mid-season?

What about in 2006 when Colt McCoy and Jevan Snead battled for the starting job? McCoy won and Snead left before the season was over.

Questions often lead to changes. One of the biggest changes came in 1968. Texas switched to the "wishbone formation" after a couple of disappointing seasons and senior starting quarterback Bill Bradley was having trouble.

“Being the first guy in the wishbone, [I] didn’t operate it very well to be honest with you,” Bradley told KVUE. “They made some changes and I was one of them they made changes with.”

The change was the late James Street. Two weeks into the 1968 season, coach Darrell Royal made a move at quarterback.

“Bill is a great athlete. He was probably my biggest supporter,” Street said in an interview in 2008. “Monday, we go out and they announce it that I’m moving in and playing quarterback. They put [Bill Bradley] out at split end. We’re running patterns, throwing the balls to him. He unties his sweatpants so that when he runs down across the middle his pants fall down. It broke everybody up.”

It's a scene that was included in the movie “My All American” in 2015. Bradley remembers it fondly.

“Every news media outlet, including Time, Newsweek, Sports Illustrated and all the locals from Dallas and Fort Worth wanted to see the reaction from the team,” says Bradley. “I talked to James and we were doing some jogging routes with little skinny posts. I said no matter what I do, throw the ball where I could catch it. James was my best friend. He did and I had undone the sweats. As I caught the ball and was on the ground, I looked back and saw Coach Royal drop down and throw his clipboard on the ground. I thought ‘Oh my God, what’s going to happen now” and he was laughing his rear end off.”

Having support of the other quarterbacks seems to be a key to college football success and it helped Texas in 1968.

“Every game after that, Bill would talk to the team because he’s one of the captains and he’d say old Street, he’d call me the Rat, he’d say the Rat’s going to get it done for us today. We’re going to win the ballgame. We gotta support him. We gotta play hard. [Bill Bradley] automatically gave me 100% of his support. All the people on the team knew what kind of athlete, what kind of player, what kind of quarterback he was. There was no division on the team. A lot of times if you change quarterback, there are some people who think… but Bradley took all that away.”

James Street won the rest of the games in 1968 and gave a lot of credit to Bradley.

“Bradley and I both supported each other. We’d come off the field and I’d say watch this guy, I think this. We were a team. The ’68 team was a heck of a football team by the end of the year.”

Street went on to win every game in 1969, including a National Championship. He was undefeated as a starting quarterback at Texas.

“He was the best quarterback ever because he never lost a game,” says Eddie Phillips, who replaced Street as UT's quarterback in 1970. “If I could just come up and play and validate that I was a leader and follow James, my job was good.”

Phillips did a good job... good enough to be perfect in the regular season and win another National Title.

Then, there was some quarterback stability in the early 70s: from Phillips to Donnie Wigginton to Alan Lowry to Marty Akins. A few games missed because of injury.

But from 1976 to 1983, there was a revolving door at quarterback -- with injuries helping cause most of the changes -- and that had lots of quarterbacks on the roster.

“Those five were all in the cumulation at some point in time," McIvor said. "Somebody didn’t know who was going to start. I can tell you that. That happened a lot. We weren’t selfish. We were here to win a ballgame.”

McIvor was the starting quarterback at the beginning of 1981, but got hurt against Houston. McIvor's injury put Robert Brewer in the game, who remained the starter for the rest of the season.

“Most of the guys that end up playing quarterback, they look at it as an opportunity," Brewer told KVUE. "They’re just trying to get on the field and make something good happen. Pressure is sitting there on the bench. The fun is getting on the field. I never felt the pressure other than to do for your teammates It’s a blast, not pressure.”

Brewer held on to the starting job until the bowl game in 1982, when he got hurt before leaving for El Paso.

“I can remember Robert breaking his hand the day we were leaving,” said Dodge. “He broke his thumb on a helmet. And so I go from carrying a clipboard, being his caddy, to having a press conference when we get there at the airport.”

Dodge was involved with lots of quarterback changes during his tenure at Texas. Changes that in today’s world could often lead to players transferring. But that wasn’t the case back then.

“I’m so glad I-AA football, you didn’t have the opportunity to transfer and be immediately eligible, was around in our time,” said Dodge. “I had people kind of talking to me after year one or two. It was never anything I would have considered. I love the University of Texas. I think a lot of times if I had transferred where my life would have gone, where my career would have gone. I never would’ve had those great experiences at UT. Both the great experiences and I think sometimes adversity molds who you are in life. I think the Lord all the time for the adversity he put on me.”

Instead of transferring, Dodge stayed and competed with McIvor and Rob Moerschel for playing time in 1983, and then started every game in 1984. But in 1985, the quarterback room was overflowing with talent.

Bobby Lilljedahl was a blue-chip quarterback recruit in 1985 and remembers the competition well.

“You had Todd (Dodge) and Bret (Stafford) and Shannon (Kelley) and Donovan (Forbes). Doug (Hadley), Rob (McManis), Danny (Akers)," Lilljedahl said. "We had a great core there and it was a good tight group. Everybody supported each other. I don’t know that you thought ‘I’m not going to go there because of all those guys'. I want to put myself up against the competition.”

Lilljedahl never played quarterback in a game at Texas. He eventually moved first to wide receiver and then to full-time punter. But Lilljedahl said that it wasn’t just that Texas had so many quarterbacks, rather it was that they were all so different.

“Everybody had a different skill set," Lilljedahl said. "I was the bigger guy, probably not going to be as quick. Donovan was a multi-threat. And Shannon was as well. Doug was a thrower like myself. Todd was a little scatback, throwing the ball around. Bret had the grit. It was a good transition for him coming in after Todd. It was a pretty diverse group.”

Bret Stafford wound up winning the quarterback competition in 1985 and held on to the job into 1986 and most of 1987. Stafford is still a little disappointed in being 19-15 as a starter.

“The years I was there, we were close. Had some great players, had great fun, had good talent. We never accomplished some of the goals we wanted to have,” Stafford said.

When Stafford left UT, Mark Murdock got his chance to start, but didn’t have lots of success.

“It’s not easy,” Murdock told KVUE. “I look back on it with fond memories. No regrets. You just came here, you laid it all on the line. There were good days and there were rough days.”

Murdock was involved in a three-quarterback situation in 1989 with Peter Gardere and Donovan Forbes, but despite wins over Oklahoma and Arkansas, the results weren’t great. The Longhorns were better with Gardere as the full-time starter in 1990, but returned back to mediocrity in 1991 and 1992.

And just because there was a regular starter didn’t mean there was no controversy. Some Longhorn fans wanted Jimmy Saxton at quarterback instead of Gardere in 1991, similar to ones who wanted Mike Phillips under center instead of Marty Akins in 1974.

Shea Morenz took over as the starter in 1993 with mixed success.

“Strangely I never felt pressure. I always felt I had an opportunity,” Morenz said. “I guess when you’re 18 to 21 years old, you don’t think about it that much. I felt like the luckiest guy in the world.”

But Morenz's luck ran out in 1994 when he got injured, which gave backup quarterback James Brown a chance.

“I was just happy to play,” Brown told KVUE in a 2012 interview. “It was no problem at all. Shea has always been a good friend. It was just an opportunity to play.”

Morenz remembers those days fondly, even though he lost playing time to Brown.

“If you’re going to be a quarterback at a big university, you have to expect those things," Morenz said. "It’s not fun to be booed and it’s not fun to be the guy who is second string and not playing.”

Brown took over and led Texas to a Sun Bowl win.

“There’s a competition line and you don’t cross it but you have to stay friends for the team,” Morenz said.

Morenz left the football program and concentrated on baseball.

Then, when Brown left after the 1997 season, it opened the door for Major Applewhite. First, Applewhite had to battle Greg Cicero for the backup job to begin 1998. After Richard Walton got hurt against UCLA, it was a major opportunity for Applewhite.

Applewhite held the starting job for most of the next two seasons, but was involved in the famed quarterback controversy with Chris Simms.

“There’s always nerves,” Applewhite told KVUE. “I have a hard time brushing my teeth on game day without gagging.”

Even after losing the starting job to Simms, Applewhite stayed on the team and started his last game, a bowl game win in San Diego.

But more and more players decided to leave the program when they didn’t win the starting job. Cicero transferred to Baylor in 1999. Jevan Snead went to Ole Miss, GJ Kinne transferred to Tulsa, Connor Wood left UT for Colorado, Garrett Gilbert moved to the Dallas-area for SMU, Connor Brewer left for Arizona, and Kai Locksley made the trek to UTEP. The days of staying and competing with a full room of quarterbacks seems to be over.

Veterans Shane Buechele and Sam Ehlinger return for the Longhorns as incoming freshmen Cameron Rising and Casey Thompson step on campus. Sounds similar to 2011, when the new Longhorn Network had a promo with four quarterbacks -- Garrett Gilbert, David Ash, Case McCoy, and Connor Wood -- asking who should be the starter. Three of the four wound up starting games that season and two transferred.

It’s hard to find stability at the quarterback position these days, especially at Texas.

It’s not an easy job for anyone.