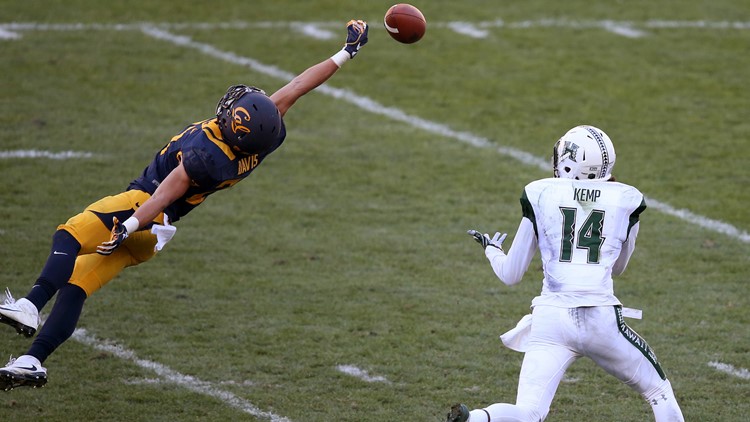 Photo by: AP
California Golden Bears' Ashtyn Davis, left, deflects a pass meant for Hawaii Rainbow Warriors' Marcus Kemp during the opening game of the U.S. college football season at Sydney's Olympic stadium in Sydney, Saturday, Aug. 27, 2016. The last American football of any kind played in Sydney was an NFL preseason game at the Olympic stadium that attracted 73,000 spectators in 1999. (AP Photo/Rick Rycroft)

The position of safety has been a hot button issue for the Dallas Cowboys pretty much ever since Darren Woodson retired from the game of football in 2004. Prior to his retirement, the Cowboys added Roy Williams out of Oklahoma with the eighth pick in the 2002 NFL Draft as they looked to extend the legacy of one of the team’s strengths at the time.

After Woodson retired, however, the Cowboys seemed to make the position a low priority. Williams left after the 2008 season and it’s worth mentioning that Dallas hasn’t selected a safety in the first two rounds since Williams’ selection.

With the Super Bowl almost here, NFL Draft season will ramp up in earnest in the coming weeks ahead of April’s ceremony. With that in mind, one safety in particular should be of interest to the Dallas Cowboys with California’s Ashtyn Davis looking to show throughout the process that game-changing talent can still be had at safety.

As the number one rated senior safety prospect on many boards, Davis is an athletic guy who will likely jump up the overall charts in the coming weeks.

The Cowboys have been one of the worst teams in the league at getting turnovers via interceptions for several years now. Since the beginning of the 2014 season, Dallas is dead last in interceptions (61). The New England Patriots and Buffalo Bills are first with 96. Those AFC East teams average six more interceptions per season which can prove to be the difference between a win or a loss in a couple of games per year.

With a lack of ability to produce takeaways on the current roster, the team needs to find a guy who can be a ball hawk. Davis profiles as that kind of talent. He has the ability to take the ball out of the air, as evident by the game against UCLA when he was able to show great reflexes to create a turnover via a spectacular diving catch.

Davis has the range to play single high safety and the speed to track down plays when needed. One aspect that will assist him at the next level is the fact that he also spent some time at cornerback for Cal which should allow him to feel comfortable when asked to play man coverage. He can take on a tight end or running back coming out of the backfield and not suffer a drop off.

Davis is a player who accelerates to the ball with his speed as a Pac-12 track and field champion in the hurdles. He can get to a spot to make a play or use his speed when chasing down ball carriers in open space. It is one thing to have good speed on the backend but his ability to process what is in front of him makes him an intriguing prospect.

Davis charging forward downhill is a joy to watch as his click and close ability limits yards once ball carriers get to the second and third levels of the defense.

Davis projects as a day two player who could be right in the wheelhouse for Dallas when they get on the clock with pick 51 in the second round.

Do you think the Cowboys should finally address the safety position with an early-round pick in 2020? Share your thoughts with Patrick on Twitter @DraftCowboys.