For the long-term success of SMU football, all roads lead to home. 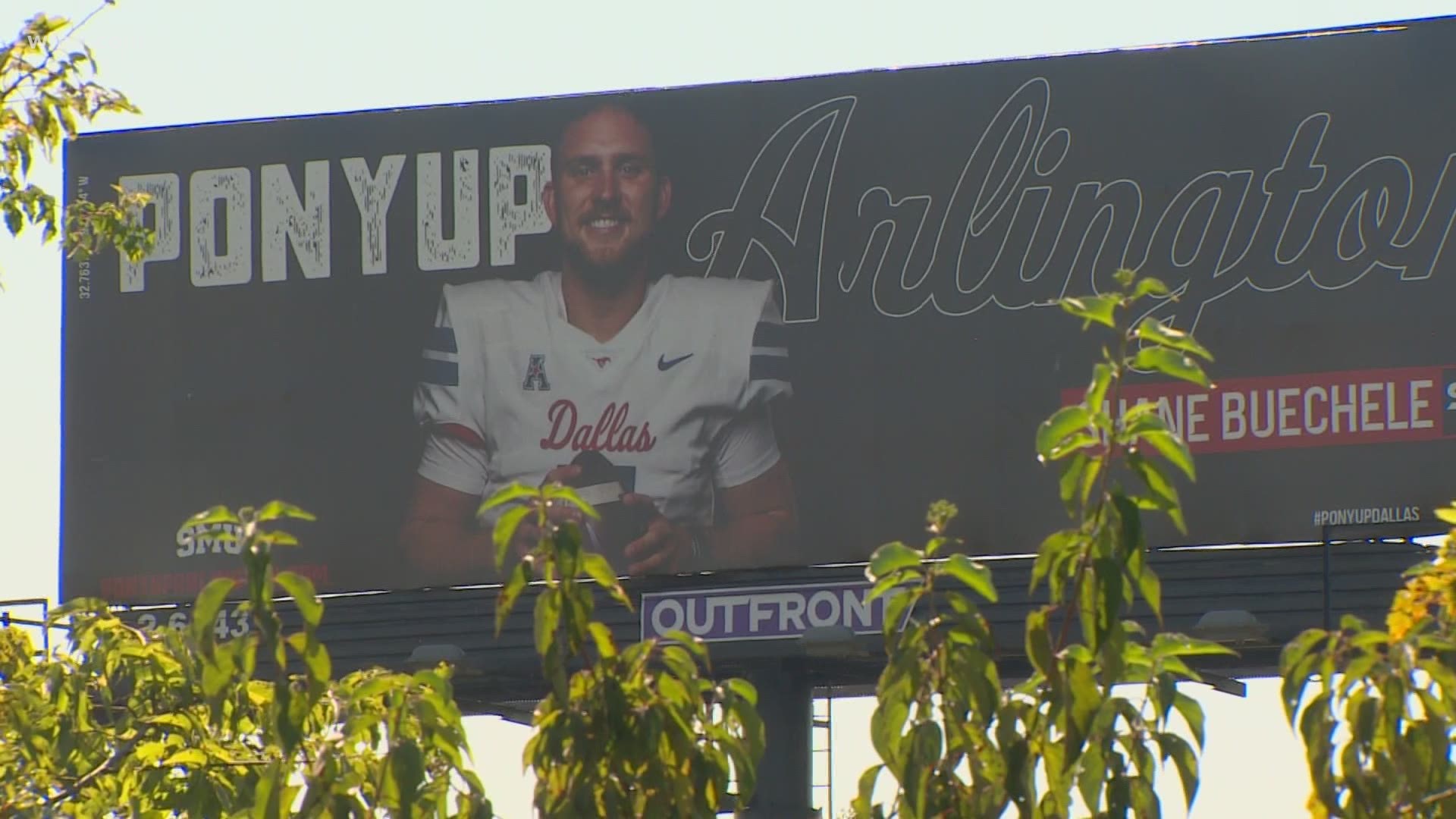 ARLINGTON, Texas — Southern Methodist University football is back on the map- in more ways than one.

The Mustangs have kicked off year two of their "Born & Raised" marketing campaign, which features more than half a dozen SMU players from D-FW on billboards around the metroplex.

"This is actually the first time I've seen it up close," said SMU quarterback Shane Buechele, as he stood on a dirt path nestled behind some trees off Interstate 30 in Arlington, squinting through the sun in order to get a safe look at his new billboard location. "I think my mom likes it the most."

Shane is accompanied by his mother, Nancy, and his father, Steve, who is a former player, coach and executive for the Texas Rangers.

After three years with the Texas Longhorns, the Arlington native and former Lamar High School star transferred to SMU in 2019.

In his first year as the Mustangs starting quarterback, he passed for nearly 4,000 yards and 34 touchdowns.

Buechele is now a redshirt senior and one of the top collegiate quarterbacks in the country.

Through SMU"s first four games, he's second in the nation in passing yards (1,326) and fifth in passing touchdowns (10).

After going off for 474 yards and three touchdowns vs. No. 25 Memphis on Oct. 3, Buechele was named the Davey O'Brien National QB of the Week -- an honor bestowed to the best quarterback performance of the week.

"You don't have to go away to be at a great school playing the game that you love," Shane explained. "You can come right to Dallas. You can stay close to home."

That's the SMU sales pitch and marketing tactic for recruits. And, it's a good one.

"There's a sense of pride playing for your city and our players are starting to embrace that," admitted SMU head coach Sonny Dykes.

The SMU billboards came to fruition in Summer 2019 -- an idea created and executed by Dykes and the SMU athletics department -- as a way to honor their homegrown talent from Dallas-Fort Worth.

In 2020, there are billboard locations in:

"I know they enjoy their family driving through the neighborhood all the time and seeing a billboard of them on it," Dykes said. "I certainly think it helps with recruiting."

Dykes is in his third year as the Mustangs head coach and he knows the importance of recruiting in Dallas-Fort Worth, after starting his coaching career in the 1990s at Pearce High School followed by Navarro College.

"Just the talent in the metroplex, if you just recruited the top kids year-in-year-out in Dallas, you'd have a very very successful [college] football program," Dykes asserted.

And if Dykes can successfully establish a recruiting pipeline from D-FW high schools to SMU -- something Dykes thought was lacking before his arrival -- the Mustangs will be a force to reckon with for many years to come.

"To have SMU has the highest-ranked football team in the state of Texas is pretty neat," smiled Steve Buechele.

Ranked 17th in the AP Poll, SMU Football is back on the map.

And all roads lead to home.