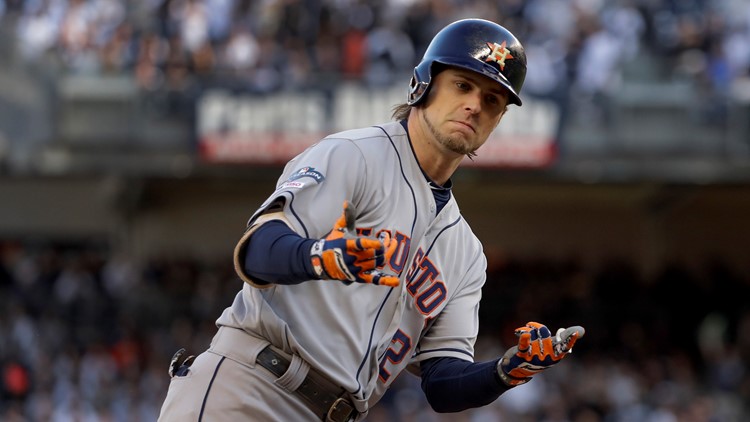 It's a rallying cry that echoes throughout Minute Maid Park (and opposing stadiums) whenever Josh Reddick comes up to bat. Sometimes it can even be heard when he's playing in the outfield.

Reddick, 32, was born William Joshua Reddick in Savannah, Georgia. He was cut from his middle school team twice and made a position change in high school before playing for a community college, where he hit .461 as a freshman.

Here are five things to know about Reddick:

Reddick is an avid wrestling fan.

He has consistently busted out championship wrestling belts during his team's celebrations over the years and his walkup music is Ric Flair yelling "Woooo!"

Check out this video of him greeting Flair before the wrestler threw out the first pitch at an Astros game earlier this season.

Reddick married Georgette Elkins on Jan. 21. The couple announced their pregnancy on April 21 and on Oct. 2 they welcomed twin boys Maverick Joshua and Ryder Blaze.

Reddick was the star of the celebration when the Astros clinched the Americal League West division title in 2017 when he busted out an American flag Speedo in the midst of the beer-and-champagne shower going on inside the Astros' locker room.

This season, Reddick has decided to don a Goku from Dragon Ball Z outfit during the team's locker room celebrations.

How did we get him?

Reddick was a free agent and was coming off a season in which he and pitcher Rich Hill were traded from the Oakland Athletics to the Los Angeles Dodgers for Grant Holmes, Jharel Cotton and Frankie Montas.

Reddick played 47 games for the Dodgers before becoming a free agent.

Reddick struggled a bit in the 2017 Fall Classic, but we all know it didn't matter in the end when the Astros beat the Dodgers in the seven-game series.

He collected four hits in the first three games of the series before going hitless in the final four games.

He started every game and played stellar right field for Houston. While he didn't record an assist, he took care of all 14 opportunities he had in the outfield that postseason.