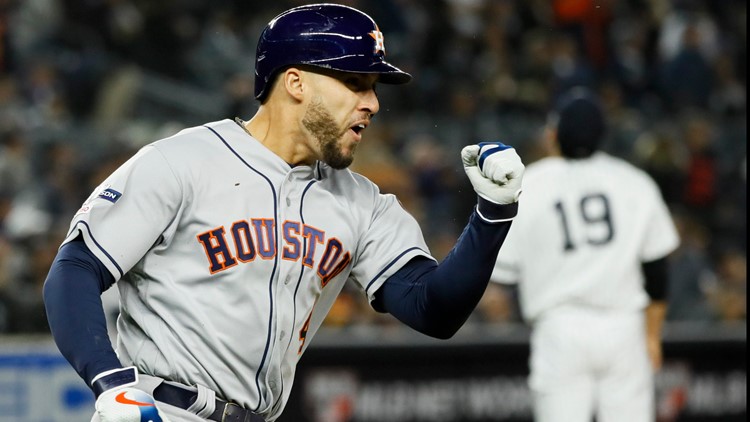 HOUSTON — George Springer is the catalyst of the Astros' offense, hitting leadoff and sparking the lineup.

Springer is a homegrown talent, drafted by the Astros in the first round eight years ago.

Here are five facts about Springer:

Destined for the diamond

George Chelston Springer III, 30, was destined to be a ballplayer. His grandfather, who emigrated from Panama as a teenager, was a pitcher for Teachers College of Connecticut. George Springer Sr. dreamed of playing in the Major Leagues and passed along his love of baseball to his son.

The younger Springer grew into the sport. Literally. He was a scrawny 5’2, 100-pound freshman when made the varsity baseball team at New Britain High School in Connecticut. By the time the Astros drafted the future All-Star, he was 6’3.

All in the family

The guys weren’t the only talented athletes in the Springer family. George’s mom Laura was a top-level gymnast who competed for the University of Connecticut Huskies.

Springer’s wife, Charlise Castro, is also an athlete. She played softball at the University of Albany and is now a personal trainer. The couple married on January 20, 2018.

Springer is the national spokesperson for The Stuttering Association for the Young.

Springer has a stutter and is outspoken about it. He said he dealt with minimal taunting as a child because he grew up with a group of supportive friends.

He said he has learned to deal with his stutter and now wants to do whatever he can to help others who deal with it.

Made for the big moments

Springer made his MLB debut on April 16, 2014. He hit second and played right field against the Kansas City Royals at Minute Maid Park.

He singled off Jeremy Guthrie in his second career at-bat.

After striking out four times in his four at-bats in Game 1 of the 2017 World Series, Springer erupted with 11 hits, including five homers, over the rest of the series. He was named the World Series Most Valuable Player after the Astros beat the Dodgers in seven games.

Before his Game 1 struggles, Springer hit .115 in a seven-game American League Championship Series win over the Yankees in 2017.

The struggles led to lineup questions for Astros manager A.J. Hinch. Here's what he said when reporters asked if he would alter his lineup: "George Springer has way more good days than bad days, and way more good stretches than bad stretches," Hinch said before Game 2 of the World Series. "So I'm going to continue to encourage him. He's going to lead off. He's going to be a big part of an offensive approach tonight against a good pitcher."

The rest is history.

Springer and the Astros avoided arbitration in 2018 by agreeing on a two-year $24 million contract.

His contract is almost up again so the Astros will have to decide whether to come up with the cash to extend it again. Otherwise, Springer will be a free agent in 2020.

"I love it here," Springer said during Spring Training. "This is a good spot for me, and we'll have to see what the future brings."