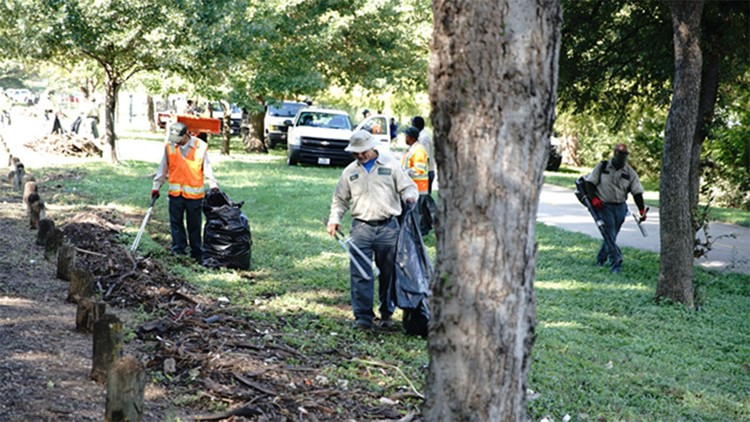 DALLAS — At White Rock Lake, Dallas taxpayers fork out millions to clean up the trash that washes down from Plano and Frisco.

“That’s exactly what it is,” said Gary Spence, of the Texas Stream Team.

After the recent heavy rains, joggers running around the lake were treated to plastic bottles, Styrofoam chunks, couch cushions, spray cans and tons of other debris carried down White Rock Creek from Plano and Frisco.

Several times a year, Spence’s crew of volunteers fans out around White Rock to take water samples to gauge how polluted the lake is. They use chemical kits to do their measurements, but the solid junk is easy to see with the naked eye.

“At some places in White Rock Creek [upstream from the lake], there is so much plastic junk you can almost walk across it,” Spence said. “Our friends to the north aren’t very tidy.”

The bathtub ring extended hundreds of feet from the shore.
Byron Harris / WFAA

When the mess comes ashore at White Rock Lake, the city of Dallas cleans much of it up. After the most recent rains, Park and Maintenance Operations had more than 25 workers working overtime to remove the bathtub ring of rubbish that stretched nearly nine miles around the lake’s circumference. They filled 10 dump trucks.

The city gets some help from the public. At least once a month, volunteers from For the Love of the Lake donate a Saturday to cleaning up White Rock’s shores. Some of what they collect is litter. Much is detritus from the northern suburbs, and FLOTL president Charlotte Wolf says the problem is getting worse.

People below the White Rock spillway at the end of the lake feel it, too. While news helicopters and spectators flock to see water rushing over the dam when it rains hard, homeowners whose property skirts White Rock Creek below the spillway see something else when the waters recede. Mounds of plastic bottles. Although they say the city has become more responsive to carting off the junk in recent years, they look out their windows and see garbage.

“It’s the worst it’s ever been,” said resident Phil Wuertz.

FLOTL has a “Garbage Museum" of some of the more unique trash that’s been picked up from the shoreline. The exhibits include a bowling pin, a toilet seat, a fire extinguisher and a few rubber ducks. Ironically, the collection also includes a bass fishing trophy. Ironic, because it’s increasingly difficult for bass to survive in the lake.

"All creatures need 3.0 dissolved oxygen to survive,” he said.

Just as bad for a lake that used to provide Dallas’ drinking water is White Rock’s E. coli level. E. Coli is the fecal coliform pollutant that can make people sick. Any level of more than 100 units per milliliter of water is considered unsafe for recreation. Parts of White Rock regularly clock in at 300 to 400, even 1,000 according to Spence.

Dallas' most prominent water feature hasn’t been dredged since 1998, according to the city. Still, on any given day one may see SMU’s rowing team and kayakers paddling through Plano’s effluvium.

“They just ignore it,” Spence said.