Aretha Franklin, Stephen Hawking, George H.W. Bush and other luminaries passed away in 2018. 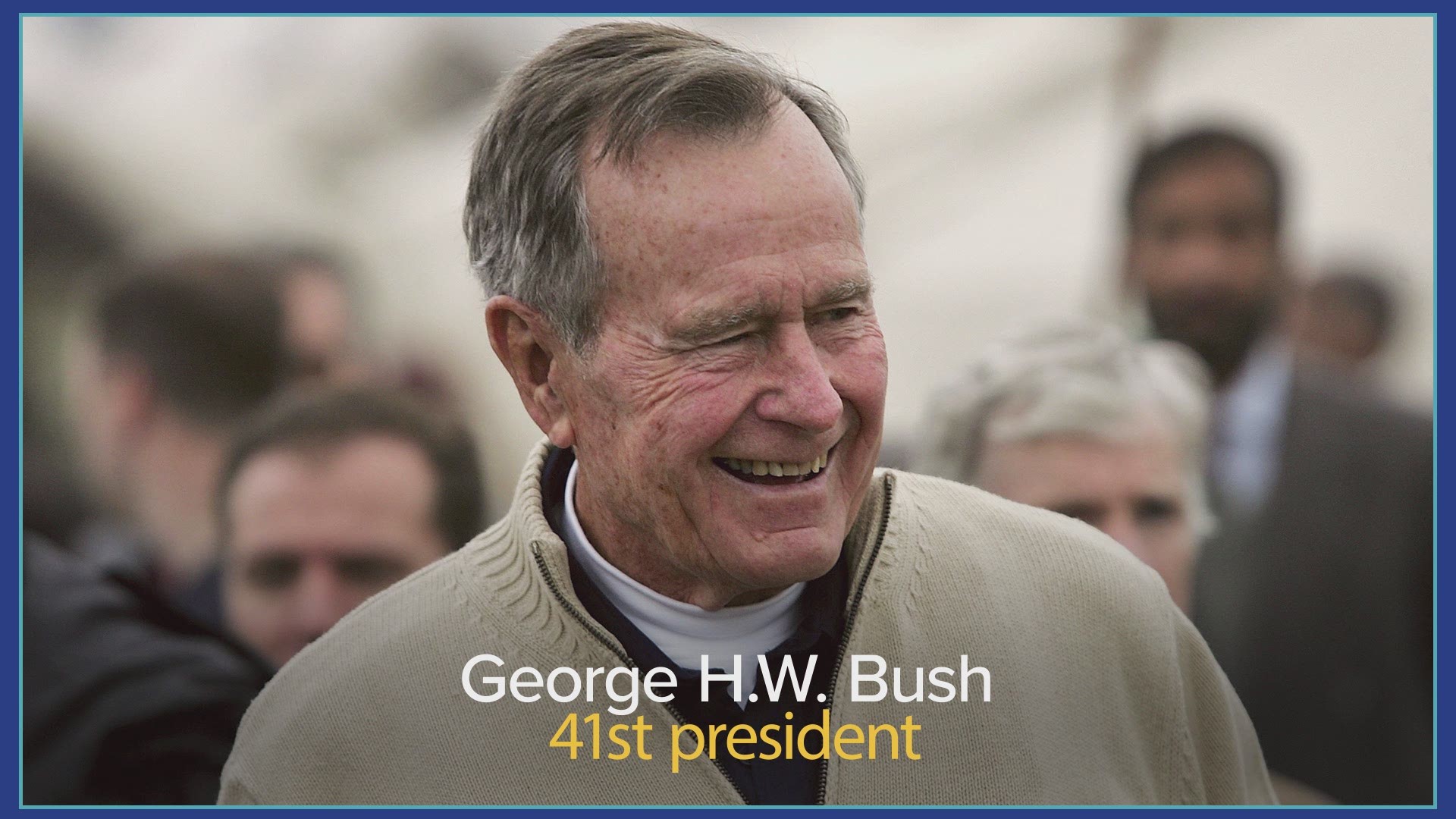 Every death leaves an echo, a memory, a ledger of glories, regrets and sometimes, if the life is lived well enough, lessons for what is to come. The future, after all, has many architects, and they don’t always agree.

Especially when it comes to matters of faith.

Among the most prominent deaths of 2018 was evangelist Billy Graham, the pulpit-shaking preacher from North Carolina who died in February at the age of 99. Graham’s more than 400 Crusades carried his unshakable Gospel “to the ends of the earth,” reaching an estimated 2 billion people. “My home is in Heaven,” he said. “I’m just traveling through this world.”

Graham’s faith was unyielding. “The Bible is not a book of science. I accept the Creation story. I believe God did create the universe.”

But wheelchair-bound physicist Stephen Hawking, who succumbed to Lou Gehrig’s disease at the age of 76 in March, worshipped numbers instead. Paralyzed and speaking with a computer-assisted accent long before Siri or Alexa, Hawking insisted his calculations proved the universe might have simply appeared from nothingness, with no need for a god to balance the equation. “Science,’’ Hawking said, “has a more compelling explanation than a divine creator.”

Those confused could always turn to another architect, Detroit’s Queen of Soul Aretha Franklin, who died in August from cancer at 76, to take them to a joyful church every time she took the stage. “You better think,’’ she sang, “think about what you’re trying to do to me. Yeah, think, think, think, let your mind go, let yourself be free.”

Whether in music, thoughts or prayer, many such world-builders left us in 2018, each carving new paths for their families, professions or the world. And because of extended lifespans, the deaths brought back histories well beyond the recall of the youngest today.

Just this month, five days of remembrances retold the story of George H.W. Bush, 94, the World War II hero and Cold War president who saw the Berlin Wall fall, stared down a Middle East dictator and spent his final decades jumping out of airplanes just for the thrill of it. His wife of 73 years, Barbara, 92, who died in Houston eight months earlier, spent a lifetime of summers presiding over a brood of Bush politicians on the chilly coast of Maine.

The funeral of another war hero and presidential hopeful, John McCain, 81, recalled his imprisonment in North Vietnam and a legacy of political courage that often defied party lines. Others on the world stage were former U.N. secretary-general Kofi Annan, 80, and South African activist Winnie Mandela, 81, their fights for tolerance still not done.

The entertainment world lost stars such as Penny Marshall, 75, co-star of "Laverne & Shirley" and one of the top-grossing female directors in Hollywood with such cherished hits as "Big" and "A League of Their Own."

Credit: Mike Windle/Getty Images for SXSW
Actor Burt Reynolds attends the screening of 'The Bandit' during the 2016 SXSW Music, Film + Interactive Festival at Paramount Theatre on March 12, 2016 in Austin, Texas.

When Superman made his leap to the big screen 40 years ago, Margot Kiddermemorably introduced a wisecracking Lois Lane. Later hobbled by mental illness, her death in May at age 69 was ruled a suicide.

Character actor Scott Wilson, 76, went from playing criminals in 1967’s "In the Heat of the Night" and "In Cold Blood" to the beloved but doomed patriarch on "The Walking Dead;" wrestling superstar Bruno Sammartino, 82, at one point held the heavyweight championship for 11 years; the 2’8” Verne Troyer of “Mini-Me” fame, 49, is now a recurring meme; and Frank Sinatra’s first wife Nancy Sinatra Sr., mother of his three children, died at 101 (oh, what stories she could tell).

A trio of iconoclastic directors Bernardo Bertolucci, 77 ("Last Tango in Paris"), Nicolas Roeg, 90 ("The Man Who Fell to Earth"), and Milos Forman, 86 ("One Flew Over the Cuckoo’s Nest" and "Amadeus"), left techniques and approaches still emulated by filmmakers today.

Predictors of a scary digital future died as well: Douglas Rain, 90, who was the voice of the homicidal Hal the computer in 1968’s "2001: A Space Odyssey" (“I’m sorry Dave, I’m afraid I can’t do that"); and John Perry Barlow, 70, a lyricist for the "Grateful Dead" who fought for an unfettered Internet with the Electronic Frontier Federation.

The world of fantasy lost Marvel Comics’ Stan Lee, 95, whose creative achievement rivals Walt Disney in impact (just check out the images on kids’ T-shirts and backpacks these days). Working with a bullpen of artists, including the late Jack Kirby and Steve Ditko, 90, who died in June, Lee co-created Spider-Man, the Hulk, Fantastic Four, Iron Man and the Avengers, and appeared in cameos in at least 37 movies featuring Marvel characters, some not yet released.

Fans of one of television’s wackiest characters, Spongebob Squarepants, were shocked to hear that creator Stephen Hillenburg died from ALS at the age of 57. Also gone: cartoonist Mort Walker, 90, who created long-running comic strips Beetle Bailey and Hi & Lois (In the Didja Know Dept., Lois is Beetle’s sister).

Credit: Keystone/Getty Images
US country musician Roy Clark with his guitar circa 1973.

Among edgier artists were style icon Dolores O’Riordan, 46, of The Cranberries; Pete Shelley, 63, of early punk band The Buzzcocks; rapper Mac Miller, 26, a drug overdose victim and Grammy nominee; and rapper XXXTentacion, 20, who won several music awards after he was shot dead when he was robbed in Florida.

Media, literature and journalism lost conservative commentator Charles Krauthammer, 68; world food explorer Anthony Bourdain, yet another suicide at 61; chronicler of the rich and famous Robin Leach, 76; America’s most popular playwright ("The Odd Couple" is just one of his comedies) and Pulitzer winner Neil Simon, 91; Pulitzer-winning writer of angst and loss Philip Roth, 85; science fiction’s Ursula K. Le Guin, 88, and rebel Harlan Ellison, 84, so angry about digital thievery that he insisted his name be trademarked.

Tom Wolfe, 88, whose “New Journalism” stretched from acid tests to Wall Street, gave NASA a human face when he profiled the original seven astronauts in "The Right Stuff." It should be noted that two more humans who walked on the moon, Alan Bean, 86, and John Young, 87, died this year. Only four moonwalkers remain.

Superstars of sports included Willie McCovey, 80, who smashed 521 home runs, mostly for the San Francisco Giants. But he also is remembered for what could have been a game-winning two-out line drive in the bottom of the ninth that was snared by second baseman Bobby Richardson, instead handing Game Seven of the 1962 World Series to the New York Yankees. A Peanuts cartoon later that year showed an agonized Charlie Brown exclaiming “Why couldn’t McCovey have hit the ball just three feet higher?”

Credit: Steve Dykes/Getty Images
Seattle Seahawks owner Paul Allen walks on the field prior to their game against the Arizona Cardinals at CenturyLink Field on November 23, 2014 in Seattle, Washington.

The high-profile suicides of Bourdain, which seemed at odds with his delight as he savored foods of the world for CNN, superstar handbag designer Kate Spade, 55, whose name alone could move fashion, and other celebrities, shocked observers while raising awareness about the disease. Suicide is the 10th-leading cause of death in the U.S.; there are almost 50,000 deaths a year.

“Remember that help is a phone call away. 1-800-273-TALK,” tweeted TV chef Gordon Ramsay after Bourdain’s death. Spade’s brother-in-law, comedian David Spade, reached out as well: “It’s a rough world out there, people. Try to hang on.”

And we cannot forget the valiant souls lost in war zones overseas. Through Dec. 10 this year, there have been at least 29 deaths of U.S. servicemembers in the wars in Afghanistan, Syria and Iraq.

Sadly, another category of death is becoming a new abnormal: mass shootings. There were more than 300 incidents in 2018, according to the Gun Violence Archive, including massacres at schools in Parkland, Fla., and Santa Fe, a Pittsburgh synagogue and a bar in Thousand Oaks, Calif. Lives ended or were changed without warning, reason or much of a political response by lawmakers.

Others, however, know when the end is near and, hopefully, like Bush, Graham, Hawking and McCain, can be satisfied that their lives made a difference. Such was the case with commentator Krauthammer, a Pulitzer winner battling cancer for years, who told his readers of his fatal diagnosis in a Washington Post column just 13 days before his death.

“I am sad to leave,’’ he wrote, “but I leave with the knowledge that I lived the life that I intended.”

1 / 62
AFP PHOTO/WHITE HOUSE/Getty Images
George H.W. Bush poses with his wife Barbara during his campaign for Congress in the 1960's.