Strong was across the yard when he turned around and saw the encounter. His surveillance video caught it on camera. 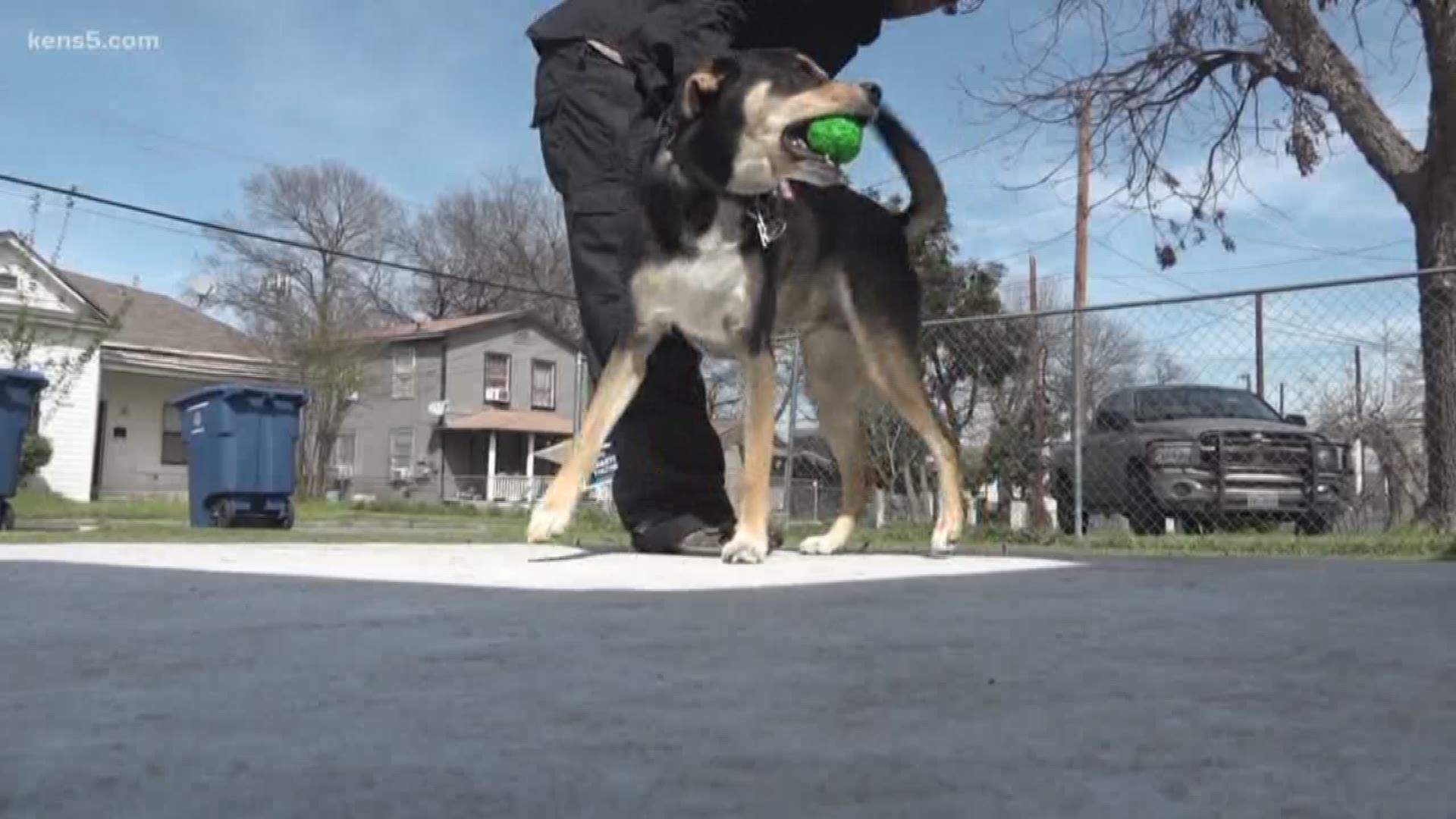 A San Antonio Veteran is furious at a mailman for allegedly pepper spraying his dog, and then threatening to pepper spray him. He says his non-violent service animal did not need to be sprayed.

"He serves as my service animal to keep me calm, and to help me with my anxiety," he said.

The veteran who served three tours overseas has PTSD and said his four-legged friend is very-well trained. But in the eyes of a mailman on a recent Saturday, the dog was a problem.

"And he starts going like this towards the dog with the mace," Strong said. "I see the dogs hair stand up on his back at the corner of my eye."

Strong was across the yard when he turned around and saw the encounter. His surveillance video caught it on camera.

"As soon as I call him over, he looks at me and he looks back at the mailman, and the mailman starts spraying the mace," Strong said.

"He looked at the dog and said, 'yeah this dog doesn't seem to be a threat to anybody,'" he said.

Strong said there was no citation given. The officer encouraged strong to file a complaint with the U.S. Postal Service, which he did.

Every mailman before this guy has had no problem," he said. "I understand if that mail-worker has been attacked by a dog in his past, I don't know. He was immediately defensive before there was even a reason to be defensive."

The U.S. Postal Service released the below statement about the incident.

"Postal Service mail carriers take pride in delivering mail promptly and efficiently. That means being able to approach their customer's mailbox without interference from a pet.

It is the dog owner's responsibility to control their pet. Most communities, like San Antonio, have ordinances for the control of dogs.

In the security video, the home owner is outside and appears to be on the phone. His dog is neither on a leash, nor is it confined inside the home or within any type of enclosure.

"Be it large or small, a dog's natural instinct will normally be to protect its territory. Homeowners must ensure that the access to their mail box is unobstructed and danger free. The loose animal posed a threat to the carrier when it began to make advances to the carrier. The carrier chases off the dog but it does appear that the dog continues to come back at the carrier.

The video does not clearly show when or if the actual spray is applied, but the dog is seen making advances. At no time can we see if the homeowner is making any kind of attempt to restrain the dog until the dog is finally put in the house.

San Antonio code compliance requires that homeowners be in compliance and the owner or keeper of any pet shall keep the animal restrained at all times and ensure that the pet does not roam or run at large.

We do not think the carrier was acting out of hostility or cruelty, he was merely protecting himself from an unrestrained animal and a potential dog bite. The Postal Service regrets any misunderstandings about keeping pets leashed or confined that this customer may have; however, most would agree that the Postal Service must protect its employees from potential injury.

In advance of Dog Bite Awareness Week, this year from April 8-14, the San Antonio Post Office is working with Animal Care Services in the production of employee safety videos and other communications materials related to animal attacks. We have secured an updated copy of changes to the codes so that the information can be incorporated into the Dog Warning letters that we issue as a preventative measure. We would ask that the public become familiar with the codes so that future incidents and attacks can be prevented."

USE OF PEPPER SPRAY

Each year Postal Service employees sustain more than 3,000 painful dog attacks and bite injuries, resulting in loss of time from work and costly medical treatment. Dog repellent is issued to letter carriers to be used on any dog that attacks, but it does not replace the policy of non-delivery of mail where there is a dog menace.

The repellent consists of 0.35 percent oleoresin capsicum (extract of cayenne pepper) and 99.65 percent mineral oil propelled by an inert gas contained in an aerosol spray can. Within 10 to 15 minutes, the effect of the repellent will wear off, and the dog will return to normal. The repellent leaves a yellow stain on the dog's hair, which is removable by washing. This coloration helps identify an animal if a check for rabies is necessary.

The repellent has undergone extensive laboratory and field tests. Veterinarians have thoroughly examined it and have stated that it is safe, effective, and a very humane method of controlling animals. A Postal Service field test showed the repellent to have a high degree of effectiveness in controlling attacking animals.

We do not condone our employees executing their duties in a manner which is not professional and courteous. We are a service organization, and we try very hard to show the public we care. The best way is to treat every customer with the courtesy we ourselves expect.

Please be assured this customer's concerns have been brought to the attention of Postal Service management and will undergo further review. Appropriate corrective action will be taken if necessary."