A few years ago, she started this first of its kind clinic in the country, a non-profit that only accepts homeless animals brought in by rescue groups and city shelters. 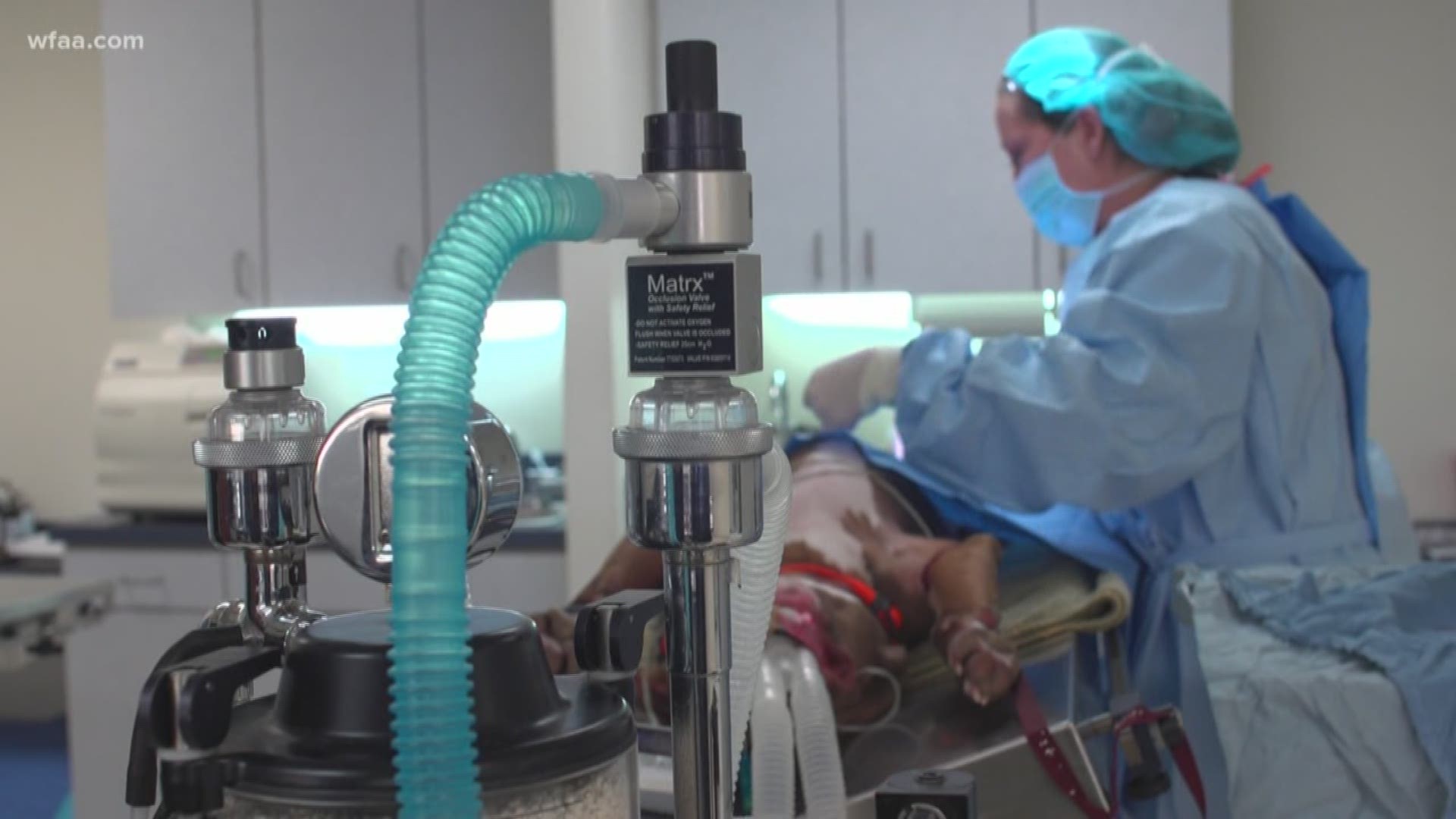 FRISCO, Texas — On Main Street in Frisco is a rarity in American veterinary medicine.

“I actually left a very prosperous career,” explained Dr. Erin Shults, veterinarian. “I was a relief doctor for a long time and made a relatively nice salary, but it wasn’t where I was supposed to be.”

A few years ago, she started this first of its kind clinic in the country, a non-profit that only accepts homeless animals brought in by rescue groups and city shelters. “Other clinics that are open to helping rescue groups, that’s only five percent of their business. Ours is 100-percent of our business,” she added.

Shults called her new practice Mazie’s Mission, after her first shelter dog named Mazie. “I was a veterinarian for over a decade, but honestly had no idea how bad it is and what went on behind the scenes,” she explained.

Ten years ago, working in a private veterinary practice, Dr. Shults had a professional turning point. She was called to help assist rescuers at a puppy mill in Kaufman County after they discovered 500 animals living in terrible conditions.

“When I volunteered my time for that puppy mill raid, it was just like this huge awakening for me. I finally said this is it. I said, 'This is what I’ve been waiting on the last 12 years.' I said, 'This is where I’m supposed to be,'” she continued. “I socked away every dime we had for four years to open up this place and it kind of took off like a shot – way busier than we anticipated it to be.”

Her new clinic is busier, seeing about 3,000 pets a year, because Mazie’s Mission charges about half the price of vet visits at private practices. “If Mazie’s [Mission] didn’t exist we would be spending an exorbitant amount of money,” said Leslie Sans, Dallas Pets Alive.

Sans and foster parents for DPA are all regulars at the Frisco clinic. “It’s a game changer for us and I know we can get reduced [priced] care but I know its good care,” she continued.

The need is constant, but funds are not. In March, the clinic will expand and move from Frisco to Carrollton.

The new location is about double the space, but there’s not enough money to purchase medical equipment for all the extra rooms. Dr. Shults hopes to raise $65,000 to purchase the additional gear but has so far only collected about $11,000 of what’s needed. “We’re going to be able to potentially save twice as many animals as we were before. We see about 3,000 animals here a year, which is amazing and we love it, but we want to expand that,” Shults said.

That’s the idea. If Mazie’s Mission can make veterinary care cheaper for rescue groups, the more animals will be saved, Shults said, and the less will have to be euthanized.

“We bring in the broken and the abused and neglected and maybe the not-so-perfect and we heal them as much as we can and show them what love is,” Shults concluded. “I just genuinely believe every animal deserves exceptional veterinary care whether they have a home or not.”