‘It’s really tough’: Liz is diabetic, has no insurance and is fired up to vote on Super Tuesday

Health care is a top issue in the Democratic primaries. Liz is diabetic and has no health care. As Super Tuesday nears, she verified where each candidate stands. 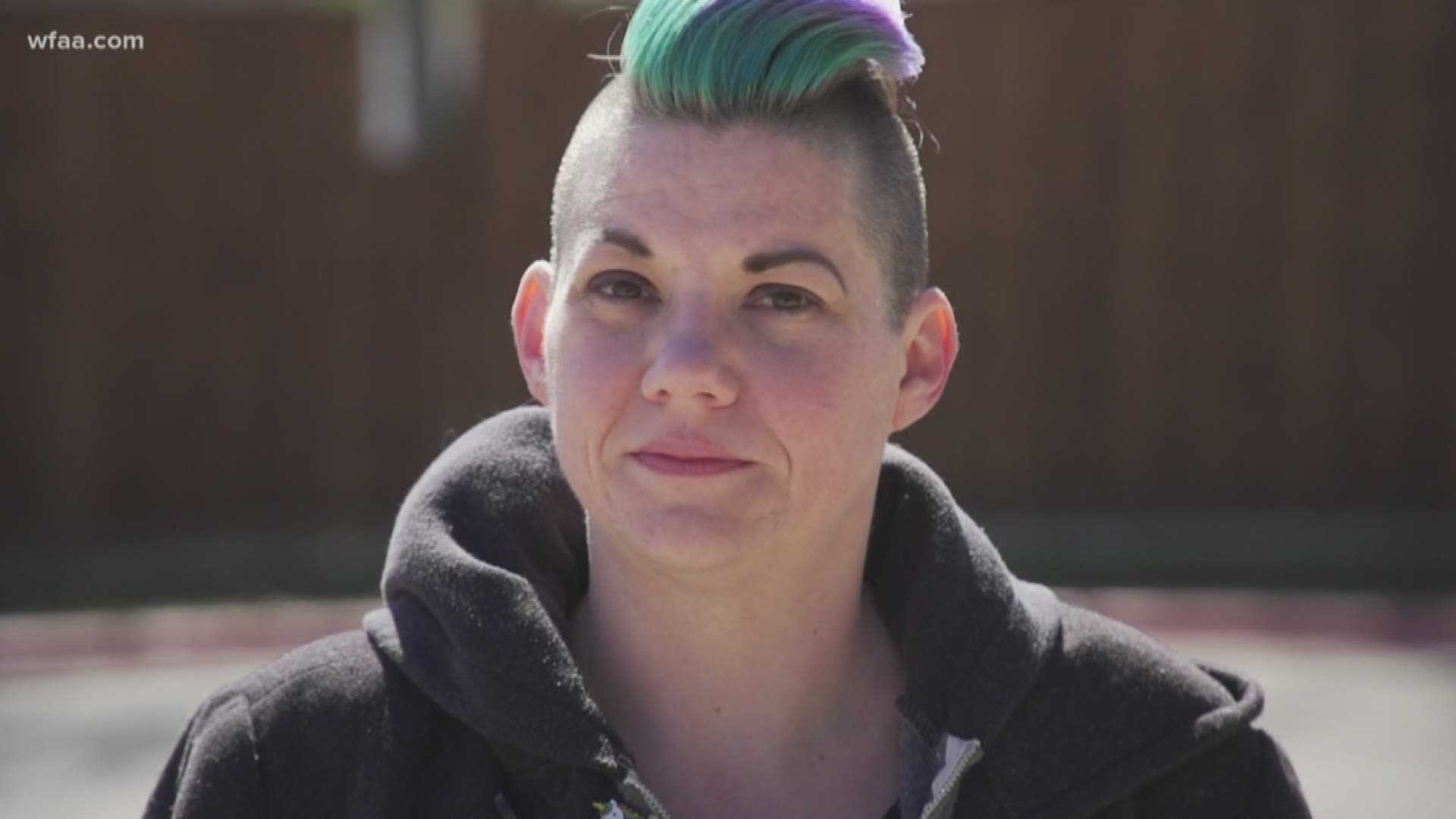 DALLAS — Elizabeth (Liz) Darbon has lots of experience making pizza. What she doesn't have is health insurance. She’s among the one in five Texans who don't.

It's a problem for Darbon because she's been a diabetic since she was a kid.

“What's it like to have such a serious illness and not have insurance?” I asked.

Darbon is a Democrat. She likes the idea of Medicare for All but doesn't know who she'll vote for yet on Super Tuesday.

“I feel like privatized health care is a racket. It's a business. It's not out there for people,” she said.

My job is to help Darbon explore how the candidates approach health care. To do that, I communicated with the six highest-polling campaigns in Texas. In the end, only three chose to participate.

Let’s see what we found out.

Our first stop was a rally for Senator Bernie Sanders on a visit to Mesquite, Texas.

Darbon and I started out by interviewing some of the people who’ve come to support the senator from Vermont.

“What are the parts of his plan you think are the best? His health care plan?” Darbon asked one Sanders supporter.

“I think as a taxpaying American citizen I think everyone has a right to health care,” said Jacqueline McCloud from Dallas.

“Yes, he doesn’t have his whole plan laid out,” said Barbara Johnson, also from Dallas. “But I don't believe anyone does, no matter whether they say they do or not,” she added.

“You believe he's the man that can get the job done?” Darbon asked Ahmed Muhammed from Irving.

“Yes, I do believe so,” Muhammed said.

“We are going to move to end this cruel and dysfunctional health care system and move to Medicare for All,” he said.

Darbon liked what she heard.

“I do like [Sanders'] attitude," she said. "I like his presence. He seems very, very strong,” she observed.

“We have a system that says if you come down with cancer, or heart disease, or somebody in your family has Alzheimer’s, it's not enough to struggle and stay alive to get healthy," Sanders said at the Mesquite rally. "Your family is going to go bankrupt because you got sick. That is obscene, we're going to end all of that."

In all, Sanders spent about two minutes talking about health care.

“You know, I think it would have been good if he had hit just a little bit deeper on a few of the talking points,” Darbon said.

“Particularly health care, because that's what you're interested in,” I said.

Darbon and I then looked at the big picture with economist Ray Perryman. He studies the economic impact of health care policy and he broke down the candidates’ positions.

“There are literally two headlines out. Everyone has two things and its one or the other. One of them is the public option. That's what Vice President Joe Biden has. The other is Medicare for All,” Perryman said.

Medicare for All is what Sanders and Sen. Elizabeth Warren support. It eliminates private health insurance plans. Instead, the government pays your medical bills. Basically, it builds a brand-new system.

“A sudden change like that would be very difficult,” Perryman said. “All 320 million of us all have our insurance from the same place. You begin to see that's an astronomical expense."

RELATED: Texas has an open primary. What does that mean?

Variations on the public option is an idea supported by Vice President Joe Biden, Mike Bloomberg, Pete Buttigieg and Senator Amy Klobuchar. It keeps private health insurance. But, if you prefer, you have the option to buy government health insurance if you like that better. This plan builds on the Affordable Care Act.

“You see some of both,” Perryman said. “One thing that the private sector profit motivation does is compels them to try to be efficient. Use the resources well."

As we wrapped up the interview, Darbon said she saw the role of private health insurance in a more nuanced way than when she started this journey.

“It puts things in a bit more of a perspective of what can we expect in reality,” she said.

Not broken for everyone

Our next stop was the Mike Bloomberg campaign office in Dallas. In a video on his campaign site, Bloomberg talks about the public option like this:

“Every American will be guaranteed access to affordable health insurance. That means millions of Americans that don't have health insurance can get it and we'll finally achieve universal coverage in this country."

Julie Johnson is a Texas state representative and the co-chair of the Mike Bloomberg campaign in Texas, and answered our questions on our visit to the campaign’s Dallas office.

“Of course, the appeal of Medicare for All. It sounds so good. But how feasible is it, really has been my question, which is why I'm where I'm at,” Darbon said to Johnson.

“That's why there are so many critics of those proposals,” Johnson said.

“If you're saying the health care system is broken — and we hear that a lot — why try to fix the existing system and not just have this new system, Medicare for All, that's a popular idea with a lot of people?” I asked.

“The health care system isn't broken for everyone, I think that's the thing," Johnson said. "People who have good health insurance plans, they feel like the insurance is working just fine for them,” Johnson said. “Where it's broken is, our system doesn't include everyone."

After the interview, Darbon took a moment to process.

“I'm glad I had this opportunity because it honestly does seem like [Bloomberg's] health care plan is the most realistic,” she said.

As the candidates took the stage Feb. 25 for a final debate before Super Tuesday, we watched the event with members of the Warren campaign.

“Getting a progressive agenda enacted is going to be really hard. And it's going to take someone who digs into the details to make it happen,” Warren said during the debate.

Warren said her Medicare for All plan will cost $52 trillion over 10 years.

Fredrick Joseph is a surrogate for the Warren campaign who interviewed with us.

“What is it about Elizabeth Warren’s health care plan that you're more excited for than Bernie's?” Darbon asked Joseph.

“I think the key word there is 'plan.' Warren has three steps that she's looking at for rolling out Medicare for all, as opposed to just saying that she has an idea,” Joseph said.

“I think [Darbon] is interested in plans that can actually pass. Is that fair to say? Is this one of them?” I asked Joseph.

“Absolutely. I think that's what makes Elizabeth Warren different from not just a Bernie, but different from all candidates,” he said. “She has a way it's going to get paid for. She understands when it's going to roll out. She already has people in mind who she wants to run these different things. She's meticulous."

And how does Darbon feel about the Warren campaign?

“I've read over her plan regarding health care. I do like a lot of the things it has to say,” Darbon said. “I don't think I'll make my final decision until I'm standing in the booth."

This trip ends with Darbon voting. I met up with her at her polling location in Denton, Texas to find out what she decided.

“So, who did you vote for, for the Democratic nominee for President?” I asked her.

“The has the most comprehensive, actual plan out there with a lot of detail telling you how she wants to transition from where we are to Medicare for All,” Darbon said.

Before she made her final choice, Darbon put in a lot of work getting to the bottom of an issue she cares about.

That something we should all do before we vote.

Don't take my word for it, take hers.