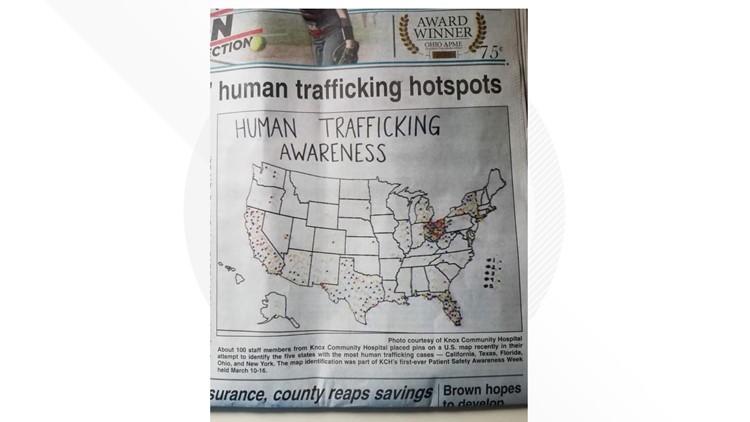 Photo by: Mount Vernon News of Ohio
A Facebook post sharing a photo of a newspaper article with a map framed as human trafficking hotspots has resurfaced into the spotlight.

A Facebook post sharing a photo of a newspaper article with a map framed as human trafficking hotspots has resurfaced into the spotlight.

The post is from April of 2019, but has appeared again over recent weeks. It used the map to claim that Ohio and western Pennsylvania are two of the biggest hotspots in the country for abductions and human trafficking.

Is this a real map of human trafficking hotspots?

No, it’s a map where hospital staff members guessed where human trafficking hotspots are. However, they did get pretty close.

The news article in question is this article from the Mount Vernon News in Ohio. The article itself says the map is not an actual visual for human trafficking hotspots but is instead the results of attempts by 100 hospital staff members to pin the five states where trafficking is the most prevalent.

However, the article says that the hospital staff came close to being accurate. While only two members got the order of the top five correctly, many of them correctly identified California, Texas, Florida, New York and Ohio as the states where there’s the most trafficking.

RELATED: VERIFY: Does 90% of ocean plastic come from 10 rivers in Africa and Asia?

This lines up with the data from the Human Trafficking Hotline.Those states are the top five in number of human trafficking cases reported. Pennsylvania, which is mentioned in the Facebook post, is 11th.

Polaris, which runs the Human Trafficking Hotline, has its own map of hotspots from 2017. Many of the spots are centered around big cities.

Additionally, the original post makes mention of abductions. The data regarding the states does not include abductions. Traffickers rarely kidnap their victims, according to Polaris.