UT-Austin prepared a list of scenarios that would lead to a shutdown this fall. One trigger: a student dying of COVID-19.

Earlier this month, the University of Texas at Austin laid out a list of scenarios that could trigger a midsemester closure. Prominent on the list: a student death. 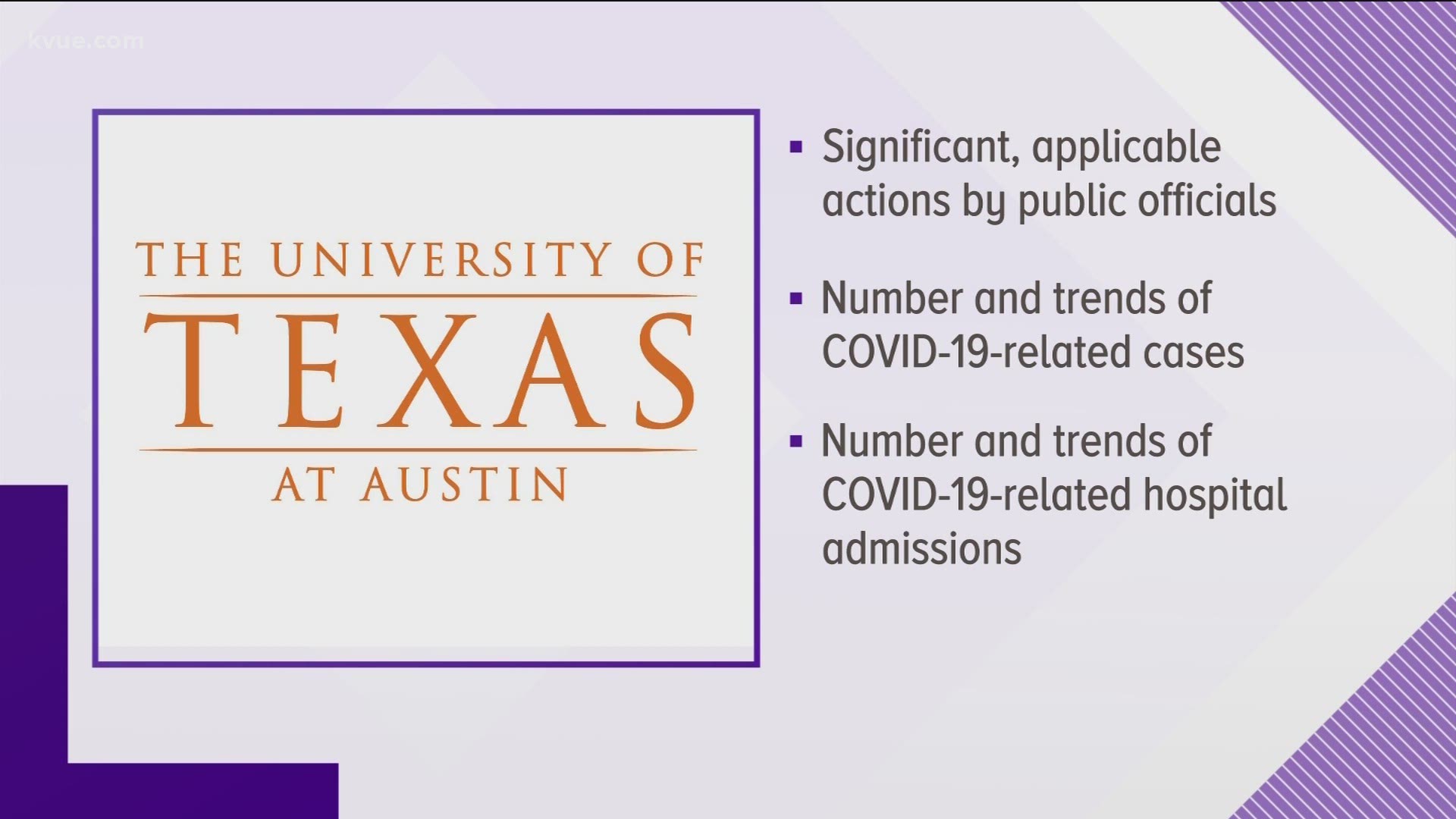 AUSTIN, Texas — Texas universities planning for students returning to class this fall in the midst of a global pandemic are already preparing for the possibility that they could have to abruptly shut down campus again if conditions worsen.

Earlier this month, the University of Texas at Austin laid out a list of scenarios that could trigger a midsemester closure. Prominent on the list: a student's death.

The acknowledgment that a student on campus could die from the coronavirus served as a grim reminder to the UT community of the risks people will be facing when thousands of students file into classrooms, dormitories and dining halls this August at a time when all Texans are being told to space out and stay home when possible.

Universities and colleges nationwide made the unprecedented move to send all students home in the middle of the spring semester, when coronavirus cases were relatively low. Now students will return to school as Texas emerges as one of the nation’s hot spots for the virus, and as people in their 20s have become one of the fastest-growing populations of those being infected.

Earlier this month, UT-Austin laid out a comprehensive set of benchmarks answering the question of what it would take to close down campus again. Along with student death, these triggers to campus closure include “significant actions” by the governor or other public officials, sharply diminished hospital capacity, testing shortages on campus and unmanageable, widespread clusters of cases.

Another school closure would result in canceled sports, completely virtual instruction and students being kicked out of dorms. It also could leave universities on the hook for millions of dollars owed back to students, just as it did last spring.

As the first day of school nears, experts and public health advocates have sounded alarms for what a full-scale return to campus could do to students and the state.

“College students know they need to wear a mask, they can follow instructions ... but with the extracurriculars, the sporting events, living in dorms and shared spaces — you’re going to have a lot of bodies in one area, mostly indoors,” said Jill Weatherhead, a professor of tropical medicine and infectious diseases at Baylor College of Medicine. “While it may not have a massive impact on students themselves, they go back to their own communities. It’s just adding fuel to this transmission cycle that is then difficult to get under control.”

UT has outlined six phases, from fully open to a complete shutdown. Administrators said the school is expecting to open at Level 3 — campus buildings are open and operational, but large numbers of classes will be online. Moving to Level 4 would see further restrictions, with only “skill” classes allowed to be taught in-person, while the last level would transfer all classes online in a repeat of the spring.

While a student death would trigger school closure at UT-Austin, no mention was made of what would happen if a staff or faculty member died from the coronavirus.

A week after publishing its reopening plans, a custodial service worker tested positive and died. Interim president Jay Hartzell said in a letter to the UT community that it was the university’s first death related to COVID-19.

Statistically, college students are less likely than other people to die from COVID-19. Earlier this summer, state officials pointed to people in their 20s as primary factors in the state’s soaring case numbers. Although nationally around 20% of people who have contracted the virus so far are between 18 and 29, people in that age group made up only 0.5% of deaths in the country, according to data from the Centers for Disease Control and Prevention.

“From a medical standpoint, it's unlikely that someone in the age group of a student would actually die,” said Amy Young, the chief clinical officer for UT Health Austin.

But the messaging has prompted outspoken concern from students like Shelby Hobohm, a UT-Austin senior who said the university’s acknowledgement that students could die from campus exposure is reason enough to not have them return.

“I was shocked. ... I didn't think that was going to be said so openly,” Hobohm said. “If a student dies from reopening campus — these are completely preventable deaths. They’re not thinking critically about how the administration can protect people.”

Hobohm said she is leaning towards completely online classes — mirroring similar decisions from Harvard University and the University of California system — as the best option for her and her classmates. Otherwise, she worries about an explosion of cases midway through the semester.

UT-Austin is something of an outlier nationally for so clearly identifying benchmarks that would trigger another shutdown.

Chris Marsicano, a professor of higher education policy at North Carolina’s Davidson College who heads the newly formed College Crisis Initiative out of Davidson, is studying institutional response to the pandemic. He said he has not yet heard of a similar phased approach to shutting down from any other university.

The two other most populous institutions in the state, Texas A&M University and the University of Houston, have not released information on how officials would navigate another shutdown.

Marsicano called the list of triggers a “brilliant strategic move.” By publicly outlining the steps it would take to shut down, the UT-Austin plan creates an “accountability mechanism” that can potentially ward off campus closure, he said.

“Any university administration worth its salt has a plan written down somewhere for the fall. ... The question is if they are releasing it to the public,” Marsicano said. “[The University of] Texas is taking a real leadership role in higher education right now that we don’t even see in the Ivy League.”

On the flip side, UT-Austin has not given itself much flexibility.

“What the administrators have done is, by writing down the triggers, they have provided an expectation, a contract, to any student who enrolls,” Marsicano said, adding that the university could be opening itself to lawsuits if it doesn’t follow its own policy.

Yet even as UT-Austin and most other large institutions push forward with reopening, a handful of smaller schools recently decided they won’t be taking the risk.

One of those is Paul Quinn College in Dallas, a historically Black institution that made the decision last week to offer online classes only, becoming one of the first colleges in the state to do so. That announcement was quickly echoed by Jarvis Christian College, another historically Black college near Longview; a third, Huston-Tillotson University in Austin, said in June it was going online.

Paul Quinn President Michael Sorrell said he made the choice after drawn-out consultation with experts. The school ultimately moved all classes online and slashed tuition by $2,000 for every student while promising Wi-Fi and laptops to those who need them.

But there will be a significant financial hit; Sorrell has already crunched the numbers and budgeted for a decrease in student enrollment.

“I'm not saying I've got a crystal ball that has told me that this isn't a risk. ... It's absolutely a risk. The difference is, it's also a risk bringing people back to a petri dish,” Sorrell said. “If you have sick students everywhere, ailing staff, and heaven forbid — someone dies? That just struck me as the worst option.”

Disclosure: University of Texas at Austin, University of Houston, Huston-Tillotson University, UT Health and Texas A&M have been financial supporters of The Texas Tribune, a nonprofit, nonpartisan news organization that is funded in part by donations from members, foundations and corporate sponsors. Financial supporters play no role in the Tribune's journalism. Find a complete list of them here.

"UT-Austin prepared a list of scenarios that would lead to a shutdown this fall. One trigger: a student dying of COVID-19." was first published in The Texas Tribune here.

WATCH: The changes that are coming to UT Austin

Connecting the dots: The changes coming to UT Austin after demands from student-athletes