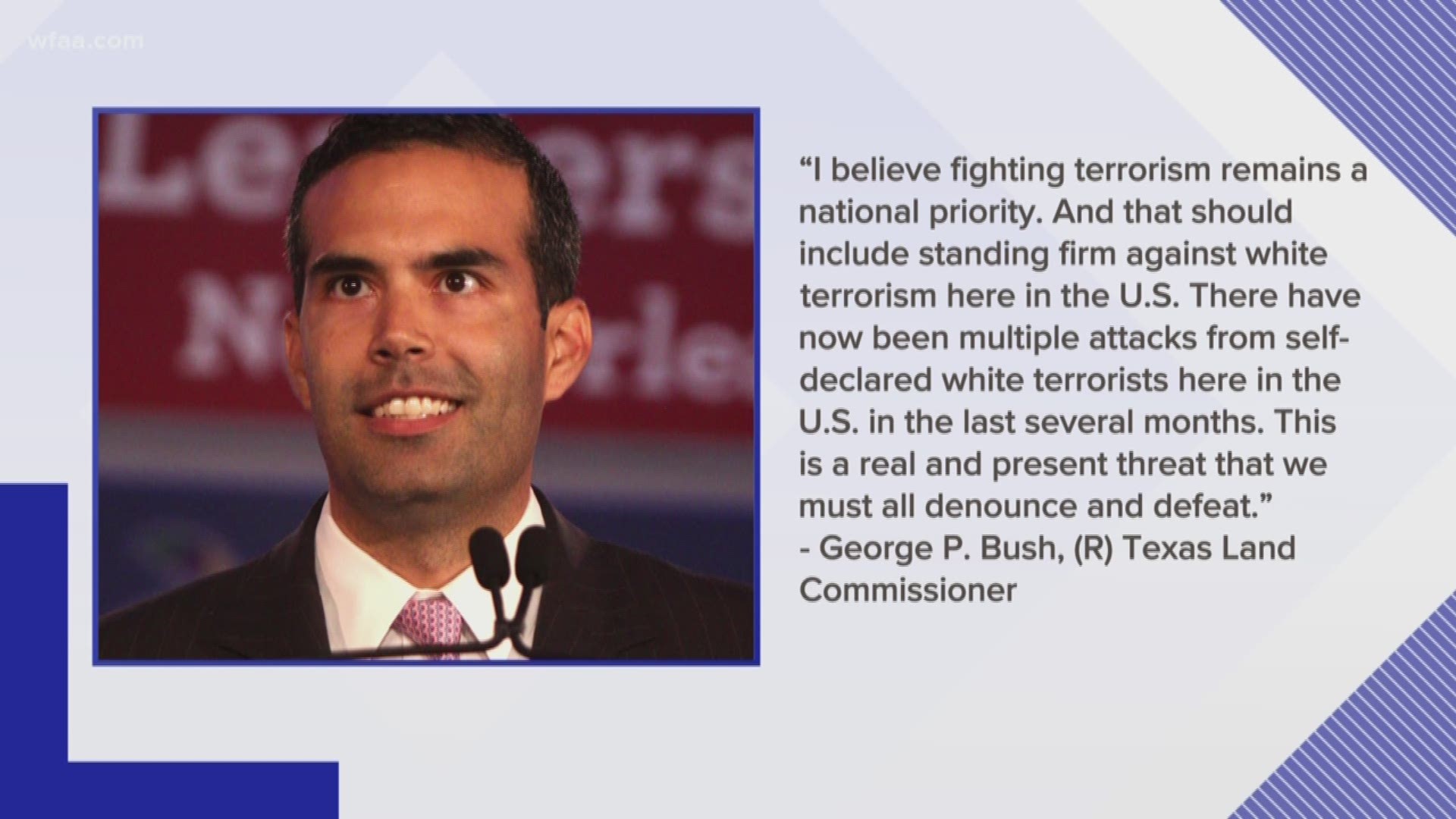 Texas Land Commissioner George P. Bush, grandson to one president and nephew to another, was first and most declarative by calling the shooter a “white terrorist.”

“I believe fighting terrorism remains a national priority,” Bush wrote on Twitter. “And that should include standing firm against white terrorism here in the U.S. There have now been multiple attacks from self-declared white terrorists here in the U.S. in the last several months. This is a real and present threat that we must all denounce and defeat.”

Yesterday, a young white man from Allen, Texas opened fire on Hispanic shoppers at a Walmart in El Paso killing 20 people and injuring more than two dozen others.

In a four-page letter before the attack, the 21-year-old shooter wrote: “This attack is in response to the Hispanic invasion of Texas. They are the instigators, not me. I am simply defending my country from cultural and ethnic replacement brought on by an invasion.”

U.S. Senator Ted Cruz had a strong and somewhat similar response on Sunday.

“As the son of a Cuban immigrant, I am deeply horrified by the hateful anti-Hispanic bigotry expressed in the shooter’s so-called ‘manifesto.’ This ignorant racism is repulsive and profoundly anti-American. We must speak clearly to combat evil in any form it takes,” Cruz wrote.

U.S. Rep. Dan Crenshaw, R-Houston, also said: “White supremacy has no place in this world. Violence inflicted because of someone’s race or ethnicity is vile, repulsive, and one of the worst evils we face. It must end.”

Neither Bush, Cruz nor Crenshaw said anything critical about President Trump’s rhetoric that Democrats said likely fueled the shooter’s motive.

A search of Tweets over the last 18 months shows the president has used the word “invasion” at least six times when referring to immigrants at the southern border.

On Sunday, President Trump offered condolences to victims and families in El Paso saying, in part, “we love the people. Hate has no place in our country.”

Trump said he has spoken to members of Congress about what they might be able to do, according to a White House pool report.

“A lot of things are being done right now,” the president added. “I’ll be making a statement tomorrow, sometime.”

When asked what can be done about gun laws, the president said: “I’m talking to a lot of people, and a lot of things are in the works. We have done much more than most administrations. We have done, actually, a lot, but more has to be done.”

Trump, too, blamed a lot of mass shootings on people who are “very, very seriously mentally ill,” and then repeated that “a lot of things” are happening right now.”

During a press conference on Saturday, Governor Greg Abbott, R-Texas, said mental health is likely one of the causes of the El Paso massacre.

"We've always had guns, always had evil, but I see a video game industry that teaches young people to kill," he said on Fox & Friends.

"We've got to acknowledge the hatred, the open racism that we're seeing. There is an environment of it… we see it from our commander-in-chief. He is encouraging this. He doesn't just tolerate it, he encourages it,” said Beto O’Rourke, D-presidential candidate and former congressman representing El Paso.

RELATED: Beto O'Rourke on El Paso shooting: 'I am incredibly saddened and it is very hard to think about this'

Julian Castro, former Democratic mayor of San Antonio who’s also running for president, said: “There is a both a serious gun violence epidemic, as well as a toxic brewing of white nationalism taking place in the United States right now. We can, and must, address both of these crises with the urgency this moment demands."