"At some point we'll be all rushing again and we'll probably look back on this fondly," Kirk Swann said of the valuable time now spent with his children. 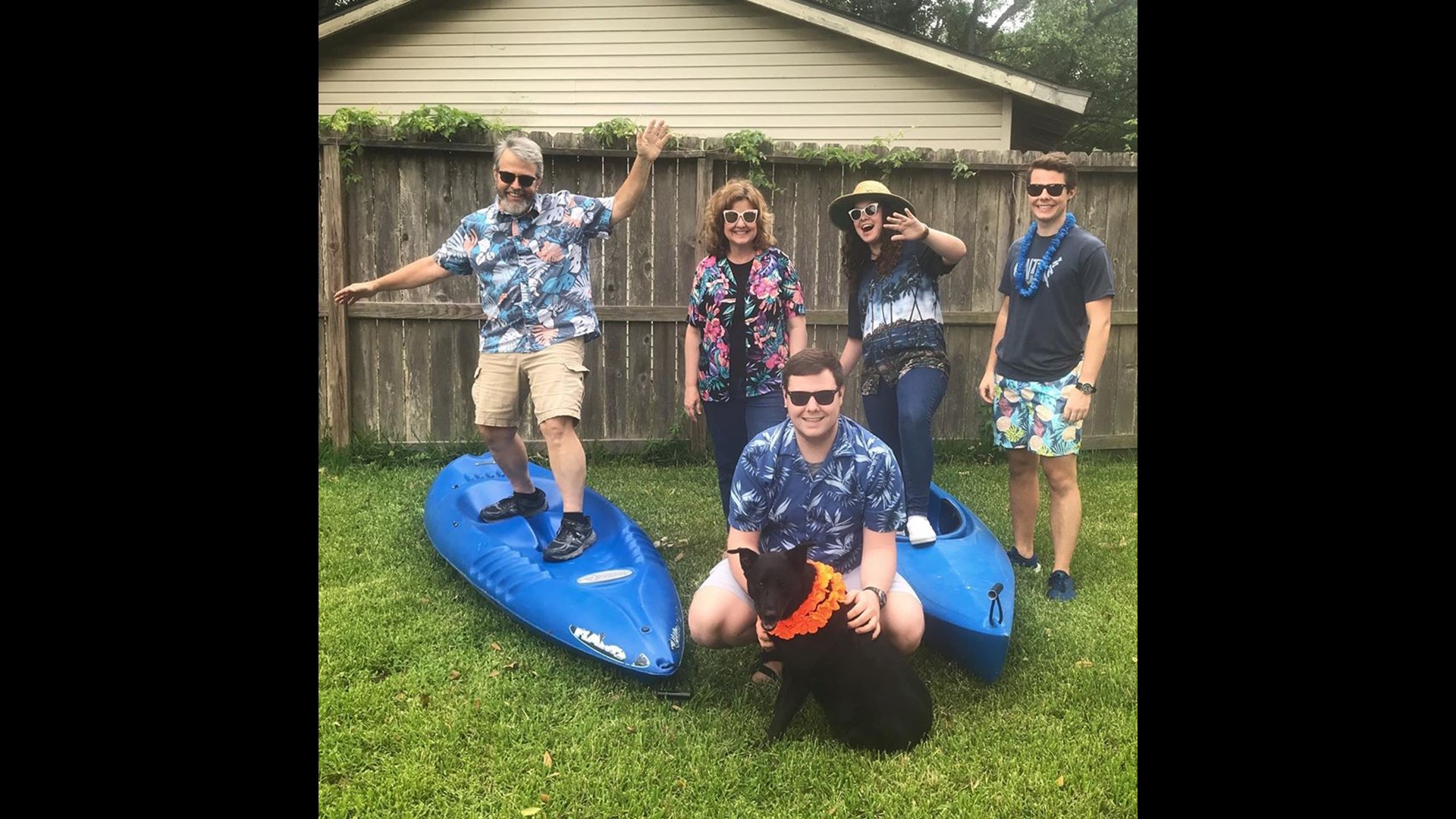 DALLAS — The continuing shelter-in-place orders across the United States are putting some families to the test, strengthening the bonds of some and proving a bit too much togetherness for others.

But if your quarantine life has you pacing in physical and mental circles, trapped in a loop where you don't seem to know what day it is or when the long and lonely solitary days will end, you need to meet the Swann family from El Lago, Texas: Kirk and Keli and their kids George, 23, Jambres, 19, and Phoebe, 17.

They have figured out how to do this quarantine thing right.

"How's everybody holding up?" WFAA's Kevin Reece asked the family of five in a Zoom conference call.

"We're good," Kirk said from their home near Houston.

They are good because Kirk and Keli work for Clear Creek ISD, Kirk in video production and Keli a 3rd and 5th grade teacher. They are each able to work mostly from home.

"This is the fourth week of distance learning," Kirk said.

"Fifth week for high school because they started a week before us," said Keli.

George and Jambres both attend the University of Houston. Phoebe is in high school. They each are taking classes remotely now. But still, five people together almost 24 hours a day, how do you survive that?

"The first day I was a little annoyed," George admitted. "I think it was college shirt day."

It was the first backyard photo session. It was Keli's idea. It's a fun activity at her elementary school. So why not at home too.

"'Blackout Day' was my favorite," George said of the photo of the family, in v-formation as if on the cover of a music album, everyone dressed in black to match their dog Daisy.

"My favorite was 'Fancy Friday,'" Jambres said of the photo staged in the living room next to the fireplace, everyone dressed in their Sunday best.

And since they started the five-day a week tradition, they've had "Crazy Hair Day," "Tropical Vacation Day," complete with floral shirts and Kirk and Phoebe perched on top of kayaks, "Merica Monday" with everyone dressed in their patriotic best, and "Texas Tuesday" with everyone donning Texas red, white and blue.

"I think they're fun," Phoebe said of the sudden family tradition.

"It's a goofy little project that we've gotten to work together on. So, that's what I kind of like," said Keli.

And their friends on social media like it too, with the Swann family inadvertently offering us all a quarantine life lesson.

"Before this we were almost never home at the same time," said Keli. "And we sat down to eat dinner maybe once a week."

"It's nice that we're all here together. And we're just able to spend time together," Phoebe said.

"I think the fact that we liked each other a month ago or two months ago and liked to do things together has set the stage for being able to spend a lot of time together now," Kirk said. "At some point, we'll be all rushing again. And we'll probably look back on this fondly. And I think that I will."

So until the crisis ends, the Swann family will stay together and keep coming up with backyard photo ideas.

"Wednesday we have 'Wacky Sock Wednesday,'" said George, consulting the list he keeps in his room. "Monday is Jambres' birthday, so we're doing 'Birthday Day.' I'm not sure what we're going to do for that yet."

"As long as it's not 'Birthday Suit Day'," Reece said.

"We're gonna hard pass on that," Kirk said as they laughed.

Meanwhile, the Swann's have watched the entire Marvel movie franchise, 23 movies in all, have Nerf guns at the ready in case they need to relieve any stress, and see one other benefit to their shelter-in-place too: normally they'd all be commuting to school.

"And our gas tanks now are getting like three weeks to the gallon," George said.