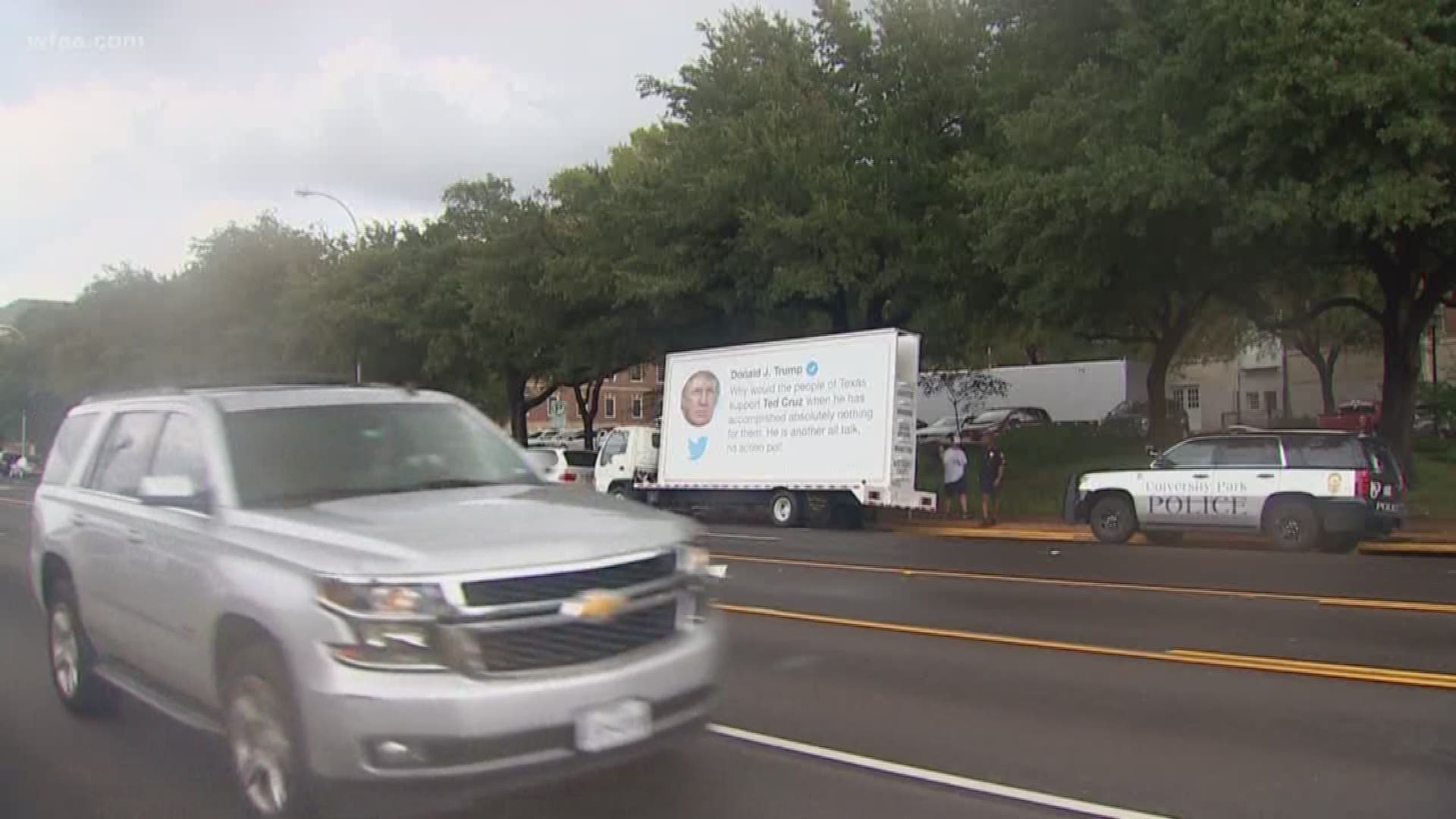 Appearing at Southern Methodist University, the candidates exchanged rhetorical blows on just about every single question, showing off sharp differences that have long been evident in the race. But what stood out was O'Rourke's combative posture toward Cruz after spending his campaign until this point largely ignoring the incumbent.

Throughout the debate, O'Rourke repeatedly reminded viewers that he was the only candidate on the stage who has visited all 254 counties in Texas — and forcefully pushed back several times as he came under fire from Cruz.

“This is why people don’t like Washington, D.C. — you just said something that I did not say and attributed it to me," O'Rourke told Cruz at one point. "This is your trick of the trade, to confuse and incite based on fear."

The debate was feisty from the opening question, which was about whether "Dreamers" — young people who were brought to the country illegally as children — should be given a path to citizenship. Holding firm on his support for that idea, O'Rourke charged Cruz with promising to "deport each and every single Dreamer — that cannot be the way that Texas leads on this issue." Without denying it, Cruz shot back that O'Rourke is focused on "fighting for illegal immigrants" and that "Americans are Dreamers."

Even on the ostensibly positive last question — What do you admire about your opponent? — Cruz appeared to fit in a jab, or at least a back-handed compliment. Going first, O'Rourke said that as a fellow member of Congress, he respected the sacrifice Cruz was making with his family to do what he believed was best for the country.

When it was his turn, Cruz said he admired O'Rourke for being passionate and believing in what he is fighting for — much like Bernie Sanders, the self-described Democratic socialist, Cruz noted.

The topic of the debate was domestic policy. It was moderated by NBC 5 political reporter Julie Fine and Dallas Morning News political writer Gromer Jeffers.

They clashed early over immigration, with O'Rourke saying Cruz "has promised to deport each and every single Dreamer" — young people brought to the country illegally as children. "That cannot be the way that Texas leads on this issue," he said.

Cruz fired back that "over and over again, [O'Rourke's] focus seems to be on fighting for illegal immigrants," not American citizens. "You know, Americans are dreamers also."

Cruz and O'Rourke mixed it up over NFL players kneeling during the national anthem, which O'Rourke has defended in comments that have received national attention.

O'Rourke reiterated at the debate that he believes "there's nothing more American than" such nonviolent protests, which the players say they are doing to draw attention to racial inequality.

Cruz shot back at O'Rourke that "nowhere in his answer did he address" that, in Cruz's view, kneeling during the anthem is disrespectful to veterans. Players have a right to protest, Cruz added, when they can do it in a way that does not "disrespect the flag."

Jeffers asked Cruz why he criticized O'Rourke for jumping to conclusions about Dallas Police Officer Amber Guyger, who is accused of fatally shooting a black man in his apartment after she mistook it for her own unit in the same building. Texas Rangers and the Dallas County district attorney quickly charged Guyger with manslaughter.

Cruz said O'Rourke sides against police, voted against funding body armor for law enforcement and is open to abolishing Immigration and Customs Enforcement.

"I'll tell you, it's a troubling pattern," Cruz said.

O'Rourke said he's concerned at the high numbers of black Americans who are killed by white police officers.

"We have something wrong," O'Rourke said.

In response, Cruz recalled meeting with victims of the Santa Fe school shooting and them telling him, "Gun control's not the answer."

"I’m sorry that you don’t like thoughts and prayers," Cruz shot back. "I will pray for anyone in harm’s way, and I will also do something about it."

More fireworks flared up as Cruz and O'Rourke tackled the topic of their respective relationships with President Donald Trump.

O'Rourke insisted he would work with anyone who has the best interests of Texas in mind, including Trump. Cruz pounced in his response, bringing up O'Rourke's support for impeaching Trump.

"As far as I know, Congressman O'Rourke has never spoken to the president other than to publicly call for his impeachment," Cruz said. "When you are leading the extreme left wing wanting to impeach ... the president, that does not set you up for policy wins for Texas."

Cruz was asked whether he lost his dignity by supporting Trump after losing to him in a bruising 2016 Republican primary that saw Trump deriding the senator's wife and father. Cruz said that in an election "unlike any other," he made a conscious decision to put any personal hurt feelings aside for the good of Texans.

"I've got a responsibility, which is to fight for everybody here and every person in this state," he said.

"We need a junior senator who will stand up to this president," O'Rourke said.

O'Rourke was asked about the details of his 1998 drunk-driving arrest in light of a Houston Chronicle report indicating he may have tried to flee the scene of the accident.

"I did not try to leave the scene of the accident," he said, adding that "driving drunk ... is a terrible mistake" for which excuses should not be made.

Cruz responded that he does not "intend to get into Congressman O'Rourke's personal history, but I will keep the focus on issues and substance" — and pointed to legislation that O'Rourke supported that Cruz said would make it easier for people with drug convictions to get driver's licenses.

When asked how they represent Texas values, both men took the opportunity to smear their opponent based on campaign contributions. Cruz painted O'Rourke as a far-left ideologue beholden to "liberal interests." O'Rourke portrayed Cruz as someone who is "captured" by corporations and special interests.

The two did find common ground in one area: When asked about how best to cover the health care needs of Texans, both men said Americans should not be rejected for health care coverage for pre-existing conditions.

The Friday event was the first of three hour-long debates, and it comes as polls continue to show a tight race between Cruz and O’Rourke, an El Paso congressman. On Friday morning, the Cook Political Report changed its rating of the race from “Lean Republican” to “Toss Up.”

The next two debates are scheduled for Sept. 30 in Houston and Oct. 16 in San Antonio. Early voting begins Oct. 22.

It was only a week ago that O’Rourke and Cruz had announced an agreement to hold three debates, capping weeks of negotiations between their campaigns.

O’Rourke first challenged Cruz to six debates in May, and while Cruz maintained he was open to debating his opponent, he did not formally respond until July. That is when Cruz proposed five topical debates over three months in five cities.

Among the issues that O’Rourke had with Cruz’s proposed debate schedule was every one fell on a Friday evening during high school football season. That will remain true for the Dallas debate, while the other two debates they ultimately agreed to are set for different days.

Disclosure: Southern Methodist University has been a financial supporter of The Texas Tribune, a nonprofit, nonpartisan news organization that is funded in part by donations from members, foundations and corporate sponsors. Financial supporters play no role in the Tribune's journalism. Find a complete list of them here.