What's even more fascinating than the paintings is their origin story: A hastily-planned study abroad trip and a 2001 Tom Cruise flick. 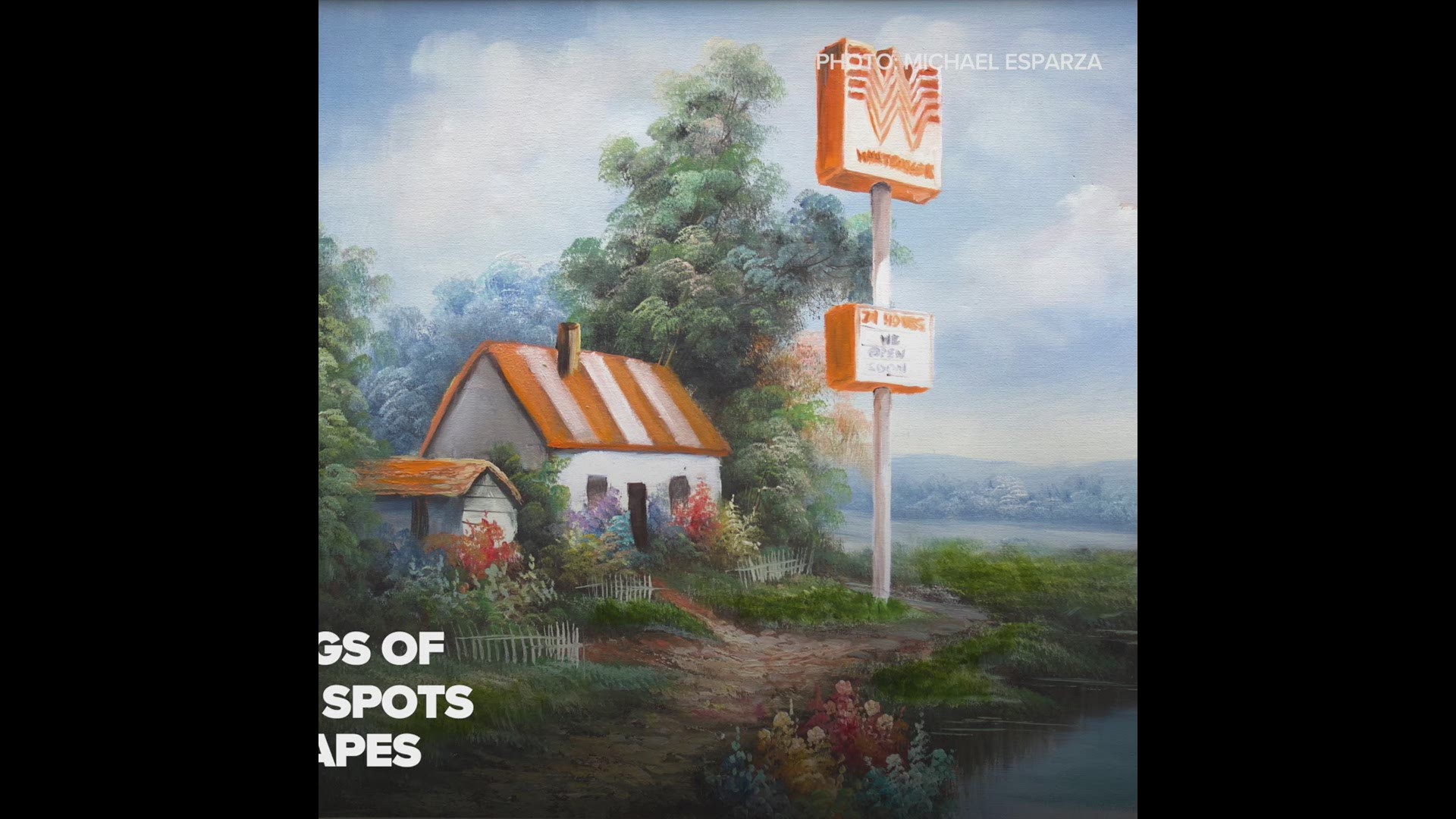 A Whataburger is transformed into a quaint cottage enveloped by lush, whimsical lake scenery. A Buc-ee’s sign sits off the edge of a creek that divides an idyllic forest landscape. Bill Miller’s BBQ, Mama Margie’s and Taco Cabana are among the other eateries juxtaposed with beautiful backdrops.

Michael Esparza is the hero none of us deserve – the San Antonio artist whose brushstrokes created the now-viral ode to Lone Star State culture. He painted the oil-on-canvas pieces earlier this year.

The Kinkade-esque paintings have struck internet gold, scoring hundreds of Etsy sales in a span of a few days while garnering state- and nationwide attention.

It’s a fascinating symbol of both the potential for wildfire-like virality and good ol’ American capitalism.

But what’s even more fascinating is the series’ origin story. Esparza, 31, says we all have a hastily-planned study abroad trip and a 2001 Tom Cruise film to thank for the unique paintings.

Several years ago, Esparza was a student at the University of Texas-San Antonio when he decided to take his studies abroad to Italy. As a college student is wont to do, he went to Italy six months before the six-month program.

What sounded like a great idea, well, wasn’t fully fleshed out, he said.

Upon arrival, he immediately hit the language barrier, was notably without WiFi and thus without the internet’s help. His first months in Italy saw him get “really, really lost” on different occasions – “like, you could go an hour in any direction and still have no idea where you are” kind of lost.

While studying there, though, things improved. He visited five or six European countries and fully immersed himself in a “massive art wave” there.

He was assuredly far from home in southern Texas. In fact, “Texas” has a whole different meaning throughout Europe.

“That’s like their slang. And it’s not kitsch or a small group. It’s a known thing.”

So, when he returned home after a year across the pond, he experienced what he calls “the opposite culture shock.”

“I was seeing how Texas is with new eyes,” he said. “Signs that I had grown up with started getting a new meaning.”

After all, in Italy, buildings aren’t any taller than the churches, and the roads connecting Italian cities are nothing like Interstate 35.

“When I was growing up, those signs made sense,” he said. “You just make your sign bigger so more people can see you from the highway. They don’t have highways [in Italy].”

His return stateside made him want to marry the European charm with the Texas signage – something he never knew was a novelty. But it wasn’t just a cultural re-adaptation that inspired the “restaurant series.”

Shortly after his return from Europe, Esparza involved in a major car accident. He suffered a broken nose, a broken jaw and a concussion in a crash he only remembers parts of (but you wouldn’t know it looking at him today).

During his recovery, a friend did what friends do and gave him some movies to watch. Among them was the Tom Cruise-Penelope Cruz flick, Vanilla Sky.

For those who haven’t seen the 2001 sci-fi thriller, it tells the story of a man disfigured in a car accident who, unbeknownst to him, lives in an alternate reality through the work of a futuristic company specializing in cryopreservation.

Alone at times with his thoughts, Esparza wondered if that was his reality. What if he was a real-life David Aames? His rationale won out, but:

“After that, I started thinking: What if my dreams could just be real?” Esparza recalled. “And I’m a painter, so I can just make them real.”

“Those were kind of the themes I had been working on before the accident, but they really took hold after seeing that movie, after the accident and after more painting, because I couldn’t really do anything else.”

‘Maybe I kind of hit something with this’

When Esparza launched the Etsy shop this spring, he grew accustomed to getting about an order per month, and to the excitement that accompanied the purchase notification on his phone.

Those notifications – for which the default notifier is a cash register sound – are far more common these days. In the 30 minutes we talked over Skype, he received at least a dozen orders, and he was only fazed by the distinct tone once: the time he had to explain to me what it was.

“It just kind of feels like, what is happening?,” Esparza said of his booming online business.

The original oil painting of the Whataburger cottage sold online within an hour of his posting it.

“That’s when I thought, ‘Maybe I should do more of these. Maybe I kind of hit something with this,’” he said.

Still, it wasn’t instant success. He’s sold prints at art markets throughout San Antonio for months, but they didn’t get noticed all too often.

Not until a couple high-profile media outlets picked it up. A Jezebel writer tweeted about Esparza’s Etsy shop on Dec. 10 – ironically the 17th anniversary of the release of Vanilla Sky.

The rest is history, as they say.

Fox News, Texas Monthly and several local Texas media outlets have picked up the story. Hence the 1,000-plus orders now placed at meyouandart.

‘In a room full of art, I’d still stare at you’

Alas, the oil paintings aren’t Esparza’s only venture in art. While the prints were going viral, he was showing his 3D art in a solo show in San Antonio. It opened on First Friday, a big art market there, with the title, “In a Room Full of Art, I’d Still Stare at You.”

Esparza wanted the exhibit to exude love and affection – a nod to the dates that take place at art galleries. The walls have heart-shaped mirrors. Athena, the goddess of love, is the centerpiece. Origami cranes – Esparza’s signature – grace the display in intricate floor-to-ceiling arrangements.

“It’s a whole little date that I’m like, ‘Here you go, guys. Impress this girl, and tell her that you’re artsy,” he says.

A proud Texan and a wingman for all the men of San Antonio?

Not all heroes wear capes, I guess.