Baylor University has fired university president and chancellor Ken Starr due to the university's sexual assault scandal, our sister station in Waco, KCEN-TV, has confirmed. 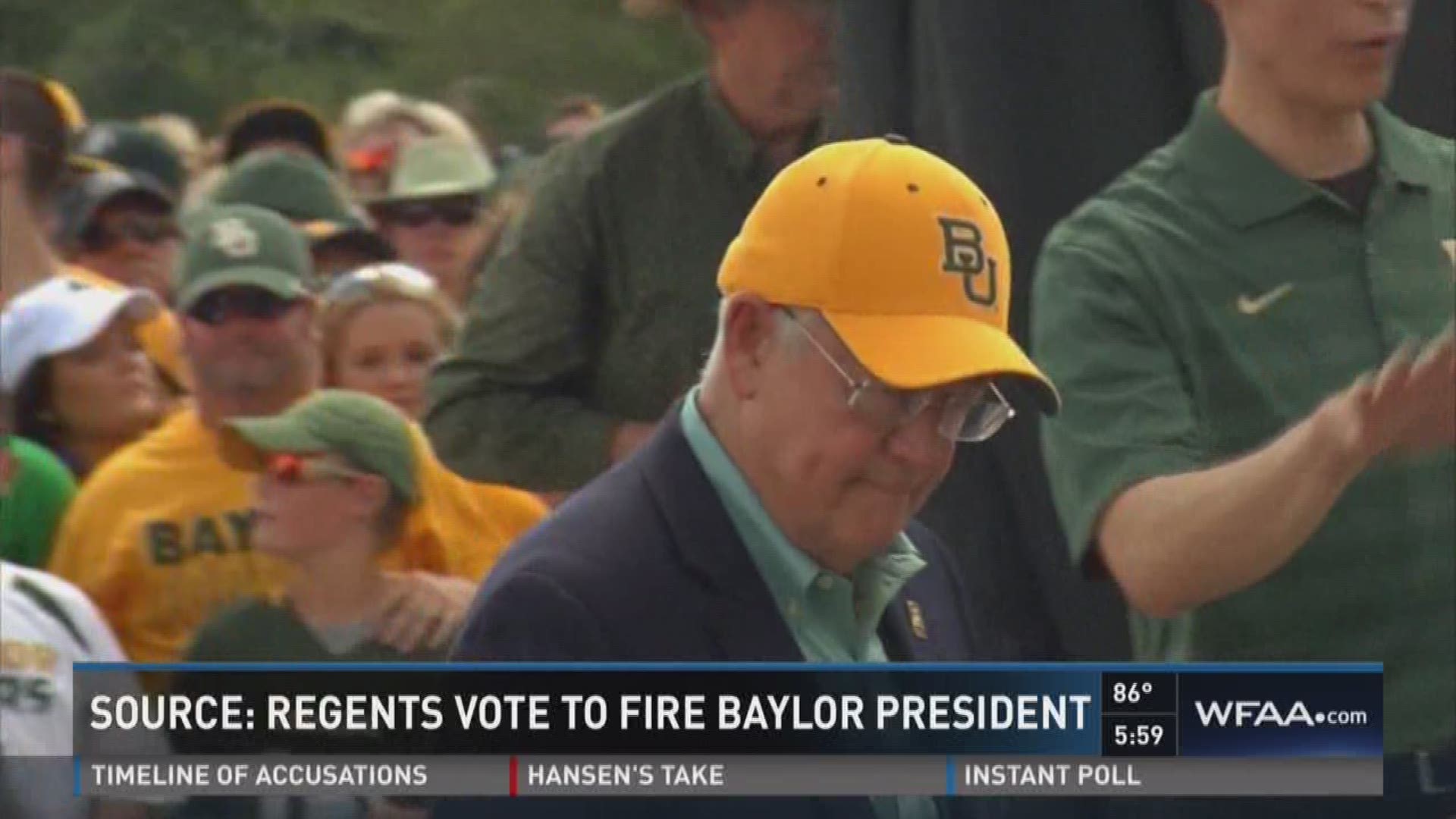 WACO, Texas -- Baylor University's Board of Regents has voted to fire university president and chancellor Ken Starr due to the university's sexual assaults scandal, our sister station in Waco, KCEN-TV, has confirmed.

The home of the Bears was in full summer hibernation Tuesday. Baylor officials refused to comment on reports that University President Ken Starr had been fired by the Board of Regents. In a statement Tuesday, the university denied Starr had been fired and insisted regents are still deliberating and that Starr is still the president.

“What I would love to see from this is there is more justice for girls in this situation and more ways for their voices to be heard," said Braden Guess, a UT student visiting Waco.

Baylor University President and Chancellor Ken Starr runs onto the field with the Baylor Line before their game against the Kansas State Wildcats on December 6, 2014 at McLane Stadium in Waco, Texas.

A statement released by the university earlier Tuesday said Baylor expects to make an announcement regarding the board of regents' decision by June 3, after they finish reviewing an investigation by an outside law firm into the university's handling of sexual assault claims made against athletes in its football program.

"[W]e anticipate further communication will come after the Board completes its deliberations," the statement read. "We will not respond to rumors, speculation or reports based on unnamed sources, but when official news is available, the university will provide it."

Chip Brown, a reporter for HornsDigest.com, first reported Tuesday morning that "multiple sources confirmed" that Starr had been ousted by the Baylor Board of Regents.

“My hope is that he is not a scapegoat for someone else who should be punished for it," said Zach Johnigan, a Baylor graduate.

Starr has served as president of Baylor University for six years. Brown reports Starr has been removed as school president and chancellor, but offered him a leadership position in Baylor's law school.

In August 2015, former Baylor football player Sam Ukwuachu was found guilty of the sexual assault of a female student athlete that occurred in 2013. The case brought scrutiny to Baylor University and the way that the school handles sexual assault cases.

In September 2015, Baylor's Board of Regents initiated an external review of the university's response to reports of sexual violence to be conducted by Pepper Hamilton law firm.

Our content partners at the Star-Telegram reported on May 18 that the university's board was considering firing head football coach Art Briles.

"The board is expected to keep Briles, but two sources indicated firing him is being considered as the final solution to a scandal that continues to be a nightmare for the entire school for what is now approaching a full calendar year," wrote Star-Telegram columnist Mac Engel.

Pepper Hamilton returned their investigation to the university on May 13 to be reviewed by the board.

While the board was reviewing the investigation, ESPN's Outside the Lines released another report alleging several other disturbing violations.

"According to the police documents, at least some Baylor officials, including coaches, knew about many of the incidents, and most players did not miss playing time for disciplinary reasons," Outside the Lines reported.

Pepper Hamilton's investigation has not been made public.