Garrett Tolliver's grieving family and friends are outraged the 18-year-old died in what they call a senseless police chase. They gathered on the steps of the Ellis County Courthouse recently to demand answers. 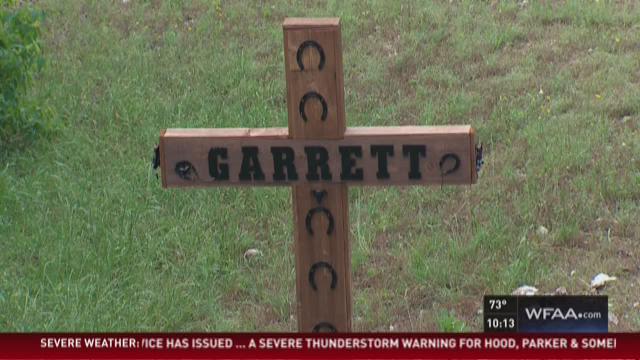 WAXAHACHIE, Texas -- Garrett Tolliver's parents are on a journey to try to make sense of his death.

"No answers. I don't have a single answer," his mother, Stacey Tolliver Whitney, told News 8.

Garrett's grieving family and friends are outraged the 18-year-old died in what they call a senseless police chase.

They gathered on the steps of the Ellis County Courthouse recently to demand answers.

"Why is Garrett not with us today?" his mother asked. "Over a senseless stolen van, equipped with a GPS System."

Garrett Tolliver's grieving family and friends are outraged the 18-year-old died in what they call a senseless police chase. They gathered on the steps of the Ellis County Courthouse recently to demand answers.

Police tracked a stolen van there using GPS. They then chased the suspect for miles.

On the website Broadcastify, you can hear the radio traffic from that day.

Waxahachie and county authorities were in pursuit. You hear officers from all over the county rushing to get in on the chase, even though the van is being tracked electronically.

"It's a delayed timer on the tracker," the dispatcher says on the audio.

The driver eventually went down Highway 287 the wrong way, and slammed head-on into Garrett's truck.

Stacey found out about her son's death through social media.

"I had to find out from phone calls, from Facebook with people seeing my dad's truck with a blue bag laid over the passenger seat," she said.

Garrett's parents want to know why it was so important for officers to chase a stolen vehicle.

"Now, he's not here, the other guy is not here," said Garrett's father, Jack Whitney. "They didn't accomplish anything. They didn't get the van back -- it burned up."

And now, they are left to pick up the pieces.

Garrett's family says, for months, they've repeatedly requested information from Waxahachie police and the Ellis County sheriff and were repeatedly told no.

So now, they are launching a campaign for answers and change.

"This is only about saving more lives, so no one else has to go through this," Mrs. Whitney said.

They want policy changes in Ellis County similar to what the Dallas Police Department has done.

In 2006, DPD changed its chase policy to prohibit officers from chasing a suspect unless the person is wanted for a violent crime.

USA TODAY recently found that, nationwide, nearly 12,000 people have been killed in police chases. Most were killed in chases involving misdemeanor crimes.

"For sure, the guy who stole the van is at fault, but it seems like if they had different policies, it wouldn't have happened," Mr. Whitney said.

Garrett's family also wants police to take a look at new equipment and an app that would allow officers to send out an alert from their vehicles to people's phones when there is a chase in progress.

"His death needs to be for something -- to have a reason," his mother said.

This Memorial Day weekend, Garrett Tolliver's family will be at their home, remembering Garrett. They say it's tragic that families continue to bury loved ones while police hold on to old and outdated policies.

Both Waxahachie police and the Ellis County Sheriff's Office declined to talk to News 8 for this story, citing pending litigation involving the Whitney family.