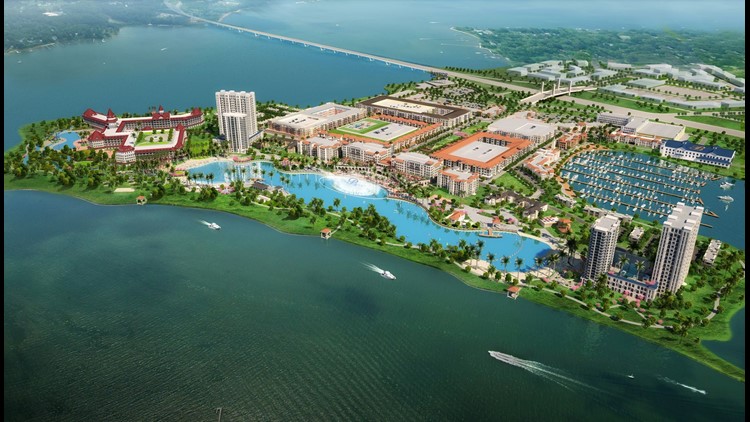 A rendering of a proposed $1B mixed use developement in Rowlett near I-30 &amp; Lake Ray Hubbard was released on April 7, 2016. The project is slated to include an 8-acre lagoon.

City of Rowlett sues developer of $1B lagoon-anchored project

Following months of unsuccessful negotiations, the city of Rowlett has ditched the developer of a peninsula at Lake Ray Hubbard that was initially supposed to feature a large, manmade lagoon.

The city formally notified Bayside Land Partners LLC and Bayside District Partners LLC that they are in default of the Bayside development agreements, and the city filed a lawsuit in state district court in Dallas County seeking relief as a result of the developer’s alleged actions, according to a news release put out by the city Friday.

"The city of Rowlett is resolved that it will not settle for anything less than making Bayside a unique legacy project and world-class destination," the city's statement says.

City Manager Brian Funderburk called the developer's tactics "a textbook bait and switch." He said the city agreed to economic development incentives, approved density variances, secured state tax support for a convention center and made other decisions based on the initial agreed-upon vision for the project, which has since substantially changed.

The city and the Bayside entities had been working in a public-private undertaking to bring a $1 billion mixed-use development, also called Bayside, to Rowlett.

The city and developer entered into a series of development agreements that envisioned a 262-acre project with an eight-acre Crystal Lagoon, one-acre show fountain, and 1.75 million square feet of commercial space that includes mixed use entertainment, restaurant, office and retail space; a trolley; 45 acres of programmed parks; 4-plus miles of hike-and-bike trails; and a 500-room resort and conference center.

You can click here to see examples of actual Crystal Lagoons and renderings from across the country.

The Crystal Lagoon was supposed to support other water-related elements like private beach clubs, a zip line, a surf machine, electric boats and cruisers.

The trouble started in the spring of 2018, after Bayside District Partners LLC took on development duties for the project.

In June, the city issued Bayside a pre-default notice and an opportunity to fulfill its alleged obligations to develop the property, the city’s news release says.

Instead, during a special meeting of the Rowlett City Council held in July, the developer proposed significant changes to the original agreed-upon vision, according to the city. The changes included eliminating “the three most important differentiators,” according to the city: the large vinyl-lined lagoon, the show fountain and the trolley.

The new proposal also significantly reduced the entertainment, restaurant and retail space, and increased the amount of land area dedicated to residential uses. As such, the revised plan did not meet the parameters set forth in the public-private partnership agreements, the city said.

The revised plans also called for a build-out of 15 years, instead of the four-year goal spelled out under the previous developer.

In the July meeting, the new developer told the Rowlett council that creating an artificial lagoon isn't the best way to make the project alluring as an office and retail destination.

On September 18, the Rowlett City Council voted to reject the developer’s proposed revisions. Since that time, the city and developer have continued discussions, but those conversations have been “unproductive in reaching a solution,” the city’s news release says.

“Bayside is a public-private partnership, and our development partner is obligated to adhere to the vision for Bayside with which both parties are contractually committed; any changes to the vision require city approval,” Rowlett Mayor Tammy Dana-Bashian said in a prepared statement. “We are disappointed that it has reached this point and that we are forced to take this action.”

When developers first announced the Rowlett project, it was billed as being the first development in Texas to include a Crystal Lagoon. However, the Balmoral community near Houston, with a two-acre lagoon, now has that title. In addition, a five-acre Crystal Lagoon is under construction as part of the Windsong Ranch project in Prosper.

Rowlett's lawsuit says the city has relied on "misrepresentations" by the developer in making strategic land use decisions, agreeing to economic development incentives and approving requested density and structure types. Because of the initial agreed-upon vision, the city has adopted a tax increment reinvestment zone

to support the project, created a public improvement district, and secured state tax support for a convention center, the city said.

“This is a textbook bait-and-switch tactic,” Funderburk said. “We were promised and sold on a great project and after we fulfilled our obligations, we were shown a completely different one."

"The city has performed as required under the development agreements and it is clear that the developer has not and does not intend to fulfill its obligations," he added. "By filing this lawsuit, the city is seeking all available legal remedies.”

Crystal Lagoons, with U.S. headquarters in Dallas and Miami, has over 20 man-made lagoons underway across the nation, including five in Texas, plus more than 60 that are under negotiation, Kevin Morgan, executive vice president of Crystal Lagoons U.S. Corp., told the Dallas Business Journal in a recent interview.

The company is riding a wave of popularity despite the controversy in Rowlett, Morgan said at the time. He predicted in the previous interview that the Crystal Lagoon planned for the Bayside project would be "the magnet that will draw additional foot traffic and benefit the residential, the retail and the office."

"It will be the gravitational pull that will hold this development together, and it will make it unique and iconic," Morgan said. "Something the city of Rowlett has never had before."